Being told I had cancer didn’t play out like it does on the big screen. The doctor’s surgery wasn’t a large, impressive office space with plush furniture and framed achievements hanging on the wall. The announcement wasn’t slow and sympathetic. There was no “I’m sorry” or pamphlets on dealing with cancer. There was no box of tissues. It was a sterile clinic with white-washed walls, a selection box of latex gloves, an old-fashioned computer screen on an old desk, a bed and curtain rail and a cabinet of sterile hospital accoutrements.

“We’re sure”, said the doctor to my mam sitting beside me, who was sure as anything that they’d made a mistake. What made this experience even more potent was that 15 years previous, the same doctor delivered the same harrowing results to her. I sat still and quiet, frozen in my body and mind. I didn’t look sick or feel terribly unwell at the time. My instinct was to ask if I was going to die, but the doctor – well-experienced in the world of oncology – left no time for self-pity and patted me on the hand, told me she’d take care of me and shooed me away for bloods. The whole experience was over in less than 5 minutes – though looking back now, it felt like an eternity.

At 23 I was diagnosed with an aggressive bout of papillary thyroid cancer. The first time I heard the term “thyroid” I had to take out my phone and Google it. My thyroid – a butterfly-shaped gland located at the midpoint of the neck that controls the body’s metabolism, temperature regulation, how fast or slow you use energy and affects every single cell in the body – was riddled with cancer.

“A permanent scar now stretches from ear-to-ear – like a smiley-face: a bitter reminder of the fragility of the human body.”

Prior to my diagnosis, I was extremely tired all of the time; the kind of fatigue that knocks you for six. I used to fall asleep at my desk and on public transport. My body would fluctuate uncontrollably from cold to hot, I was losing weight despite eating well and I had a constant upper-respiratory infection that wouldn’t shift; even after three courses of antibiotics (it’s worth pointing out that this infection was initially blamed as the culprit for the other symptoms). I didn’t feel like me: I’m normally happy-go-lucky, but to add fuel to the fire, I felt sad and depressed more times than not. Then the lump appeared and my voice started to change.

Unlike more well-known cancers, like breast and ovarian, thyroid cancer can’t be attacked using chemotherapy, which was a massive bonus because I didn’t have to worry as much about infertility or hair loss. Instead, I had intrusive surgery to get rid of the tumorous thyroid and the lymph nodes in my neck to avoid any spread. A permanent scar now stretches across my neck from ear-to-ear – like a smiley-face: a bitter reminder of the fragility of the human body. A heavy dose of radiation after was enough to surely kick the disease into kingdom come.

“Cancer doesn’t care what age you are or where you come from.” 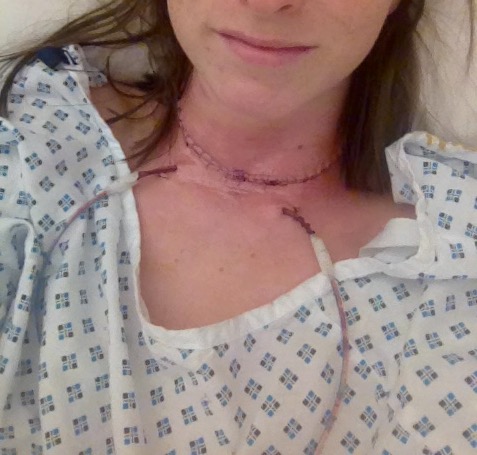 This Monday marked three years in remission; a cancer-free life. And yes, I say this with utter smugness, because I won the fight. And that fight is more important than ever – right in light of the on-going smear test scandal and the hundreds of lives at risk every day because of it. Being sick taught me so many important life lessons that I can’t possibly articulate in a few simple words but I will say this: it showed me that you have to be your own advocate for self-care. Nobody is going to take you by the hand and lead you to the doctor’s office. If you feel like something is wrong – anything at all – listen to what your body might be telling you. A lot of cancer stories are about older women who’ve experienced unrequited love, life, childbirth. It’s easy to forget that cancer doesn’t care what age you are or where you come from.

My body went into fight-or-flight mode and I found ways of coping when I thought I’d hit rock bottom. I got rid of toxic friends. It’s a general rule of thumb that when you’re experiencing any kind of unpleasant situation, you should only surround yourself with lovely, sound people. While this was tricky to do at first, I quickly learned who my true friends were – the ones who gave me true support, the ones who sat silent and offered me hours of company and the ones who made me laugh when I thought I couldn’t any more. Cancer can be incredibly isolating so support from family and friends is enormous. I needed to talk about being scared of dying, and the right people were by my side to listen. I compared myself to others. I think about Vicky Phelan, Rachael Bland, Emma Hannigan and Emma Mhic Mhathúna and the countless other women and men who’ve lost their lives to this disease. I opened my eyes to the bigger picture and approached situations in a different light: is a bad hair day really a bad hair day? Cancer gave me perspective. 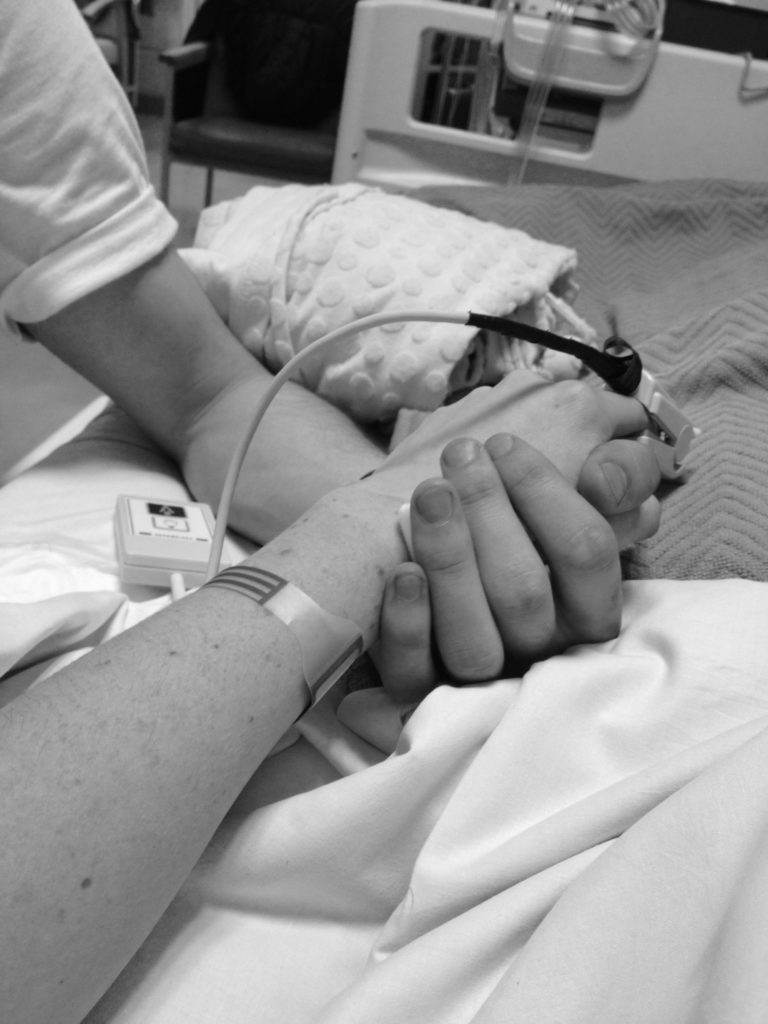 I found my strength. The gym became a safe zone where I didn’t have to talk about health or hospitals, I just focused on me, my breathing, and releasing happy endorphins. It helped me alleviate any stress or unwanted feelings and gave my immune system a little kick. And I ate cake. I nourished my body with all the goodness it needed and deserved. If I was hungry, I ate. If I was still hungry afterwards, I ate again. I scoffed all the cakes brought to me in the hospital without a morsel of regret. Life IS too short. Being diagnosed with cancer was like a poignant reminder to be more kind to my body.

I told myself that scars are beautiful. My body had gone through so much trauma in such a short amount of time, that I was feeling extremely conscious and down about my new scars. For three days after I had surgery on my neck, I refused to look at myself. We made jokes about how I looked like Frankenstein’s wife, but I really did feel like a monster for the longest time after having surgery. Now, I wear my war wounds with pride and I really do think that they’re beautiful, despite what internet-culture might say. I’ve made peace with my lumps and bumps.

While these coping mechanisms won’t work for everyone, they played an important part in restoring my physical health while keeping my mental health in check. I believe in the mantra that what you put out to the universe, you get back – positive attracts positive. I continue to live my life this way and I feel ready for any challenge that life throws at me. So next time you think that you #cantcope, remember that you can, and you will.

Sentenced to death by cancer: we made promises this would never happen again

We need to talk about cancer

Skin cancer: how much do you really know about it and SPF?

One family’s story: Fleeing Kyiv to Ballydehob with their son (5) who has leukaemia