Oscar nominee Lesley Manville has signed up to play Princess Margaret in the fifth and final series of The Crown.

In a statement posted on Twitter, she says she “could not be happier” to join the cast of the royal Netflix drama, which will follow the Queen’s life from 1947. 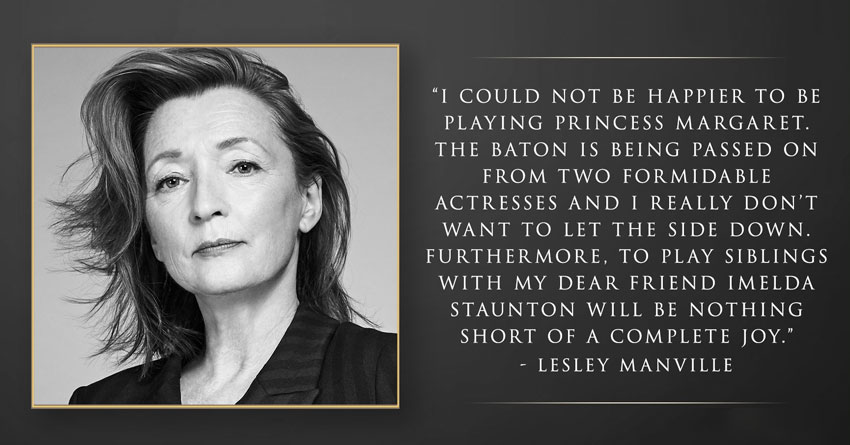 Lesley Manville replaces actress Helena Bonham Carter as the Queen’s younger sister, a role that has also been played by actress Vanessa Kirby.

Related: First look at Gillian Anderson as Margaret Thatcher in The Crown

It was announced earlier in the year that the role of the Queen in the new series would be played by the Oscar-nominated actress Imelda Staunton, following in the footsteps of actresses Olivia Colman and Claire Foy.

Lesley Manville and Imelda Staunton are “dear friends,” says Manville, and have previously worked together in several Mike Leigh films, in Disney’s Maleficent franchise and both star in the current BBC adaptation of Alan Bennett’s Talking Heads.

In a statement on The Crown’s Twitter page, Lesley Manville said: “I could not be happier to be playing Princess Margaret. The baton is being passed on from two formidable actresses and I really don’t want to let the side down. Furthermore, to play siblings with my dear friend Imelda Staunton will be nothing short of a complete joy.”

Season four of The Crown, with Emma Corrin as Princess Diana and Gillian Anderson playing Margaret Thatcher, will air on Netflix later this year.

Read more: First look at Gillian Anderson as Margaret Thatcher in The Crown