Irish women now – they’re driven, perceptive and at times, provocative. IMAGE meets eight intriguing creatives who are challenging the status quo and influencing Ireland’s cultural landscape through their achievements, and striking a chord with modern women everywhere. These pioneers don’t just prove that the connection between women is exceptionally profound, but collectively, we are capable of achieving incredible things.

At Laura Callaghan’s solo exhibition, which took place this summer in a Hoxton gallery, visitors were likely to be amused, but also disconcerted if they tend to engage in faux-positivity on social media. Entitled Aspirational, her collection of vivid watercolours was inspired by the utterly irritating, essentially useless urgings that clutter up feeds. Think banalities like ?Travel doesn’t become an adventure until you leave yourself behind? and ?Give a girl the right shoes and she can conquer the world? – although the sullen girls depicted in Callaghan’s work do not appear to be living out their aspirational dreams.

But the 29-year-old illustrator says that she’s part of the Insta-generation, and that it’s completely integral to what she does. In making fun of it, she’s making fun of herself as well – wink-wink and satirical perhaps, but not contemptuous. ?It’s not really meant in a mean or negative way, but it’s important that we take a look at ourselves,? she says. ?I wouldn’t have the career I have now if it wasn’t for social media, and I use it in my personal life as well – everybody uses it. I have positive feelings towards it, but at the same time there are aspects of it that I really don’t like and I think are damaging.

?Everything is curated and edited, and I think for younger people looking at some of those images, there isn’t really the realisation that it’s almost staged and that this isn’t real life. It puts a lot of pressure on people.?

Callaghan, who is originally from Dundalk, studied visual communications in NCAD, but knew that traditional graphic design/typography/ logo jobs weren’t for her. She completed a master’s in illustration in Kingston University, London (she’s now based in Peckham) and has worked as a freelance illustrator for the last six years. A weekly fashion illustration for The Sunday Telegraph set her on her way properly, and she’s been steadily building up her career ever since. 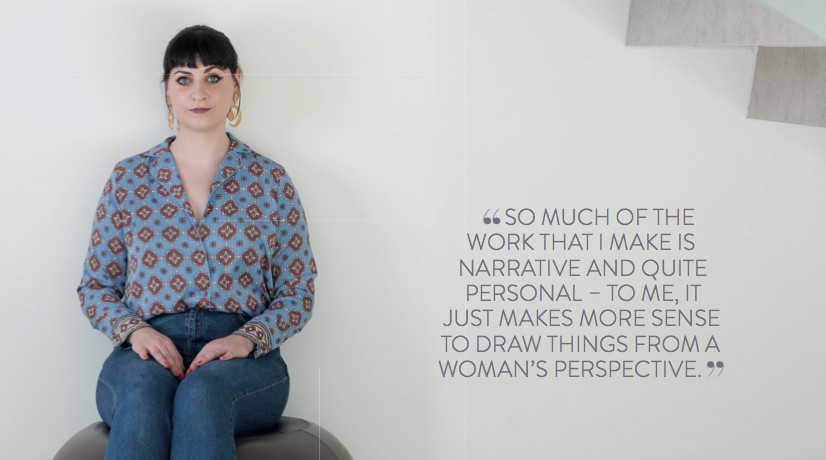 Her CV includes interesting projects such as a collaboration with playful London jewellery company Tatty Devine, featuring women from her watercolours, digitally painted onto acrylic necklaces. She also recently flew back to Dublin to attend a screening of RTE?’s new (and already cult) comedy series Can’t Cope, Won’t Cope, for which she designed the opening credits. And while it didn’t happen by any design on Callaghan’s part, a mural she painted outside Tictail Market on the Lower East Side in New York, turned up this summer in a video by the band Warpaint, the indie darlings whose influence is wide-reaching.

Her work centres on the lives of women, but Callaghan says this wasn’t really a conscious decision on her part.

?So much of the work that I make is narrative and quite personal – to me, it just makes more sense to draw things from a woman’s perspective,? she says. ?But yeah, those are the things that interest me – how women lead their lives…? The process for her personal work, as opposed to what she’s commissioned, starts with note-taking on her phone, observing things about her day-to-day, which could be a shop sign or a book. Once she has her idea for a piece, she will do lots of Pinterest boards and start with a rough pencil sketch, blowing it up to the size that she wants to work at. She likes to use watercolours and get lots of small details in, using very tiny brushes. The paintings can take 50 to 60 hours from start to finish, give or take some false starts. ?I find the whole painting and drawing very relaxing and soothing, the thing that I know that I can do that I’m good at. There’s a comfort in that as well,? she says.

Next up? ?I think I just need a break. I’ve been doing lots of commissions and I want to take some time out to do a comic because it’s something I’ve wanted to do for a while.?

This article originally appeared in the November issue of IMAGE magazine.