Ireland Officially Loves Chocolate! Here’s Why It’s Good For You

A recent study by Forbes has told us something that we’re pretty sure we knew already: the Irish are fond of their chocolate. According to their study, we are the third highest chocolate consumers in the world, just below Switzerland and Germany. Ireland consumes 16.3 Ibs per year, which means we have a very sweet tooth altogether. 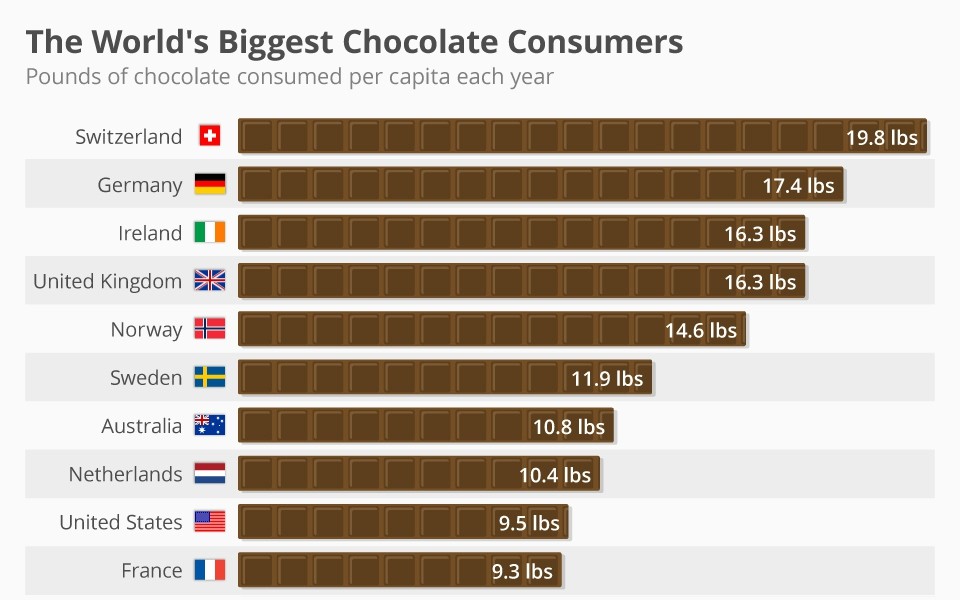 We know you can have too much of a good thing (and over snacking on chocolate can damage your teeth and all that), but numerous studies have found that eating chocolate – in reasonable amounts of course – can be good for your health. Here are a few of our favourite reasons to grab that chocolate biscuit with your next cup of tea:

Researchers at Harvard University in the U.S. studied 8,000 participants for 65 years, and found that those who ate modest amounts of chocolate up to three times a month, lived almost a year longer than those who didn’t eat any. This is likely to be due to the fact that cocoa contains antioxidants, which prevent the oxidation of harmful cholesterol.

A study from Tel Aviv University revealed that eating chocolate early in the day could help deter cravings for sweets and other unhealthy foods later on. Chocolate cake for breakfast? Don’t mind if we do! Not the whole thing, mind.

Chocolate Doesn’t Give You Spots

The word around the campfire used to be that eating excessive amounts of chocolate could give you acne, but it’s been proven that it doesn’t actually cause breakouts. Dark chocolate is actually very good for your skin. According to German scientists, the flavonoids found in dark chocolate protect women’s skin from the sun’s UV rays. This doesn’t mean you can skip the sunscreen though.

According to Science Focus, a study in the Journal Of Psychopharmacology found people who had a 42g dark chocolate drink a day felt more content than people who did not. Junee Sangani, a dietitian and spokesperson for the British Dietetic Association, explains why: ?The improvement in mood that people can get from eating chocolate comes from the release of serotonin and endorphins – the feel-good chemicals – in the brain.? Happy days.

Fulfilling your chocolate craving during that annoying time of the month is actually a good idea, who’d have thought it? There’s a reason why chocolate is called comfort food, and it’s because chocolate releases calming endorphins that can reduce anxiety. It is also high in magnesium and reduces water retention and banishes the blues. Like we needed another reason to treat ourselves to our favourite Cadbury’s bar of choccie.

Those are just some of the reasons that you can feel good and eat chocolate, so go forth and enjoy this weekend.