It’s that time of year again! Nominations are open for our Businesswoman of the Year Awards and we are looking for women from all walks of the business world who are out there smashing ceilings, pushing boundaries and just generally working to make things happen. And on that note, this week, we spoke to a woman doing just that, Jeanne Mahony, the co-founder of?Hope Craft Beer?-??a range of premium craft beers brewed at Howth Junction in Dublin.

Craft beer is an industry typically dominated by young men but this hasn’t stopped?Jeanne – or the brand – from becoming a great success in a very short space of time (it was founded officially in late 2015). This is a woman who is involved in every aspect of its day-to-day; from sales and marketing to bottling and tastings, she uses her skillsets and expertise – she speaks no less than four languages – and was an?instrumental driver of the company’s development, alongside her co-founders. In fact, to say she’s a Jack/Jill of all trades would be more than apt.

Hope was founded by a group of old school-friends with a passion for business – and it’s distinct in that each beer of theirs has its own distinct name, story and taste experience. What started out as a series of late-night kitchen table discussions is now an award-winning brewery with a hugely talented woman at the heart of it.

She spoke to IMAGE.ie about getting a startup off the ground that bit later in life, being a woman in a man’s industry and what advice she’d give to other women trying to get their businesses off the ground.

Tell us how you came to co-found Hope Craft Beer?

I spent more than 12 years living in Europe – 8 years in the Netherlands (my husband is Dutch!) and a further 4 in Switzerland. During this time, we observed so many local breweries, making fantastic produce and enjoying local support. Although we weren’t in a position to start our own brewery at that stage, it is something we often discussed.

A very good Dutch friend of ours started to add craft beer to his restaurant/retail business in Amsterdam and he built two breweries over the last five years or so. He had knowledge and expertise that we could tap into and he wanted to be our partner in an Irish operation so finally, in early 2015, we carried out an in-depth feasibility study with the help of Fingal LEO and the project was born! But it really wasn’t until April 2016 when tour German brewery was delivered and commissioned at Howth Junction that the business became a reality.

How would you describe your role within the company?


I look after any ?projects? like Origin Green, Food Academy etc. Marketing activities around packaging, branding, all social media, festivals, events also fall at my door. I also do retail sales and some deliveries (out of the back of my car!) as well as overseeing exports.

I love being a woman in a man’s world – it helps me stand out.

What challenges had you never anticipated?


My biggest challenge is time management. I struggle to make notable achievements on a day-to-day basis. The list of stuff to do is endless and I feel I never even get close to the end of it! However, I know this is a feature of many start-ups. Managing the home/work balance is much more difficult than I anticipated. I am a wife and mother as well as a businesswoman and this is a tricky balancing act! 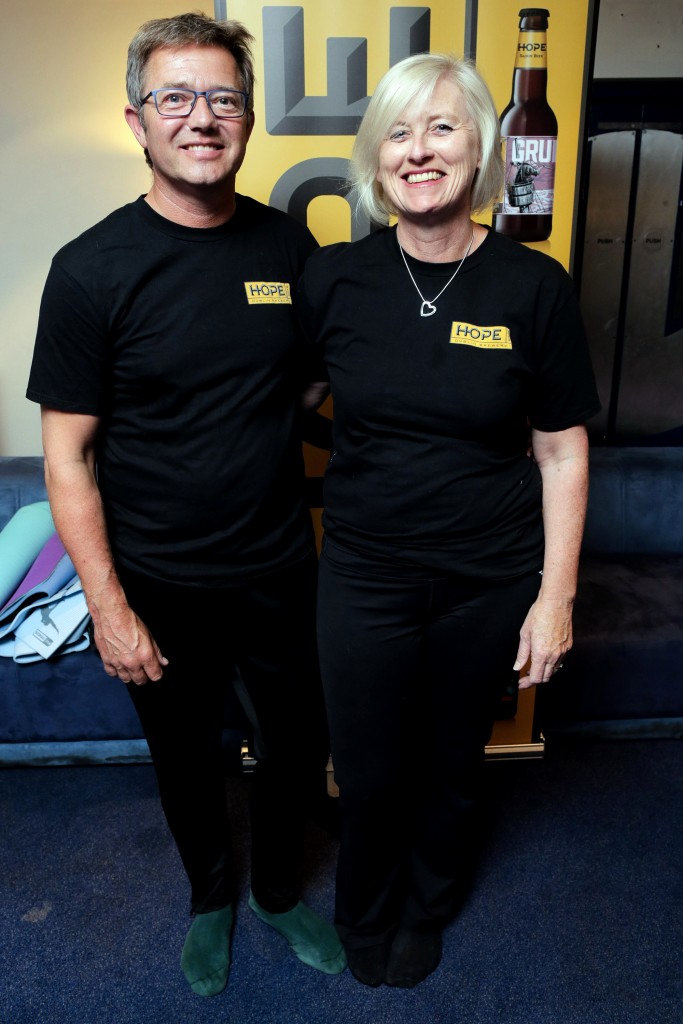 Jeanne with her husband and Hope co-founder, Whim

As you work in an industry typically dominated by men, has anything stood out to you as a working woman within it?


I love being a woman in a man’s world – it helps me stand out. We are an unusual start-up bunch anyway because of our age so, the 50-something female is a unique position. I also get on well with a couple of other women in the industry so it’s nice to know there’s a few of us around.

What advice would you give to other women who are trying to get their businesses off the ground?

Organise the home front first! Whether this is help with child-care, cooking, lifts, cleaning, supermarket shopping etc. realise you really can’t do it all. Having your own business is not a 9 to 5 job and you need to be flexible. This is not possible if you have a school collection or dinner to cook! Sort your wardrobe! You won’t have time to stare into the wardrobe looking for inspiration – have a couple of go-to outfits ready. Have a plan – the more detailed the better but don’t be afraid to deviate from this. The beauty of being your own boss is that YOU decide on how your business should develop. Don’t be afraid to trust your own judgement.

What’s the best piece of advice you were given starting out?

What advice would you give your younger self, knowing what you do now?

Stay in the game, even with some part-time projects as it is really difficult to go back to work after a long absence.

Have you any new projects coming up for Hope that you can tell us about? ?

We are really excited about plans to expand brewery capacity which will take place in 2018. We are also starting to develop export markets which will bring a whole new set of challenges as well as opportunities.