IMAGE Exclusive: A Moment With Ma

In many ways, Maia Dunphy has managed to perform the unthinkable in public life. The TV presenter, writer and producer confidently and honestly commands the small screen through her documentary work but has largely resisted the world of celebrity madness. On the day of our shoot, she’s humble and gracious, placing her trust in the assembled team, but also not shy about offering her opinion, even after a night of very little sleep, courtesy of her one-year-old son Tom. ?My baby had the squits, so I was up most of the night with him,? she openly confesses three minutes into our interview. We meet in the Westbury Hotel several days after the shoot and she’s cleverly making an evening of it – her parents are babysitting Tom, who has thankfully since recovered.

Based in Richmond, London, Dunphy has been back in Ireland for several weeks while her husband comedian Johnny Vegas has been touring. The family will be reunited in Dublin the next day but,?for now, our cover star is enjoying her evening of independence.

She admits anxiety pre-shoot and candidly recalls the day on set. ?I arrived, apologising for how bad I looked. I realised if my fifteen-year-old self could see me now she’d be so excited, so just shut up and enjoy it.? Enjoy it she did and it showed. ?When I left the shoot that evening strangers were so nice to me,? she says. ?I forgot how much makeup I had on and how nice I looked. When you’re not 21, and you’re tired, make-up tends to just sit in the creases on your face, but I just felt lovely that day. Maybe I was skipping around the streets of Dublin and people were reacting to that,? she concludes. ?I might need to be happier more often!?. 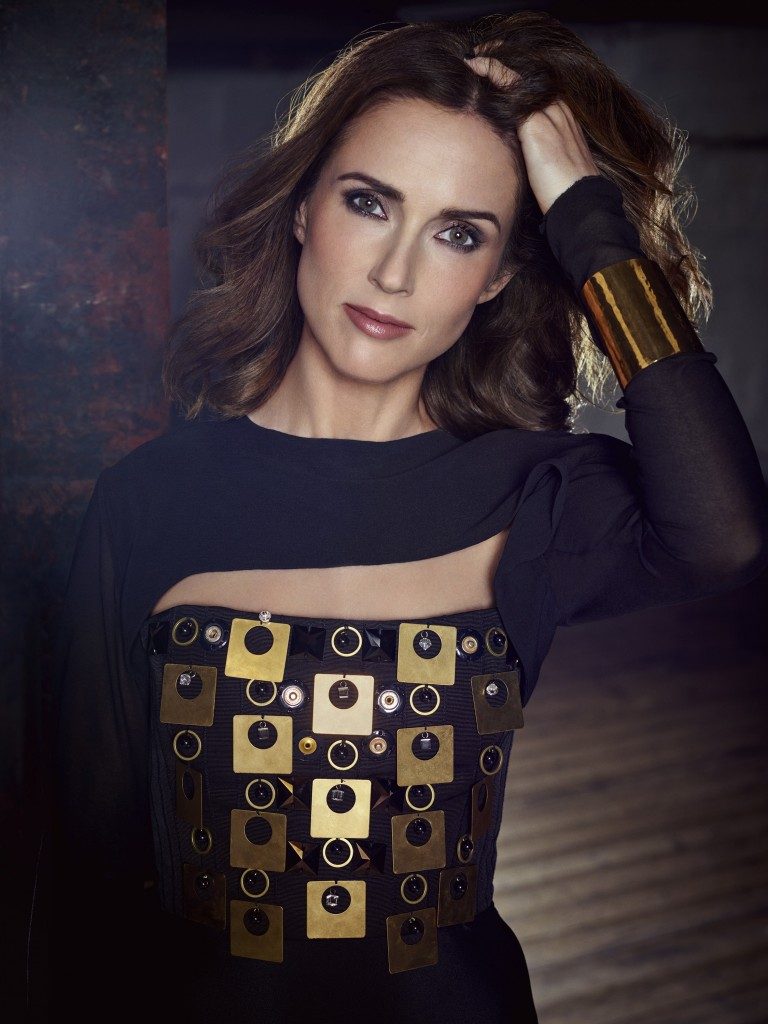 Dunphy’s sincerity is refreshing and one of the reasons, after many years working behind the camera on shows such as Podge & Rodge, she made such a successful on-screen debut hosting the documentary From Boom to Maternity in 2012. She has since written and hosted a number of successful TV documentaries including the critically acclaimed Merlot & Me and the four-part What Women Want series. Her ability to break down complex female-centric topics in a way that connects rather than condescends her audience is captivating. While caring for her young son, Dunphy has temporarily stepped back from front-of-camera work, but has engaged with fans through her popular Facebook page The M Word, a blog for ?women who happen to be mums?. Despite claiming to have ?the lowest self-esteem of anyone in the world? she found this new project empowering. ?I initially resisted doing a blog because I felt I had nothing new to add. I thought I’ll raise my son as best I can, but I don’t have any knowledge to impart. I’m just a moron finding my way. It turned out being a moron finding your way is how everyone feels. Women have more education than our mothers or grandmothers had and want more out of life. We are the women who thought we could have it all, and are discovering it’s tough. Most of the women I interact with are really bright, funny, cool women who are also mums.? The tabloids reported this blog as Dunphy’s way of ?taking on the kale chip brigade?; something she resists. ?I’m not taking anyone on. The one thing I’ve learned about motherhood is not to judge anyone. All I said was there is enough websites offering support with breastfeeding and 25 ways with kale and sweet potatoes. I said that slightly irreverently, and I didn’t mean to offend anyone. I just think that’s been done and it’s not that I don’t care about those things it’s not what I wanted to do. I wanted something to laugh at when I was so tired and felt like sh*t. It’s about finding the light.?

“I had felt quite lost. At 39, you think you should have this, know what you’re doing. But you never do. It’s nice to have other people tell you you’re not a freak in that way” 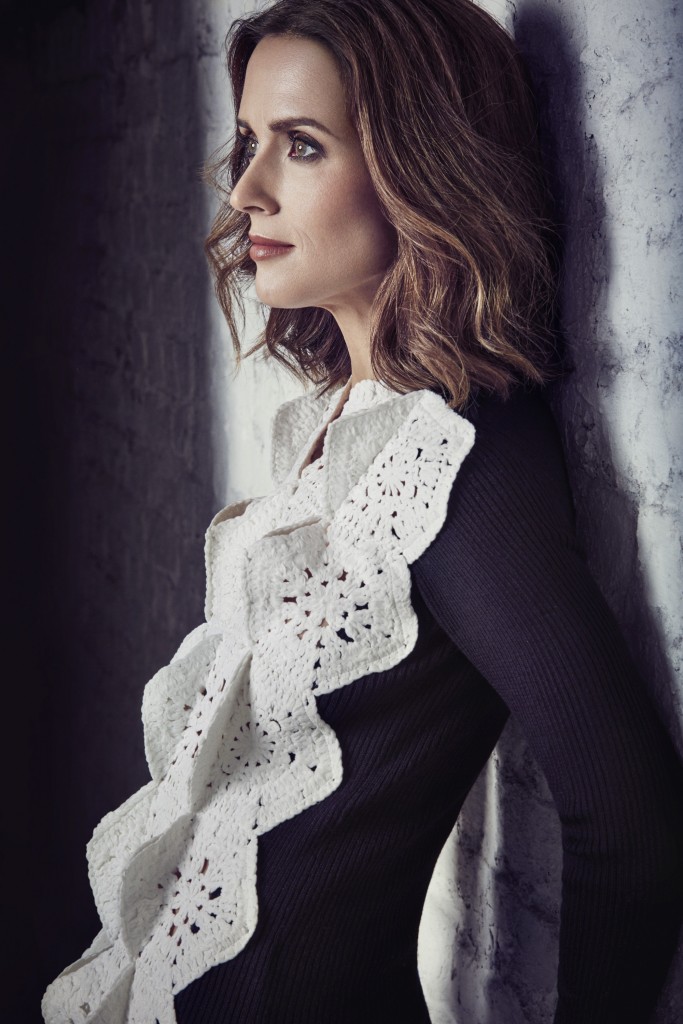 The response has been overwhelming attracting an impressive 475,000 readers a week and the page is to get its own website this month. ?This woman was walking past me with her one-week-old baby recently and stopped me to say my Facebook page is keeping her sane at 4am. That’s happened to me about a dozen times since I’ve been home – more so than with anything I’ve done on the?telly. And that does feel really empowering to me because I had felt quite lost. At 39, you think you should have this, know what you’re doing, but you never do. It’s nice to have other people tell you you’re not a freak in that way.?

Ma?a opted for a scheduled C-section for the birth of her son – not from fear of labour, but a need for some form of control. ?I was in London and the thought of my waters breaking in a supermarket and not having anyone to call over there made me anxious, I just wanted to go into hospital and know what was happening. I had [Tom] on the NHS and I never saw the same doctor twice. On my last appointment, I went in and I was feeling almost sick with anxiety and the doctor said; ?oh yeah, you’re going in next week, everything looks fine?. I told him I was feeling really, really anxious and saw him roll his eyes. It was awful because I could have been really bereft. Instead, I walked the half an hour home sniveling to myself,? she recalls. ?I kind of feel sad for me now. You can’t have regrets. Regrets are futile. If I was here I might have done it differently, but I wasn’t and I did get great care. Not necessarily the personal touch but everything was fine.?

Sitting in the now-busy lounge, overlooking a bustling Grafton Street, the presenter confesses she misses home and the support of her family, particularly since the birth of her son. ?It’s not cool to admit you’re lonely, I think, but all my friends in London are living a different life than I am. I have no one to mind Tom. I don’t mind not going out, but when you’ve just moved somewhere and you don’t know many people, it’s lonely. Our neighbour is 89 and she was my only friend for the first six months. That was really tough.? Her isolation was confounded by huge personal upheaval including living with her husband for the first time (the couple married in 2011), pregnancy and caring for her 13-year-old stepson Michael. ?It’s been a huge change,? she admits. ?The majority of divorced dads have their kids every second weekend, we have him every second week, but he’s such a nice, nice boy. He’s a very caring little fella.?

Ageing is a recurring topic in our conversation, and not because she fears it, quite the opposite. ?No one has ever commented about my age negatively, ever,? she says. ?Once you hit 40, you do start to feel the dread. I did, but it’s the one thing you can’t do anything about. You can lose weight, you can change job, you can’t change your date of birth so why let it haunt you. People say ?never say never? about Botox and fillers, but I will say never.? 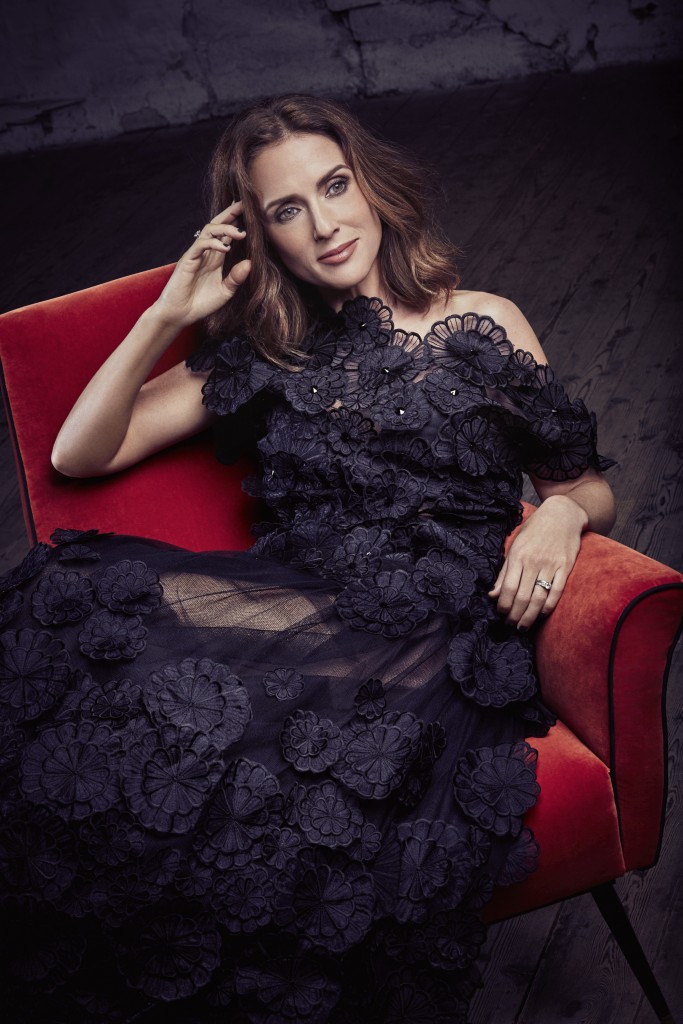 The lack of ageing women on television enrages her. ?In television, everything comes down to age. When I started, I was 35 and two well-known people said to me take five years off your age now before anyone knows who you are.? She ignored their advice and hasn’t looked back. ?I don’t look young now, but I used to. When I was 23 I got ID’d everywhere. I’ve been the same weight since I was 16, but I had these gerbil cheeks and looked so young. I always wanted to look like a grown up and it took me til about 35 to look my age.

? I feel so sorry for women and men, but more so women whose careers are set out from the get-go based on how they look because it can only go one way. We need to see more women at 40 and 50 and 60 on the TV who look their age. Look at Clare Balding, she’s such a brilliant presenter. I’m not a big sports fan, but she’s really engaging. I think it’s really important for younger women to see older women on TV, expressing their opinions and being allowed to grow and develop. Women who have interests in sports or culture or movies, women’s issues or whatever it might be. I think it’s really disingenuous to say that people don’t respond to older females. I also think we can’t presume younger women have no interest in what older women have to say. Look at Anne Doyle. She’s our Helen Mirren – she’s really engaging. And this thing about women becoming irrelevant over 50 is incredibly sad. I’m not into positive discrimination or female quotas either. I think if someone’s got an interest in a particular angle, let them go for it.?

Supporting other women is important to Maia and anyone who has followed her Twitter account can see she’s a genuine cheerleader for her sex. ?I don’t feel in the least bit competitive. I’m a worrier, but I have the confidence to know what I do and know that it’s different to what Angela Scanlon or Mairead Ronan does. It’s so important to be supportive of what other women do because if we don’t have each other’s backs, there’s no hope for us. I really don’t think somebody else needs to fail in order for me to succeed.?

The birth of her son has given Dunphy a lot of perspective on her life, but she still doesn’t hold back admitting feeling anxious, worried or lonely. In fact, she’s always been vocal about these topics. Rather than this making her appear weak, her strong character is the parting impression. Next month sees Maia commence a monthly column for IMAGE where she’ll explore more topics that touch women’s lives – all with a generous side helping of humour. Her voice is her superpower and whatever the platform, it’s encouraging to see she’s being heard.