IMAGE staffer Hannah Hillyer will run a marathon this year, and we’ll be following her every step

You’re waiting for me to tell you the secret, aren’t you? To spill the beans on the key to running. Sadly, it doesn’t exist, I’m sorry, I always thought there was one too. All those women gracefully running though the park, perfect ponytail swishing behind them, they must be made of different stuff than me. Spoiler alert: they’re not.

I run. I don’t have a swishy ponytail, and I don’t have that perfect ‘runner’s physique’ we all imagine. In fact, you’ll find once you start talking to the people around you, you’ll find they run too, and are all different shapes, sizes and ages. It’s a relatively democratic sport in terms of body type, so perhaps we just notice the ones that look perfect doing it rather then your neighbour slogging down the road for their weekly 5k.

So how to begin?

Go outside your house and start running, sounds easy huh? But it is literally as simple as putting one foot in front of the other, no secret, no magic key to doing it. The first time you go, a kilometre will feel like a mile and chances are you won’t be able to run the whole thing. You will feel every pounding thud of your step off the pavement, every jiggle of your thighs and each heaving breath in your chest as you embark on your first few runs. It will be bloody awful and you will hate it. Arriving back at your front door feeling, sweaty, tired, and more than likely horrified at how little you were able to do.

The first time I ever went I really thought I’d be ok, years spent on my feet in retail and being of a relatively slim build I thought I could run a decent amount before stopping. How wrong I was. Lumbering from my house to the end of the street felt like a marathon in itself that first run.

How to keep going

Get ready for a fitness cliche: it gets easier, really it does! The glorious thing about running is that in a short space of time you will see an improvement. In just two weeks you can get to the end of the road without feeling like you’ll die of cardiac arrest. Yes, you’ll still be sweaty and tired, but you can do it without stopping. Fast forward a few more weeks and you’ll be able to run a kilometre, or two, maybe even three.

It’s miraculous, seeing your body move from sluggish and slow to someone that can actually say ‘I went for a run last night’  is the best motivation

Most of us haven’t actually run for the sake of running since we were children – sadly legging it for the night-link home after four glasses of wine doesn’t count. Running was so easy when you were young, it was the source of all fun and a way to burn off all our excess energy. Now we’ve forgotten what it’s like to have energy to burn, falling asleep on the bus to work and clutching our morning flat white as if our lives depend on it.

So when it sinks in that you’re improving, that it doesn’t feel as gruelling as that first time, it keeps you going. Suddenly you begin to test yourself, going a little farther, a little faster even. It’s miraculous, seeing your body move from sluggish and slow to someone that can actually say ‘I went for a run last night’  is the best motivation, and it will keep you going. 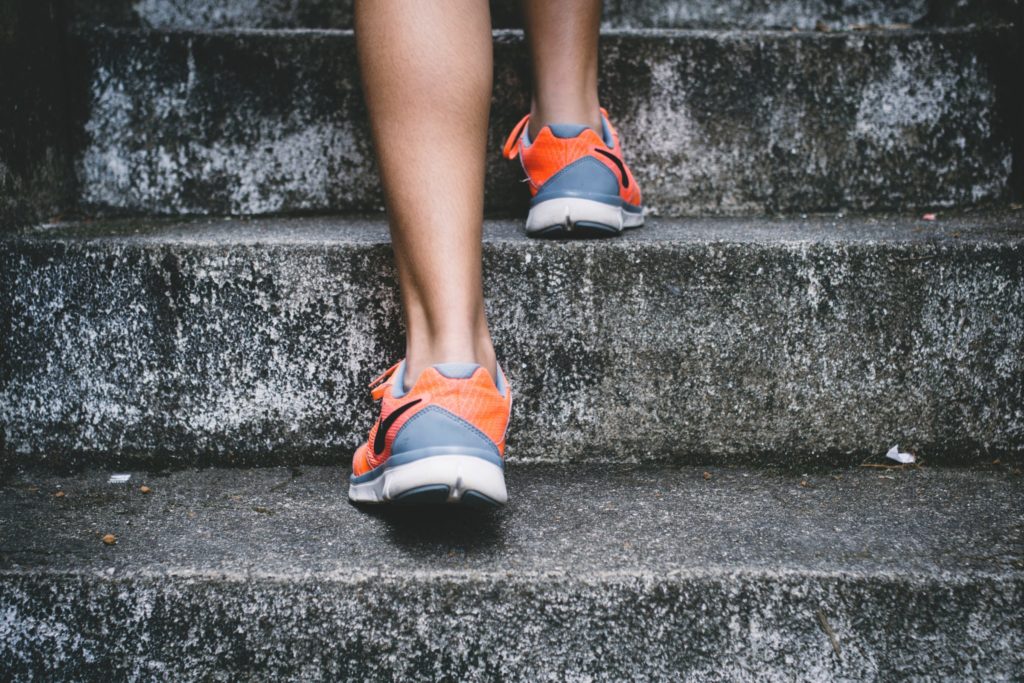 This may sound like a silly and superficial reason not to go for a run but it’s actually really common. When I first began running, I did so only in the evening when it was dark. The fear of passing another runner was one of the things I hated most. They’re going so much faster, they look so much fitter and professional, why don’t they look like they’re dying??

I don’t care what others think of me, as I’m patting myself on the back just for lacing up my trainers and stepping out the front door.

The more you get out there, and the more mileage you rack up, you’ll realise that no other runner is judging you. You have nothing but respect for those who drag themselves away from the TV on a cold February evening and pound the pavements. An IMAGE staffer told me recently that a man running in the park one day gave her a high five as she ran towards him. There is a feeling of solidarity amongst runners, seen in the quiet nods, the smiles of encouragement and the occasional high fives between strangers.

Ask yourself, when you see someone out for a run is your instinct ever really to make fun of them? Almost 100% of the time, you will look at them with respect that they’re out slogging away, no matter what their size or pace. This took a lot of time to drill into my own head, and now I don’t care what others think of me, as I’m patting myself on the back just for lacing up my trainers and stepping out the front door.

Related: Weather-appropriate and stylish running gear is not a thing of myths

Last year I completed Tough Mudder (albeit with a lot of breaks to catch my breath and climb walls). I felt like an Olympic athlete and promptly went to Spain the next day to drink wine by the pool and eat for a week. That was July, after months of promising myself I’d keep that level of fitness up it slowly slipped away and I barely managed a run a fortnight.

It’s been my dream for a long time to run a marathon and at the end of 2018 I decided that this would be the year.

Now I’m back to square one, but this time with a much bigger goal in mind. Setting a goal is a fantastic way to push this newfound running hobby into something more fulfilling. Choose a run far enough in the distance to train for. This could be a 5k park run, something like Hell and Back, or even a half-marathon. This gives you more of a reason to keep going, and also the satisfaction of working towards a set goal.

It’s been my dream for a long time to run a marathon and at the end of 2018 I decided that this would be the year. For the first time ever the tickets sold out before Christmas but thankfully they will be releasing more in July, and I’ll be up at the crack of dawn to get mine. This means 20,000 people are all also mental enough to want to run for 42.2km or 26 miles.

Despite waiting for a ticket on a wing and a prayer, I still have to train for it. But where exactly to begin? I’ll be embarking on a relatively rigorous training program from now until October. I’ll be trialing all the kit you need from sports bras to trainers as well as testing out the best apps and breathing techniques so you don’t have to. So book the run, lace up your trainers and start running!