Lianna Champ has decades of experience as a funeral director which she has channelled into her first book, she tells Sophie White how to grieve in a society which has lost its connection with death

Lianna Champ’s book, How To Grieve Like a Champ is divided into succinct chapters on everything from grieving the loss of a child to loss of a relationship. As she puts it there are no “wasted words”.

“A lot of grief books come from one person’s experience, which is very unique. My book gives advice and is very easy to digest. No matter what experience you’re grieving, you are taken out of the present moment and you do lose your concentration, sometimes something simple like reading can become quite challenging so I’ve written my book very much with that in mind.”

Champ has worked with people in grief for over thirty years, initially as a funeral director and more recently as a counsellor.

“From the age of nine my mother recalled me following her around and saying, “Mum! Mum! I want to be an undertaker. I’d never seen a dead body, I didn’t know anything about it, but I was a really empathetic child.”

Growing up in the 70s, the career options for a young woman did not really extend to undertaking. “My career guidance teacher said ‘you’ve more chance of becoming an astronaut!’ I was classed as a weirdo.”

When she was 15, her mother arranged a day of work in a local funeral home.

“‘I don’t think it’s a suitable profession for a young girl and I want you to put her off,’ she told them on the phone before dropping me off.”

“She dropped me off and I hadn’t really thought about the body, I think I was just really interested in helping people reconcile themselves with loss. But of course there was the body, but by the end of the day I was gowned up, masked up and helping them, stitching away.”

“When my mum collected me later, I nearly pulled the car door off with excitement. I said, ‘mum, it was so good and they said I could go back next week!'”

Breaking into the profession was a very difficult prospect, as a young women in the 80s few places wanted a female undertaker. Eventually, after working three jobs to pay her way during her training, Champ qualified and became the youngest female undertaker in England but it was difficult to secure a job. She was invited to one job interview: “I’d put L. Champ on my CV and when I got there, they said ‘but you’re a female, if we put a woman out there we’d go out of business overnight. I’m sorry you’ve wasted your time.”

The 20-year-old, Champ was devastated, “I cried on the train all the way home.”

Champ eventually started her own funeral home with some financial help from her parents. After the loss of two close friends in her late teens, Champ was more equipped than the average young woman to deal with the grief of her clients.

She had also coped with the dissolution of her parents relationship when she was 12. “It’s another type of loss, I was grieving for loss of security, loss of that happy family bubble.”

Seven years ago, Champ lost her mother and found herself adrift, unable to work through the grief.

“It was the most isolated period of my life. And I thought ‘crikey, if I don’t know where to go, what hope is there for anybody else?'”

Champ felt there was no guidance there for people suffering, grieving people can also be extremely hard on themselves, thinking others are coping much better.

“It’s so much easier if you’re not berating yourself, saying ‘I shouldn’t be like this’,” says Champ.

“When I look back, I was probably writing the book since I was 17! But I didn’t really think to write it all down.”

It took a random encounter with one of the dragons on Dragon’s Den, Australian investor, Richard Farleigh who said you must put all this experience and knowledge out there, to start on the book. Though this intervention by a celebrity businessman barely even registers as a random thing by Champ’s standards.

“I’ve had a really eventful life,” laughs Champ. “I’ll give you a pretty wild example.”

A friend’s father who happened to own Blackpool FC, happened to hear Champ sing one day and decided that he wanted her to write a new club song. Champ was bemused until she happened to be driving her car and noticed the name of a band on the radio’s digital display: Tangerine Dream. The song was about 45 seconds of cheering before music started up. Blackpool FC are known as the Tangerines because of the colour of their kit. Taking this as a sign, Champ emailed the band, who were German, after searching them on the internet.

“I said, ‘I’ve been asked to write a song, you came up in the car, I’ve never heard of ya – it’s just a long shot. But two days later I received a beautiful email from the band inviting me over to their recording studio for four days. So I went over and recorded a great song.”

“That was about seven years ago. That’s just one example, there’s always something exciting going on!”

“My mother always taught me, you have to be open and everybody has to serve society.” It’s a mantra that’s surely brought Champ to her latest enterprise, though really vocation is probably a more apt word for her approach to her work in grief.

“You cannot help someone with a funeral, without helping them heal. These people are literally in my care. When I talked about this with Richard Farliegh, I realised that I was bubbling with this and that it had to be done.”

“I think a lot of people are walking around quite broken, putting on a brave face for the world. It’s the way our culture is. We want to be seen to be having the perfect life – especially with social media. But the perfect life is how you feel inside. If you’re putting your self-worth on something that you have, then there’s something that’s not working within. It all stems from childhood.”

“Children are often told not to feel how they’re feeling. When children are crying, they’re crying for a reason. So there’s no point in giving them a biscuit because all you’re teaching them to do is when they’re feeling sad or bad, is to reach for the biscuit tin or medicate with a substance which creates a vicious circle.”

“Before, say in Victorian times, they had open displays of grief. It was only going into the industrial revolution that things changed. The Victorians started saving for their children’s funerals from when they were born. Death was a more accepted part of life back then. It was then with things like the NHS, that death was taken away from the home and the community and it was institutionalised. As a community, there was always the lady in the street who would wash the body, the local joiner would bring the coffin and life stopped and the community dealt with it together.”

“Then people started dying in hospitals, which changed the shift of it and we became unfamiliar with death and it became fragmented. I think emotionally people are very lost. I am devastated when I read that young children are requiring counselling now. The hardest chapter in my book to write was the one about helping children to grieve. It made me realise that I need to write more because I’m not just telling people how to bring children to funerals but actually how to bring them up!”

“If you can accept your losses and actually begin to enjoy memories of things shared, it can be really lovely. I have some beautiful memories of mum, I feel really close to her now and I allow myself to enjoy thinking of her.”

“I try to allow people to express themselves without comparison or judgment. Sometimes it’s just a matter of verbalising how they’re feeling. You don’t need to hear about other people’s loses, in bringing up their loses sometimes it minimises what you’re feeling. Sometimes you just need a oneway conversation when your grieving.”

How To Grieve Like A Champ by Lianna Champ is available to pre-order here. 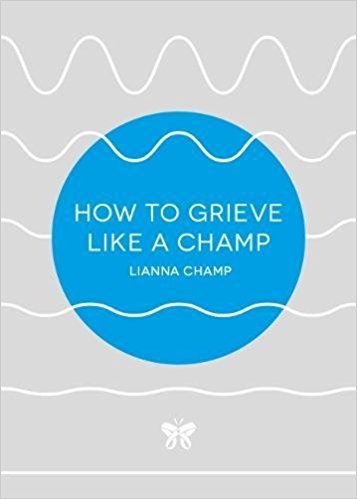 Self-care Diaries: Erika Fox, the influencer using all her good facemasks in lockdown

‘I knew how to be the life of the party, to make others feel special. So I did that. For years’: The dark side of people-pleasing