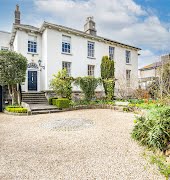 Here’s why we should be confused over Ivanka at G20

Video  footage of Ivanka Trump at the G20 Summit has sparked plenty of reaction online. Not all of it makes for comfortable viewing.

A video has been doing the rounds online of Ivanka Trump at the G20 summit. It shows her joining, or attempting to join, conversations with some of the biggest world leaders, Theresa May and Emmanuel Macron among them.

The footage, shared by the French government, has sparked differing opinions online as to whether it was appropriate for her to be attending the summit at all. The exchange shown is awkward as the politicians in the circle appear amused at her interjection and continue their conversation without responding.

Online the conversations surrounding the video are either amused or outraged. Rather than feel either, instead I found it quite an uncomfortable watch. To be clear, I don’t feel sorry for her, as I, like many others,  firmly believe she shouldn’t be there.

Despite that, watching her be snubbed by senior politicians did feel like something straight out of the school playground and not from a political meeting.

But should Ivanka be there?

The G20 Summit brings together leaders from all G20 member states once a year. It is a chance for them to speak face to face about world issues, be they economic or financial. Given that this is such a vital opportunity for them to discuss problems of a broad scale, it seems wrong to have an unelected individual participating.

Ivanka was there to speak at a specific event on female empowerment. During this session it was reported there were (unsurprisingly) audible groans from the audience at certain points, specifically when praising her father. However, it seems her presence was felt throughout the summit, even in situations where perhaps it was not her place to weigh in on global issues.

It is important to remember that although Trump has appointed Ivanka as an Advisor to the President, she is not an elected representative of the United States. Seeing her representing her country amongst other world leaders makes us question how nepotism seems to be trumping (sorry) democracy for the “leader of the free world”.

We’ve had our own experience of nepotism in Ireland’s politics and it never really works out best for the people.

The US politician, activist and wonder woman Alexandria Ocasio-Cortez was quick to speak out about Ivanka’s attendance. Note she did not ridicule her, but merely stated that she is not an elected official.

It may be shocking to some, but being someone’s daughter actually isn’t a career qualification.

It hurts our diplomatic standing when the President phones it in & the world moves on.

The US needs our President working the G20. Bringing a qualified diplomat couldn’t hurt either. https://twitter.com/parhamghobadi/status/1145074623035449357

As Alexandria is such an outspoken congresswoman herself (and also the youngest) it was no surprise she had an opinion to express. Many were quick to fire back asking if she was herself jealous that she was not in attendance.

As many other Twitter users pointed out, Alexandria would have been far better equipped for the situation as she is a member of government herself.

Perhaps the most frustrating response to Alexandria’s post was from Piers Morgan who stated: “Could be worse…Ivanka could have been a bar-tender 18 months ago”.

Morgan’s assumption that Alexandria isn’t qualified for her role because she worked in a bar 18 months previously is astounding. This presumption that working in hospitality would somehow make her less able to serve in her new position, is exactly the old ‘boys club’ culture politics needs to shun.

As almost half of British politicians went to private school, we need more political leaders from varying backgrounds.

The only reason Ivanka is in that room with other world leaders is because of who her father is. She is not qualified or experienced politically to be entering these conversations or circles and this is the crux of the outrage.

Not to pit woman against woman, and in the interest of fairness, Ivanka too has a qualification in economics. But the key difference here is that Cortez was voted into her position as well as having the college credentials to back it up.

And the idea that because you worked in bar means you have less to offer in a political role? We loved her calm and reasoned reply: “Actually, that would make government better – not worse. Imagine if more people in power spent years of their lives actually working for a living. We’d probably have healthcare and living wages by now”. 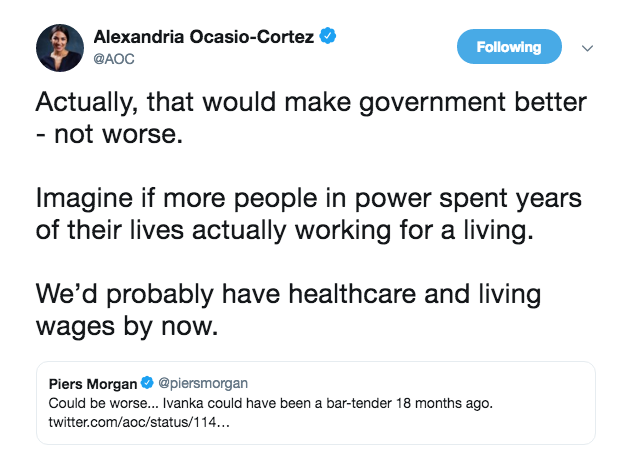 To top it off, Ivanka Trump certainly has not had an ordinary upbringing, instead being part of an extremely wealthy family. It doesn’t mean her intentions aren’t good but someone like Alexandria  cannot be belittled for having a more humble (and to be quite honest, normal) start to her career.

There are lots of rumours that perhaps Ivanka will run for office herself at some point, with some saying she is looking at 2024. This isn’t that unlikely given that there are ‘political families’ in the US, with many members running for office. For example, both George HW Bush and his son George W Bush were both presidents.

With presidential ambition in mind, perhaps behaving as a diplomat and immersing herself in the G20 Summit was an entry point for the public to see her as a politician. Only time will tell.

On a lighter note, given that she clearly looked out of her depth in this particular situation, the internet has delighted in photoshopping her into other political meetings throughout history.

Follow the #unwantedIvanka hashtag and enjoy. Here are  some of our favourites:

Late to the #UnwantedIvanka game but here you go. pic.twitter.com/mVNTKaVBMy