A dad who lost his three children earlier this year has reached out for help during isolation.

Now, he is asking the public for help as he isolates at his home in Newcastle, Co. Dublin. In a tweet today, the heartbroken dad admitted he was ‘struggling’.

Can you write to me?

“I’m looking for a favour. I’m struggling with isolation like you all but really missing the company. I was also enjoying most of the letters that I received so I have a request. Can you write to me? If you feel like using one of your An Post postcards then great. Letters welcome. 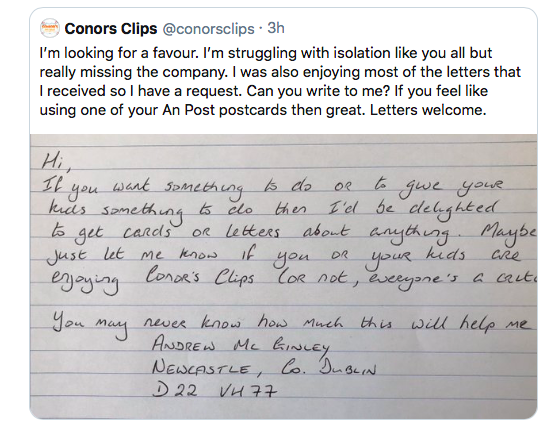 In a moving eulogy at their funerals, Mr McGinley spoke movingly about his children.

“Many of you will never know, until now, how much your everyday actions helped make my children’s lives more wonderful and helped us to allow Conor, Darragh and Carla to grow as the creative, funny and unique kids that they are and that it’s not just here in Newcastle, Saggart and Rathcoole, in Dublin or Donegal but sometimes even globally.

McGinley also spoke about what he wished for their future.

“I have promises that I have to keep and this will drive me on. Conor announced at Christmas that he wanted to set up a YouTube channel. Containing what he never quite committed to but I promised to help him and I will do that for him.

‘I promised Darragh that I would coach at Rathcoole Boys so apologies to the club, you may never get me out of there from now on.

“And I promised Carla a snowman, the place will be filled with snowmen every time it snows.

‘We, as a family, are heartbroken. It will only be with your help, support and friendship that we will be able to patch our hearts together in some way but we will still be forever heartbroken.”

True to his word, Conors Clips is now a dedicated YouTube channel Conor’s clips YouTube channel in memory of his son with various clips of the children in happier times.

Mr. McGinley has also launched a website dedicated to the channel and other social media channels as well.

We wish him all the best at this difficult time and hope all letters can help to show that support he needs to patch up his broken heart.

Image via An Garda Siochana