Golden Globes: The winners and highlights from the 2019 ceremony

There were some surprises at the 2019 Golden Globes, refreshing for an awards ceremony that, until last year and the #MeToo shake up always tended to play it safe when choosing the nominees and winners.

Related: Golden Globes 2019: The best of the red carpet

The critically acclaimed and box office smash A Star is Born seemed a sure winner but it was a shock to many to see Freddie Mercury biopic (which was, in comparison largely panned by critics) Bohemian Rhapsody and the fact-based comedy Green Book win major film awards. The latter, “inspired” by the true friendship of Tony Vallelonga, an Italian-American chauffeur/bodyguard from the Bronx, and Don Shirley, the coloured pianist Vallelonga is hired to drive and protect on a concert tour through the deep South in 1962, won for Best Screenplay and Best Supporting actor, yet caused controversy when Don Shirley family have said the film badly represents him.

Rami Malek, whose inspired performance as Mercury was easily the best thing about the film makes him a worthy winner, yet as the Oscars race heats up, the Hollywood Foreign Press Association’s decision to honour Bohemian Rhapsody (it also won Best Film) with the evening’s top honours is sure to earn derision; as with Green Book, the film was accused by audiences and critics alike of handling subjects such as race and in Rhapsody‘s case, sexuality, in a regressive manner. Before he was fired during production, Rhapsody was partially directed by Bryan Singer, who has been accused of sexual assault, yet it was noted that any reference to Singer was omitted from the acceptance speeches.

Lady Gaga deservedly won Best Song for ‘Shallow’ and the brilliant Olivia Colman rightfully won Best Actress in a Musical or Comedy for her take as Queen Anne in The Favourite. Her speech was also easily one of the most genuine moments.

Glenn Close was also a surprise winner for Best Actress in a Drama for The Wife (it was thought that Lady Gaga would take the win) and her speech was rousing and emotional. She spoke of women, always thought of in traditional roles, needing to find personal fulfillment outside of what they achieve in the home or in a marriage, referencing her mother who gave so much of herself to her husband without looking out for herself.

We have to follow our dreams. We have to say ‘I can do that’ and ‘I should be allowed to do that’

Sandra Oh made a great comedic partner for Andy Samberg, and after handling their opening monologue with aplomb, the pair mostly stepped out of the way, while Oh made Golden Globes history being the first woman of Asian descent (she is Korean-Canadian) to host a major entertainment awards show in the US as well as a performance for her role in Killing Eve. This makes her the first woman of Asian descent to win multiple Golden Globes, and the first in 39 years to win the Globe for best actress in a TV drama. 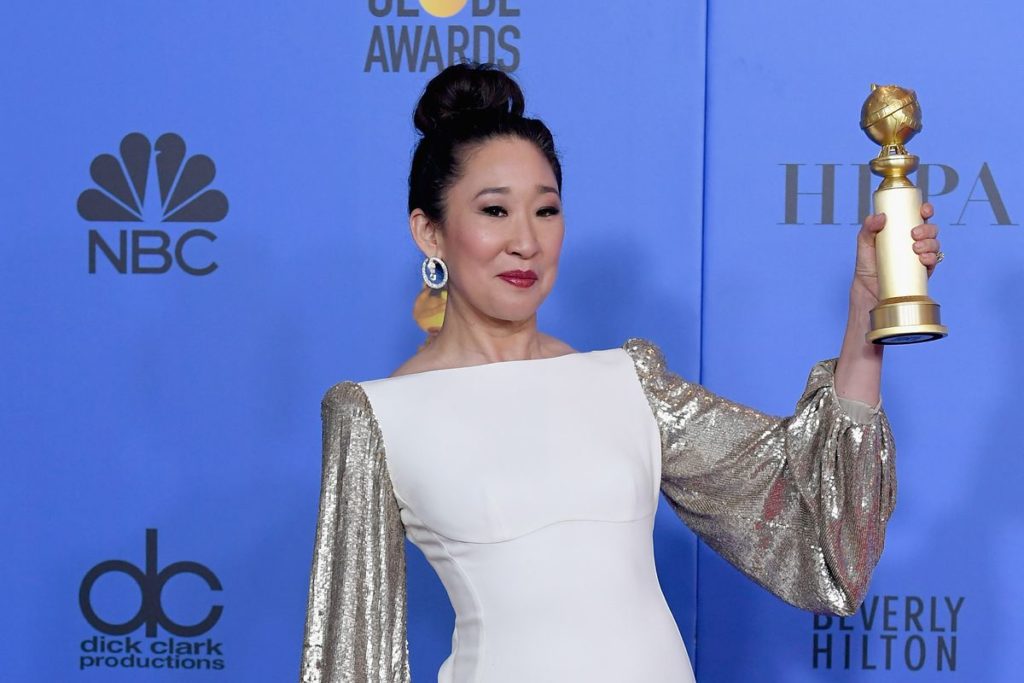 The surprise wins means there’s still a lot to play for as the Oscars are announced, but for now, here’s the main list of winners:

.@ReginaKing used her #GoldenGlobes? ?acceptance speech to announce that she will be hiring 50% women in her producing projects, and challenges other companies to do the same. pic.twitter.com/zMcx6e2pKq

You can watch highlights from the 2019 Golden Globes tonight, Monday, January 7th on RTE2 at 9pm

Chrissy Teigen is the queen of oversharing. Usually it’s in good humour, self-deprecating and irreverent. She doesn’t take herself too...