Golden Globes 2019: Everything you need to know

Awards season is officially kicking off tonight with the 76th Golden Globes to be held in the early hours of Monday Morning.

The Golden Globes 2018 set a new tone, as the industry responded to the Harvey Weinstein scandal that erupted in the media at the end of 2017. Actresses arrived in all-black gowns – a symbol of solidarity and allegiance to the Time’s Up movement and throughout the night, attendees made it known that it was no longer okay to talk about “who are you wearing?” – often the only question adressed to the female nominees before protest saw this changed – but to address much deeper issues and honour victims of sexual assault and abuse.

What can we expect this year?

The first major change to the 2019 ceremony is the presenting duties. Usually helmed by a white male, the Hollywood Foreign Press is diversifying by having Killing Eve and Grey’s Anatomy actress Sandra Oh as the official host for the Golden Globes 2019 Awards alongside Brooklyn Nine-Nine comedian Andy Samberg. The duo, who jointly presented an award at the 2018 Golden Globes, will join together again for the 2019 proceedings. 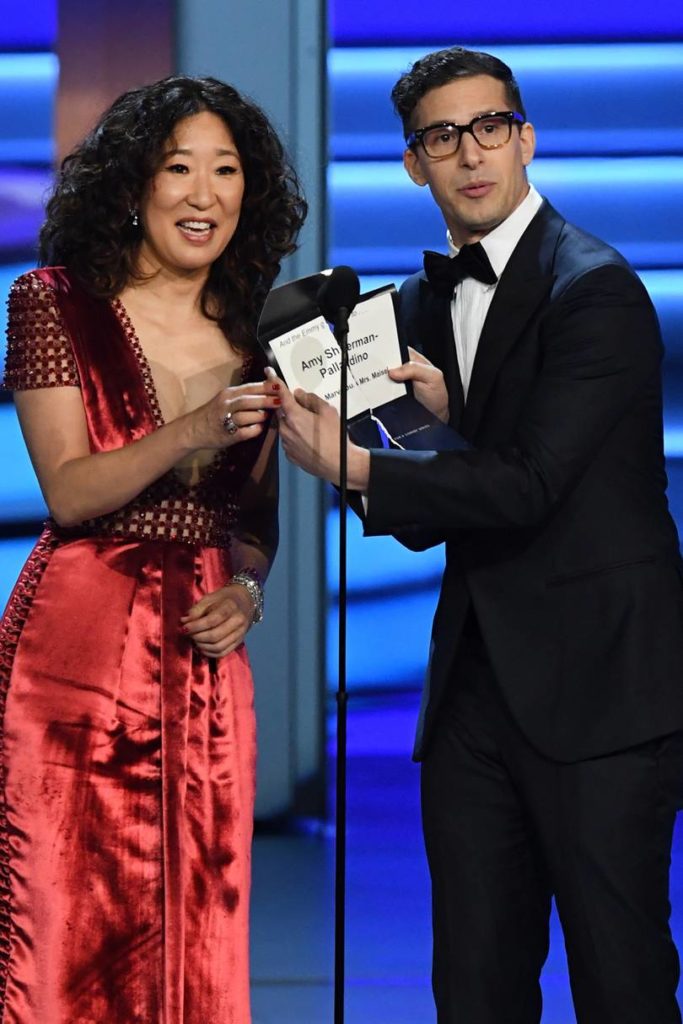 The nominees have been announced  and Monaghan actress Caitriona Balfe has received a Golden Globes nomination for the fourth year in a row, while Yorgos Lanthimos’s The Favourite, an Irish production from Element Pictures, has secured five nominations for the 2019 Golden Globes. Balfe is a Globes regular at this stage with a fourth nomination as best actress in a television series, for her turn in the popular time-travelling adventure Outlander – a series that has a massive fan base across the pond in particular.

Irish actress Saoirse Ronan missed out on a nomination for her performance in Mary Queen of Scots – a role she signed up for when she was just 16 – but will present following her win last year.

Highlights of the 2018 ceremony

Natalie Portman addressed the all-male list of candidates in the Best Director category. And Oprah Winfrey received a standing ovation following a powerful speech on gender inequality and the future for the young female generation.  “I want all the girls watching here, now, to know that a new day is on the horizon,” she said. “And when that new day finally dawns, it will be because of a lot of magnificent women, many of whom are right here in this room tonight, and some pretty phenomenal men, fighting hard to make sure that they become the leaders who take us to the time when nobody ever has to say ‘Me too’ again.”

Best Actress winner Frances McDormand took home the Golden Globe on Sunday night for her role in Three Billboards Outside Ebbing, Missouri, and mixed humour with a political rallying cry during her acceptance speech. “So many of you know I keep my politics private but it was really great to be in this room tonight. And to be part of the tectonic movement in our industry’s power structure. Trust me. The women in this room tonight are not here for the food. We are here for the work.” Sterling K Brown became the first black actor to win Best Actor in a Television Series in the drama category for his role in This Is Us and of, course Saoirse Ronan took home her first Golden Globe for her critically acclaimed performance in Greta Gerwig’s Ladybird.

In short, the atmosphere of the evening was distinctly unique to all other Golden Globes Awards that had preceded it since its inception in 1944. Let’s hope this year’s ceremony continues that trend and highlights the amazing period of change we have seen start to happen over the last year and mixes the glamour of an awards night with the continuing rallying we need to see from those on a public platform.

Keep an eye on IMAGE.ie’s Twitter account for the red carpet highlights from 11pm Sunday and be sure to check IMAGE.ie on Monday morning for all the galleries, winners and highlights from the ceremony.