Glamour in the face of crisis: why this iconic Sarajevo woman feels relevant right now

Meliha Varesanovic was captured walking proudly past the Serb gunmen on her way to work during the Siege of Sarajevo in 1995 in an iconic photo. Here’s why we can’t stop thinking about her defiant glamour in the face of dark times.

Living through these unprecedented times, sometimes it’s hard to know how best to approach each day. And while we can’t say there’s one attitude that will suit us all, or even one of us all the time, we can’t help but feel inspired by this image of a defiant woman staring down the face of a horrible situation.

Bosnian woman Meliha Varesanovic walks proudly and defiantly to work during the Siege of Sarajevo in the photograph taken in 1995 by British photographer Tom Stoddart. The siege lasted just shy of four years, the longest siege of a capital city in modern warfare.

When Bosnia and Herzegovina declared independence from Yugoslavia after the 1992 Bosnian independence referendum, Bosnian Serbs who wished to create a new state with a Bosniak majority encircled Sarajevo, attacking it with artillery, tanks and small arms. A total of 13,952 people, including 5,434 citizens were killed in the siege. 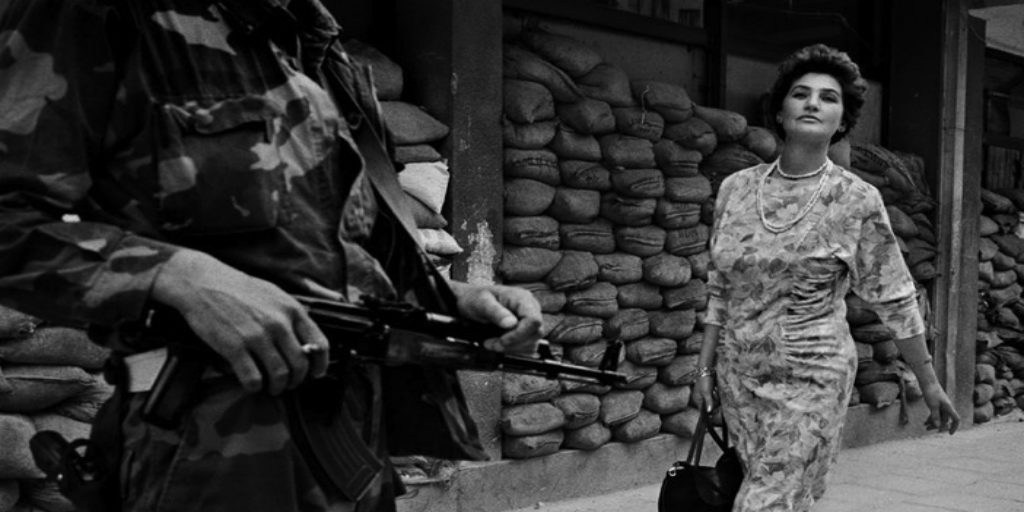 Amist this fear and chaos, Meliha Varesanovic walked to work with her head held high, wearing her heels and jewellery, and without a hair out of place. She was later interviewed, saying: “I did not know I was photographed at all. I was passing this way because I went to work in the Novo Sarajevo municipality… As for the dressing, I always tried to be neat and nicely dressed. Spite and defiance were added to that walk, and pride. It was my way to banish fear.”

There’s something undeniably inspiring about her commitment to carrying on as best she could in a terrible situation. While we are living through a pandemic, not a war, there are certainly similarities: our daily lives are restricted, and we live in fear for our loved ones.

“Spite and defiance were added to that walk, and pride. It was my way to banish fear.”

Getting dressed when there are so many other things to worry about, and with very little chance of anyone actually seeing what we’re wearing, can leave us thinking ‘what’s the point?’ and reverting to our baggiest sweats, if we even change out of pyjamas at all. And while there is absolutely nothing wrong with this, we’re all doing whatever makes us feel best during these strangest of times (full disclosure: I am writing this in pyjamas), there is a certain power in putting on an outfit, or even just some make-up, or jewellery, that makes you feel amazing.

As someone who thinks leggings and a huge jumper is an acceptable outfit, pandemic or not, this was obviously my WFH outfit for at least the first two weeks of social distancing. But I started eyeing up the other things in my wardrobe, and one morning put on a green jumpsuit instead. Now I can’t say it cured any of the existential panic that has made a little camp for itself in the back of my brain, but my day definitely felt more normal.

Like, maybe I could go out and meet a friend for lunch, or go for a wander around a bookshop and then get a coffee. I obviously didn’t do any of those things (stay home, folks) but wearing something that suggested my old reality rather than my new one served to make those things feel a little less far away.

When I decamped to my parents’ house in the countryside as restrictions started to be announced a few weeks ago, I didn’t bring a single item of make-up with me. What on earth would I need it for? I wasn’t going to see anyone apart from my parents, dogs, and a few people in our small village. But I wish I had now, just to have the option to put it on and feel a little more put-together, a little more normal, a little more Meliha, really.

I won’t be donning a dress and heels every day, but she’s reminded me that in times like these, there’s a defiance in getting dressed up.

Read more: 20 of the best throw-on dresses from the high street now

Read more: Vestiaire Collective are hosting a charity sale to fight Covid-19 (and there are some big names involved)