Céilís, kissing & wet suits: Every experience you ever had at Irish college

Ahhh, Irish college; “An Gaeltacht”. A term synonymous with both a place and a point in time; a veritable right of passage for the youth of Ireland.

This place (and time) was where “boggers” and “poshows” cohabited harmoniously; where relationships blossomed and hearts broke, and each night finished with a cup of tea and a slice of toast, as housemates dissected the day’s events in meticulous detail.

Or at least, that’s how it went back in my day.

If you spent part of your summer learning Irish* in a Gaeltacht between the years 2000-2010, then the below descriptions will most likely rustle up some serious nostalgia for your squandered youth, and the innocence and simplicity that it encapsulated. So sit back, relax and enjoy this trip down memory lane.

*Note: while officially true, anyone who’s ever gone to the Gaeltacht will know that the main things they really learnt centred around kissing, and interacting with the opposite sex in general. Improving one’s Irish was just the sideshow.

Regardless of the Irish college you went to you’ll find that your experiences were largely the same. There were the first relationships (swiftly followed by the first breakup); the nice Bean an Tí’s (who’d let you use your mobile phones in the evening, or watch the finale of Big Brother in their sitting room), and the not-so-nice Bean an Tí’s (who reported you for speaking English); the outdoor sports; the céilís; the hefty dinners, and the infamous discós. And there were the suitcases full of jeans, hoodies, sweets, chocolates, and one never-to-be-used Irish dictionary. All the basics.

The Gaeltacht isn’t for everyone. I distinctly remember some less-spirited Gaeilgeoirs moping around, pleading to be allowed to return home, to be freed from the shackles of their Irish heritage. I personally could not understand that kind of thinking – this was the largest amount of independence I had ever experienced (which isn’t a huge amount, considering how intensely chaperoned we were for the duration of the course), and I loved it.

Anyone who went to Irish college will remember those consistently damp, always cold, and forever-stinky wetsuits that we had to wear for each activity that took place within a 100m radius of any water source. Rumours were always flying around that if you urinated in the suit it would turn bright purple. This theory was never proven, and I certainly wasn’t going to be the one to challenge it.

It was in wetsuits that I think I first became body conscious; noticing the difference between the “early developers” and the rest of us, who gawked at those curvaceous figures and compared them with our own bee-sting bosoms and bean-pole waists. I remember wishing so badly that I could parade around even the slightest hint of boob-action under my skin tight suit, but alas, it wasn’t to be.

No Irish college experience would be complete without the outdoor activities. These took place rain or shine. The sky could literally have been pelting down fiery balls of molten lava and the ceannairí would probably still chuckle: “Ah sure it’ll dry up soon enough, out ye get lads!”.  The result was that many Gaeltacht surfing expeditions were less surfin’ USA and more ah ah ah ah, stayin’ alive, stayin’ alive.

Still, these were activities that bonded us; where short-lived romances and long-lived friendships began. It’s amazing the sense of solidarity that can come about when you’re forced to huddle together with your fellow spotty, shivering striplings, united in a newfound hatred for the great outdoors.

“TÁ TÚ AG DUL ISTEACH SA LEABHAIR BEARLA”. If ever eight words were going to bring about the fear of God in a fourteen-year-old, it was those. All it took was a few moments of reckless English-speaking within earshot of a person of authority to get you put into Ireland’s answer to “The Chokey”. Three strikes and you’re out was the usual protocol. The disgrace and scandal that surrounded a student who exceeded this limit and got sent home were similar to the likes you’d see a modern day blogger go through after they’d been caught carrying out extreme photo editing on their selfies. 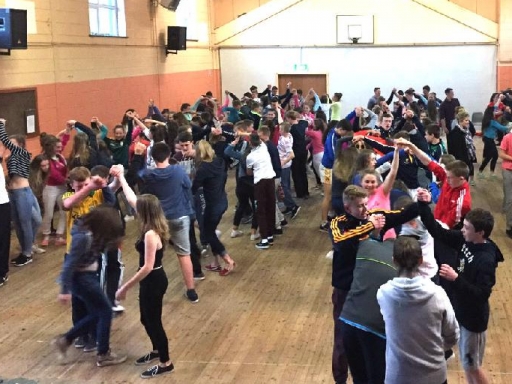 The fear of the level of sweat on your hands when you found yourself about to hold your crush’s hand for the Walls of Limerick. The disappointment when he/ she spent the night dancing with someone else. The heat that the room generated from all the hippity-hopping that was done.

And what about the dress up nights; especially the night when girls were to dress up as boys and boys as girls? I wonder if that’s even still a thing … Probably not, for obvious reasons. Probably for the better, too – the delight those boys got flashing us when the teachers weren’t looking was not reciprocated.

And then came the Saturday night disco, the big event. The moment we’d all been waiting for since Monday. Cue the awkward dance moves to DJ Sammy, the lines of smooching teenagers, the principal acting as DJ and leaving his “decks” every now and then to pull apart two individuals who were getting a bit too touchy for his liking. Ahh, but how happy we were – despite our raging hormones and volcanic skin complexions, we were so incredibly, blissfully happy.

Do you remember your entire student body being shipped off to mass every Saturday evening? These courses were in no way religiously-affiliated, and yet the powers-that-be insisted on the entire college attending Catholic mass once a week. At the end of the day though, the joke was on them because the mass usually took place on a Saturday evening, just before the weekly discó.

This meant that zero praying was done, as students used the time to “scope out the talent” and whisper about who was looking particularly good (in anticipation for the smooching that was surely going to come that night). If I recall correctly, the queue to receive communion became a veritable catwalk.

And then there were the Sunday afternoons when the parents were allowed to come and visit poor little Oisín or Síofra or Nuala, making sure they had not withered to a shell of a human in their absence.

This always provided a good opportunity for cheeky friends to rat out their comrade’s romantic escapades, shouting “Hey Mrs O’Brien! Paulo shifted a very nice cailín last night!”, to a puzzled Mrs O’Brien, who was sure Paul(o) was still far too young to be getting involved with that sort of thing yet.

And let’s not forget the food. I wonder what the poor Bean an Tí’s have to put up with now, in this age of gluten-free, sugar-free, vegan and paleo.

Back in my day, it was toast and tea for breakfast, maybe a bowl of cornflakes if you were “feeling healthy”. The tuck shop was open all day, you got a wrapped sandwich for lunch, and then with the evenings came steaming plates of chips and chicken burgers; mushy peas and mashed potato (dished out in those spoons meant for dispensing ice cream). In the Gaeltacht, every day calls for a Sunday roast, complete with a hearty dessert of some sort of cake and ice cream or crumble and custard.

Looking back one thing becomes clear, the “recommended daily allowance” of salt, sugar and fat had either not been established, or was not being enforced.

There were the ceannairí, generally a bunch of good-natured, wholesome young Gaeilgeoirs. I remember one warning me about the horrors of using an eyelash curler to make them longer. She shared a horrific story about the time she forgot to release the clamp when she pulled her hand away, only to pull every last eyelash off with it. That was Eilish though, and we tended to take anything said with a pinch of salt.

The main topic of conversation for every house meal revolved around who fancied who, with cryptic nicknames being thrown around such as “baggy shorts guy” and “balding Brian”. As the days went on, excited whispers detailed the kiss-capades that had taken place. Before long these boys would become the iconic “Gaeltacht boyfriend”, and as swiftly as the poor lad had gained the title, he’d lose it, only to be replaced by another equally replaceable counterpart.

I remember acquiring my own first Gaeltacht boyfriend, he was called Daithí. The relationship was perfect in the beginning, but after four days I felt things were getting “too intense” and decided it would be better if we left it as friends. Whilst difficult at first, we both got over the break-up soon after; Daithí found a new girlfriend two days later, while I chose to be mature with my recovery period, leaving it a thoughtful three days later until I kissed a lanky Tipperary boy behind a rock.

Christmas memories: ‘I’m on a swimming horse. If you cut me open like a stick of rock, you would find this moment carved within me’