UPDATE: Since posting this article (and a positive review of the new Ghostbusters movie) we have received hate mail.

People actually took the time to seek us out on our personal accounts and put their nasty little thoughts into messages. Privately, of course, with the foulest of language we will spare you from, and through dummy accounts?- because they have serious balls. 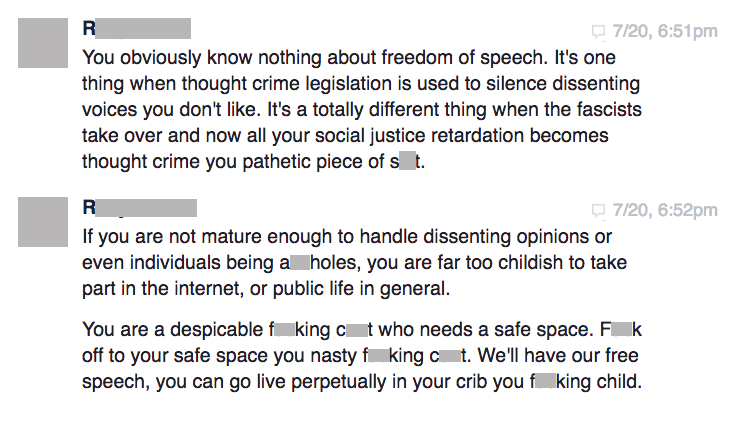 There were others as well but we don’t have all day to redact curse words, there’s sh*t to be done.

But the most ironic thing is that the main purpose was, to put it very nicely, to tell us to stop talking. About freedom of speech. And Ghostbusters. This is a remake of a 1980s movie that starred a giant marshmallow as the villain.

And they’re still missing the point. You’re absolutely entitled to feel how you like about Ghostbusters – we saw it, I was a little underwhelmed and Jen really enjoyed it. THAT is freedom of speech, and it also permits these trolls to their heinous, bigoted opinions. But personally attacking an individual, whether physically, verbally or online, is just straight-up bullying, shoddily masked behind ideas of political freedoms twisted to suit their own agenda.

And telling me to ?go live perpetually in your crib you f*cking child? (self-censoring there, they didn’t bleep themselves) because you don’t like what I have to say about free speech? That, my friend, makes you an oxyMORON.

Freedom of speech. It’s something we most commonly hear of in American movies and they’re particularly fond of the phrase, given that it’s written into their constitution. It also considered slaves less than human, severely limited the rights of women and continues to raise international eyebrows for its “right to bear arms”, but hey, that’s not the road we’re going down today.

Essentially freedom of speech was designed to protect people from censorship and allow the spread of ideas and opinions without fear of retaliation. It’s one of the founding ideologies of modern democracy, that we can peacefully disagree, debate and learn from one another.

But what happens when that freedom is used to protect hate speech? It’s the’reason the likes of the Westboro Baptist Church can publicly spew homophobic slurs and Donald Trump is the Republican presidential nominee (*shiver*) rather than being held legally accountable for every offensive, untrue thing that has ever fallen out of his mouth. But again, I digress.

Twitter has often piped up with this phrase when accused of allowing users publish 140 characters of rancorous hostility. But it seems, finally, they’ve accepted the difference between free speech and hate speech. Leslie Jones took to Twitter during the week to call out all the racist trolls who have been targeting her new film and more specifically, her personally.

The film, praised by the critics but whose trailer has been the most down-voted video on Youtube thanks to a campaign of ‘bros’ who disliked the idea of?the 80s “classic” being remade with a female lineup. St Vincent put it best:

Saw Ghostbusters reboot and loved it. The bad press about it so blatantly sexist. Acting like they remade Citizen Kane with all gerbil cast.

But the hate, which Jones in particular has faced, has been extremely nasty; sending her vile images, setting up fake accounts of her, and comparing her to Harambe, the gorilla that was recently shot and killed after?a child fell into its enclosure.

Please help me find this fake Acct posting the most awful shit in my name. Help! pic.twitter.com/lp4RzVLb6f

@yennyjennyyen @matociquala are you joking? Let someone send your pic to you with semen on it and see how much grace you have. Wow

Understandably upset by the wave after wave of insults, threats and vitriol, she called on Twitter CEO, Jack Dorsey, to act on it. And surprisingly, they did. Twitter has banned Milo Yiannopoulos, a right-wing tech writer who has been notoriously controversial on the platform, having been suspended by Twitter on numerous occasions for his extremist tweets and trolling campaigns.

In tweets (that have all now since been removed and/or suspended)?Yiannopoulos called Jones “barely literate” and claimed she was “playing the victim” by retweeting all the abusive tweets directed at her, rather than ignoring them.

As the rallying point for some of the most horrific trolling tirades, Twitter made the call to ban him for life from the platform, releasing a statement that said ?People should be able to express diverse opinions and beliefs on Twitter. But no one deserves to be subjected to targeted abuse online,? and we couldn’t agree more. Bullying and abuse can take many shapes other than physical and can be equally as painful. Jones’ decision to leave the platform only goes to prove the hurt and distress words can inflict.

I leave Twitter tonight with tears and a very sad heart. All this cause I did a movie.You can hate the movie but the shit I got today…wrong

In response, Yiannopoulos claimed that it’s not his fault that his followers followed his lead and rhetoric and he should not be held accountable. His devotees have said the ban marks the death of free speech, starting a hashtag #FreeMilo.

The liberals are the true fascists. Banning free speech over & over again.#FreeMilo

What needs to be understood is that while abusers may distance themselves from the reality of the situation through their screens and anonymous accounts, it does not reduce the impact they have on the person they’re targeting. It’s about time social media shouldered some of the responsibility for online bullying and a directed hate campaign and continual personal harassment should not fall under the freedom of speech. If they cornered her in the street hurling the abuse they so bravely type on their keyboards, would people continue to claim that it’s acceptable?

If I shout racist abuse in a pub and upset people, landlord can throw me out. There are other places to drink. Twitter is a pub. #freemilo

It’s a bold step but we reckon Twitter have made a step forward, not backwards.