When I was younger, and I imagined what marriage would be like, my mind would settle on my parents? bed – a vast king size nest of blankets and pillows flanked on either side by contrasting his ?n? hers side tables each piled with objects that perfectly represented their individual tastes and preoccupations. Uncut magazine, orange peels and dark chocolate on his; Lanc’me cleanser, spectacles and pages for proofing on hers; and merging these separate and distinct limbs was this shared, intimate space.

Growing up an only child, I was alone quite frequently and my bedroom and my bed were particularly cherished retreats. Like many only children, I occasionally felt a little bit left out of my parents? particular intimacy. I was genuinely quite fascinated that they shared a bed; it seemed somehow a little eccentric to me that you would give up the greatest escape we have: our own bed. Of course, I eventually surrendered my precious sanctuary when I met my husband. We moved in together relatively quickly – two weeks after our first kiss – and the novelty of going to bed and having someone to talk to and reach across to in the ocean of night was unbelievably novel to me. We learned the bed dance that all couples perfect – the most banal of ballets: first this side, then that side, now you pull the duvet, now I throw a leg outside of the covers.

The next few years, I loved playing at this intimacy, feigning irritation that my habits of reading late and listening to the stereo while I slept were met with resistance from my bedmate. We travelled for several years and the different spaces we shared grew and shrank depending on where we were: long stretches living in a tiny tent were replaced with a phase of living in a marginally less tiny van; a bunk bed in my father-in-law’s dining room followed and then eventually a real life house. I always thought our ability to coexist in these tiny less-than-ideal homes was a testament to how well we fit, and so I never imagined a time when I would want to retreat from him back into my own seclusion, yet this is what has happened.

When my first baby was born, I slept in a little bed with my son in his room, but I fiercely missed my husband and was forever trying to slip back into our room. After my second son came along, I tried a different approach and asked my husband to sleep on the sofa in my office while I co-slept and fed the new baby. This time, however, I didn’t miss the shared bed, and at the end of six months, I decided that I would be moving into my office to continue my solo sleeping. And I confess that I am loving it. When friends learned of the new sleeping arrangements, the news was met with mixed reactions, from pity to envy, depending on what kind of life stage they were at. My single friends looked positively mournful on my behalf, while the other parents, perhaps slightly more jaded, looked wistful as I described putting the babies to bed and saying goodnight to the husband, closing the door to my office, and being alone. Escaping my marriage, basically.

The mixed reactions got me to wondering if the separate bedrooms situation was perhaps a bad thing for my marriage. My own mother seemed particularly concerned. I would say that we would fight an average amount for any couple navigating the early years of babydom, mortgagehood and career gymnastics. However, my mother seemed very uncertain about the set-up, presumably imagining those formal separate bed arrangements of the supposedly passionless 1950s couples. I argued that the distance would actually help our relationship if we were brave enough to give it a shot. Siri Hustvedt wrote in her 2003 novel What I Loved that, ?proximity is the enemy of romance? and six months after the birth of our second child, I had begun to feel that we had hit peak proximity. With two children under three, a solo trip to the toilet is practically considered an indulgence in my house. The indignity attendant to bringing new life into this world meant that I felt terribly, irretrievably exposed to my husband, and I think this really prompted my retreat. I wanted to give him time to un-know all the wretched secrets my body had spilled in childbirth. And I wasn’t ashamed by any means; I loved giving birth, but now, all I wanted was to withdraw and regroup.

For me, it is not just an arrangement born out of loud snoring and blanket-stealing; I think it is very much tied up in the transition from woman to wife and woman to mother. Drawing this isolation around myself is motivated by the need to reestablish my identity away from my family. I tried to call up some examples of couples successfully keeping their sleeping arrangements separate, and the results were mixed. Frida Kahlo and Diego Rivera kept separate houses side-by-side and linked by a small bridge.

The his ?n? hers homes – pink and white for him, and blue for her – definitely kept their famously tempestuous relationship passionate. One of her diary entries reads like a mantra: ?Diego = my husband / Diego = my friend / Diego = my mother / Diego = my father / Diego = my son / Diego = me / Diego = Universe.? However, their marriage was also not remotely monogamous, a trait we associate with a successful marriage. They both frequently had affairs, and apparently made little effort to keep these from one another. Though Frida and Diego were fiercely united, this was perhaps not the most consoling example of a couple succeeding in sleeping apart. 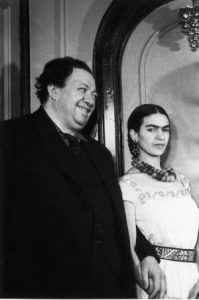 Relationships counsellor Mary O’Conor (DearMary.ie) was reassuring insofar as she seemed to think that separate beds is more common than we realise. ?I think it happens quite a lot for different reasons, but mostly to do with snoring, differing sleep patterns, getting up to tend to small children, or differing working hours.? O’Conor felt that as long as the couple were still being affectionate, then the intimacy of the relationship would not be damaged; though if the arrangement is long term, the couple needs to be even more aware of the needs of the relationship. ?It is imperative that they make dates for physical intimacy,? says O’Conor. ?This sounds very cold and calculating, but it works! A friend told me that when she met her husband, she was already divorced and used to sleeping on her own. She told him that she didn’t really think it would work with his stuff all over the bedroom and sleeping in her bed, and so she thought he should have a separate bedroom. His reply was wonderful (he is Russian): ?My darling, I come to you naked, and I leave you naked!?? I sense that as an Irish person, I lack the inherent suaveness to pull off this kind of comment – I feel that if I said this to my husband, he might think it was some kind of threat. However, O’Conor’s words made me realise that since moving out of our bedroom, I have been giving more thought to our relationship than ever. We kiss each other goodnight every night and say ?I love you?. Before, we might have been lying side-by-side, but really we were isolated – he absorbed in his phone and me plugged into an audiobook. Now we visit each other and talk and listen, which feels, to me, like a bigger act of intimacy. I may return to our bed some time – after all, marriage is long (hopefully), but for the time being, I’m enjoying my room of one’s own.