Fashion illustration is seeing a resurgence of late, due in no small part to David Downton, one of the most prolific artists of our time. His work combines art, style, elegance and emotion. In a world where Photoshopped fashion images often feel mass produced and out of reach, illustration offers warmth and approachability. Although classical in style, Downton has always retained a contemporary appeal, ensuring the endurance of his work over time. His illustrations chart both the backstage and front of house of the couture world and celebrity culture. His portfolio includes portraits of Erin O’Connor, Lily Cole, Linda Evangelista and Carmen Dell?Orefice. In advance of the launch of his new book, Portraits of the World’s Most Stylish Women, I was fortunate to meet the artist-in-residence of Claridge’s Hotel at Louise Kennedy’s atelier on Dublin’s Merrion Row. 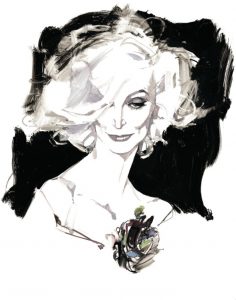 Who have been your favourite people to illustrate?

?Well, with some you develop close friendships. Erin O’Connor, Carmen Dell?Orefice, Dita Von Teese – those are people I work with a lot, but for me it’s a thrill. I just drew Gillian Anderson, I drew Ali MacGraw – they are all a thrill for me. I’m sort of in love with the person I’m drawing before I’ve met them. And it depends on what it’s about, what it’s for. I love drawing January Jones because I was a total Mad Men freak. Some people I never get to draw again – it’s just one of those circumstances – and some will slightly absorb into your life. But I have never had a bad experience.?

How did your relationship with Claridge’s come about?

?I was going to do my last book launch five years ago at Claridge’s with Paula Fitzherbert, who’s the PR, and it didn’t work out, but we kept in touch. She asked me to come and see her and we sat with Thomas Kochs, who was the general manager, then somebody – one of the three, I can’t now remember who – came up with the ?artist-in-residence?. Just three words, three little words. We didn’t know what it meant, but we knew it was great! And even now, every night I go out in London someone says, ?Oh, are you still there? What room are you in? What’s it like? Do you ring for breakfast?? There’s always a conversation going on about it. And it’s everything you imagine it.?

What’s special about Claridge’s for you?

?It’s the thing you can’t manufacture. I don’t think luxury is about the latest anything for me. It’s about the magic in the atmosphere, the walls, the things you can’t make happen because they didn’t happen. The stories of Claridge’s; the lobby, which shouldn’t work but does. You walk into the lobby and you feel good. And the staff – I know all of them because I’ve been there for years now. I can’t say it’s my second home, but it feels like home. Sounds ridiculous, doesn’t it? What a fantasy. The wonderful thing is I don’t have to fake anything about it, I don’t have to say something I don’t feel because I’ve been there long enough. If it hadn’t been the magic that it is, I guess we would have parted ways, one way or another. It’s about more than the drawing. This is an ongoing dance.? 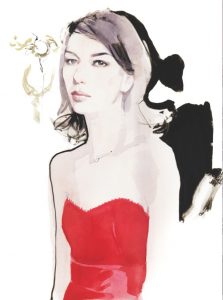 Do you think the women you have illustrated are aware of their own beauty?

?The ones that are in the book – people I met by choice and by design – of course they know. And looking after their image is taking care of business. They know as much as many of the photographers. Some of them are photographed every other day. There’s nobody I know that’s entirely confident all the time about how they look, however we view them. But equally they know that this is part of what they do. People in films have seen themselves from every angle – asleep, dead, walking through a wood from the back – We’re so unused to how we are, how we look, how we move. They know everything. They use it, it’s part of their job.? 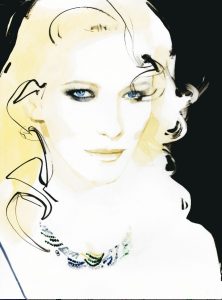 Are there differences in how somebody would sit for you versus posing for photographs?

Who have you not worked with that you would love to?

?Grace Jones. We’ve talked about it. It would be amazing. Tilda Swinton, Anjelica Huston – It’s always about character, about individuality, personality. Usually, they are older because those things come with time. Drawing the latest model – I leave that to photographers. Because that’s where they exist. For me, obviously, drawing Erin or Carmen at 85 – the most beautiful woman in any room, the most interesting, and the one everyone looks at, regardless of whoever else is there – This is about so much more than how they look. The look is only the opening gambit.? 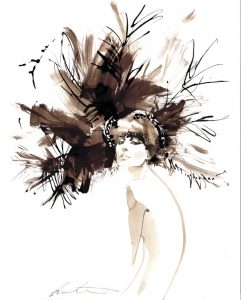 Your work has an enduring quality. What do you think is the key to your timeless appeal?

?I have no idea. I always think I’ve had my nine lives. I think partly that it doesn’t speak of the moment it’s done in. It sort of refers back, but it’s not pastiche. I’ve been working 20, 30 years; 20 in and around fashion. And by all logic, I shouldn’t still be doing it. Fashion is about the next thing. I think I was never a fad. I was never the one that was, you know, directional. I only ever worked in the way I knew how to work. I suppose from that I was never exactly in fashion and I never exactly went out. And I never wanted to be, because if that industry loves you, then they have to go cold on you. You can’t be an ongoing thing because, you know, it’s sustained by the new.

?Somebody once called it ?contemporary nostalgia?, which I loved. Because I don’t mean to look like a ?throwback?, but I also know that those influences come through with me. But I never thought I really had a style. I’m aware of my style now I see so many people doing it. It’s like someone doing an impression of you, or when you do an impression, you suddenly isolate it. I certainly didn’t plan it, and I never thought it would lead me to such extraordinary places and meetings. I feel privileged. I never ever take it for granted. I didn’t set out to do it. The thing I will give myself credit for is that I have a very, very good antenna for surrounding myself with great people. People can be very derogatory about fashion people, and yes, with reason in certain circumstances. But I’ve met the best people, the funniest, the most driven, the most exciting, the most beautiful, the most eccentric through this business. No question. And that is what I love, I love the meeting, the place it takes you to.?? 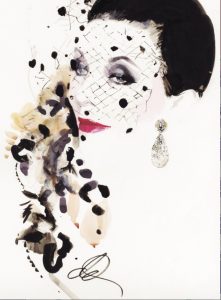 You are a keen Instagrammer – how does the app work for you?

?It has changed a lot of things. A lot of artists, photographers and so on almost use it as a portfolio, which I do understand because it’s very direct, but I actually don’t like putting my work there. I don’t like the way it looks. To be honest, I only did it because I had an intern who was so organised and made me do it. I felt guilty. I did it for him. I wasn’t very interested, but it’s been great. You have to be open to social media, and I certainly wasn’t because I didn’t feel you had to be. Most brands have a figurehead, most artists put themselves in the picture. The ones who don’t, you notice. It’s unusual now. And people always want more than you want to give. I try and manage that side to it, because it’s not natural to a lot of people. But it’s equally part of what you have to do. And I made the bargain with myself, I said, ?Ok, it’s not me anyway, it’s him, just let him do his thing?, and it’s fine, I don’t find it difficult now. I always regard it like an actor – it’s a character. I think he’s a role in a long running soap. It’s just a recurring role, in that sense. And that gave me great freedom once I thought of that, because I wouldn’t take it personally.?

When did you realise you had a unique illustrative style?

?I don’t think I did and I always say to students, don’t focus on style. It’s not really style, it’s how I see things and how I work. I’ve noticed a lot of students get very obsessed with whether or not they have or haven’t got a style, but I always think a style will find you. You know it’s really just your response. So it’s like I don’t think of it as a style, I think of it as how I see things. It’s like I haven’t got a lifestyle, I’ve got a life. Or a hairstyle, I’ve got hair. I understand because it categorises you slightly and people need to do that. When I began, I had influences. I was doing a little bit of this, a little bit of that, trying to figure it out on paper. But it happened. But you see, everything I’ve done has been very slow. I didn’t make it into the fashion world until I was 37. I was supposed to do the books five years before I did them. I didn’t do anything with social media until two years ago. But I look back now and know I shouldn’t have done any of it before I did it.?

?There are people who are programmed for success and you can see them – you can see it in their eyes. It’s talent and drive and this absolute conviction. And there are people that sort of go in the slow lane, or on the winding path, and have success in another way. And I was sort of successful in that I was paying my mortgage. That’s what I regarded as success. So in that sense, I was successful quite early. But in no other way did I feel it, and I don’t know what success is anyway. If my 20-year-old self could meet myself today, he’d say, ?No way is that happening to you. You’re not that person!??

?I am soon to launch an online store. I’m going to call it a department store. I’m having a stationery department, a book department. It’s a bit of fun, but I’m gonna sell sketchbooks and notebooks and cards and all those things.? 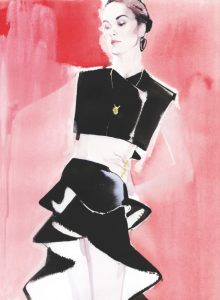