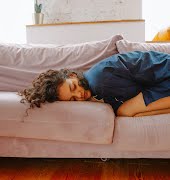 A beginner’s guide to: chatting-up complete strangers for a night

Welcome to the first edition of “A first time for everything”, the column in which Geraldine Carton hurtles herself out of her comfort zone on a weekly basis, and reports back on how she got on. What with this being its inaugural feature, it seemed only right that she would kick it off with something that felt supremely uncomfortable…

A bit about me; when it comes to dating, I have zero game. I am terrible at flirting. I rarely approach potential suitors, and the prospect of “smizing” (smiling seductively with your eyes) makes me cringe and squirm with awkwardness.

With this in mind, it was decided that a great first challenge for this article would be – yep, you guessed it – for me to spend an evening attempting to chat-up complete strangers.

(I wish I could say that my editor had made me do it, but the truth is that I was the one who suggested it.)

The challenge was carried out last weekend at the Vodafone Comedy Festival, and my friend Melanie reluctantly agreed to act as my wing woman, although she was more cringed by this entire idea than even I was.

I channelled Eminem for the entirety of this challenge. My palms were sweaty and my knees were weak; on the surface I might have looked calm and ready, but in truth – I was bricking it. I was so terrified that someone might take my light-hearted introduction badly; I imagined myself being escorted off the premises, my criminally terrible flirtatious banter being reported on the six o’clock news the following day…

Related: This is why wearing granny pants is an act of self-love

The first person I approached was a Brazilian man selling drinks from a cooler bag on his back. I nervously made my drinks order, and as he went to extract the mini bottle from his backpack contraption I added “Hey, by the way – do you know what material this is?”, pointing to the lapel of my denim jacket. He looked confused and responded with “Denim?”.

It took him a couple of seconds to register what I had just said, and he then let out a nervous chuckle. When I too laughed to show that I was not being serious and he didn’t need to worry about potentially having a stalker on his hands, he let out a sigh of relief and then a hearty laugh. 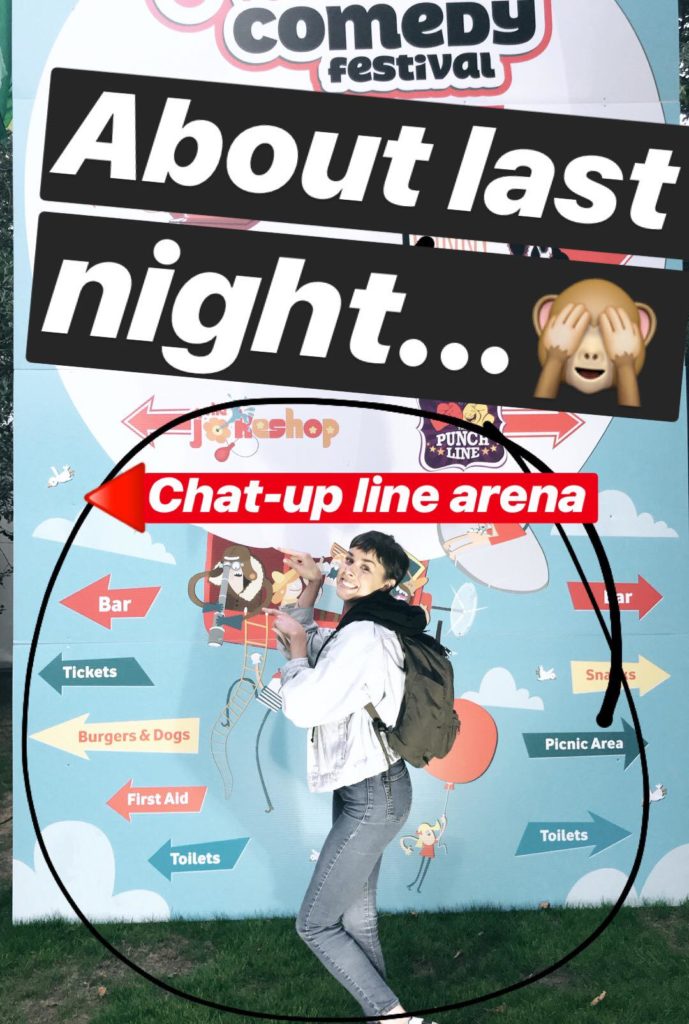 I made another two chat-up-line attempts that night.

I half-shouted “HEY ARE YOUR FROM TENNESSEE? BECAUSE YOU’RE THE ONLY TEN-I-SEE” to a man passing by on his way to the toilets. He smiled, but didn’t break his stride. I can’t say I could blame him.

The last guy I served up one of my cheesy chat-up lines to was a waiter enjoying a quiet cigarette break outside a nearby bar. Taking a deep breath, I sidled over to him and blurted “Hey, on a scale of one to America, how free are you tonight?!” whilst making The Fonz-style guns sign. The streets were very loud at this point, so he couldn’t hear me and I had to repeat the whole thing three times, guns and all. My commitment to the delivery of this statement succeeding in getting a laugh, and then he winked and told me to not give up my day job.

Little did he know that, technically, this was my day job.

Melanie and I called it quits at that point, I was tired of psyching myself up to approach strangers with these terrible chat-up lines, and Melanie was tired of having to bear witness to it all. We got ourselves some drinks and nabbed two seats at a nearby table, striking up a conversation with the couple sitting there as we sat down.

The couple, called Patrick and Karen, were full of craic and stories. When we told them about our evening of chat-up line attempts, they said if we wanted a real story to write about, then we should write about them.

The two enjoyed a short-lived teenage romance back when they were seventeen, and it wasn’t until 25 years later, upon getting a flyer through the post box advertising Patrick’s company, that Karen decided to get back in touch. The night we met them marked their one year anniversary and the couple say they’ve never been more in love.

Karen and Patrick’s story was a gorgeous one, and I wondered to myself, had we not spent the evening getting accustomed to talking to strangers, would we have heard it at all? It made me think, what other brilliant conversations have I missed out on, because of my reluctance to talk to strangers; because of an unwillingness to go outside my comfort zone?

Heads down, earphones on

We live in a world where people wait in queues with heads down and earphones on; where strangers chatting at a bus stop is a novelty instead of a norm. It seems that in welcoming technology into our lives, we’re closing ourselves off to the people around us. How can we complain about the difficulty we experience in finding love, when most of the time we’re totally unwilling to say hi to the person sitting next to us at the bar.

That night I realised that, in our aversion to potentially awkward, embarrassing situations, we deny ourselves all sorts of interactions with potentially wonderful individuals every day. By putting yourself “out there” in a few random instances, the fear of chatting to strangers will start to slide off. Give it a try and you’ll see.

As Yeats put it; “There are no strangers here; Only friends you haven’t yet met”.