A first look at ‘Dark Enchantment’, a fantasy novel launching this weekend at the Dublin Book Festival

First written in 1953, Dark Enchantment by Dorothy Macardle tells the story of 20-year-old Juliet Firth, who, after many unhappy years in the French Riviera, is elated at her recent move to the French Alps. But as rumours of dark happenings build, can Juliet escape once again? Read this extract before the novel’s launch at the Dublin Book Festival this weekend

The sawmill was quiet, and Henri, who was working alone with a plane in the shade, heard Michael’s whistle and looked up. With quick and precise gestures he signified that he would finish what he was doing in five minutes and would come along. Michael lit another cigarette and waited for him. At all times, Henri seemed ready to walk and talk. He was a man who read books, observed the stars, contemplated the habits of plants and creatures, had swarms of questions in his head and nobody to discuss them with. Michael found it a bit embarrassing, sometimes, to be regarded as a learned and travelled man with whom it was a privilege to converse. Actually, he enjoyed Henri’s companionship just as much as the lonely fellow liked his.

The morning was young and the sun had not yet dried up the moisture from last night’s rain; drops from weeds and branches spattered the two as they made their way round the knoll towards Terka’s camp

‘You do right to warn her,’ Henri said when he had been given an account of the meeting at Camille’s. ‘I agree that they are not likely to organise an attack on her now, unless she does something new to enrage them, but if a man were out with a gun, for example – and there is much scaring of birds just now – and saw Terka, I think he might be tempted to shoot.’

‘That is what I’m afraid of,’ Michael told him. ‘They seem to have interpreted whatever the curé said as a license to kill. They were barbarous, Henri. Why is it that people seem to change, as soon as they even speak about Terka, into something entirely unlike themselves?’

‘Fear of witchcraft almost bewitching them? … Yes,’ Michael went on slowly, ‘it is a case of fear of an unreal danger creating a real one. I suppose that is happening all the time. I suppose it causes wars.’ ‘Why do you say “unreal”?’ Henri broke in. ‘I ask myself if it is possible for men like you, Michael – Protestants, sceptics – to comprehend how terrifying the threat of witchcraft is? There is no way to combat it, no way to escape, no way to end it except by the witch’s death.’

Michael was astounded. This from Henri!

‘But you are not afraid of her!’ he exclaimed.

‘I do not wish, just now, to confront her. She will know that it was I who persuaded Agnès Granerol to confess to the curé.’ ‘She will know?’

Henri did not answer and Michael realised that argument would be useless and insistence unkind. At the brink of the clearing he paused and asked Henri to wait for him. ‘By the way,’ he said, smiling, ‘I’m to tell her that if she swears that she’ll leave this district immediately, Camille will sell her the mule.’

‘But,’ he exclaimed, ‘Camille must not do that!’

‘Why on earth not? It is surely the one sensible, practical thing. Without an animal, how can she move her gear?’

‘He would be disobeying the priest.’

‘I am certain Father Pascale would agree.’

‘It would be felt he was betraying his neighbours. They do not discriminate. They will take it, if Camille trades with her, so may they. It would spoil his good influence.’

It was really all very difficult, Michael thought. Wheels within wheels. What on earth was to be done? While he stood, perplexed, he saw Henri’s face light up with his childlike, innocent smile.

‘It does not matter what I do,’ Henri said. ‘I am outside – alone. It will be all right for me to sell her the animal – Camille has only to sell it to me. If you will negotiate?’

Michael’s outburst of laughter surprised him, but his own smile broadened. Michael clapped him on the shoulder, saying, ‘Okay! I’ll negotiate – you wily old casuist!’

He came alone to the clearing and looked down at the ugliest sight that had met his eyes since the War. The door of the hovel hung open; smoke and ash drifted from piles of charred rubbish – rags, pots and tins. The rabbits were very dead; not a living creature was to be seen; a stench of destruction hung in the air. His first thought was thankfulness that Juliet would not see this.

Joining him at his call, Henri went forward with him, appalled. On a rough gibbet, five rabbits hung strangled. The mule?cart was there, its shafts tilted up, and near it, a swarm of flies and bluebottles buzzed. The slab of stone they hovered over was red and the object that lay on it was a cock: a black cock without a head. When Henri saw that, he turned away, all the colour gone from his face.

They went into the cabin. It was no more than one room with a dirt floor. Beside the hearth of stones was an iron grill and in one corner a pile of straw and rags had evidently served as a bed. They saw a pestle and mortar but no tools. Twigs and bamboo?canes and a half?made basket lay on the floor; there were also a soldered kettle, a pair of broken boots and a piece of leather; a torn petticoat with a needle, threaded, stuck in it, and a ragged coat. A pitiful fight for existence had gone on here.

Curious odours permeated the cabin. They were accounted for by bunches of herbs that hung from the rafters. These, they took outside and examined. Michael recognised, besides wild mint and thyme, box and savory, myrtle and rosemary – common herbs of the Maquis, some harder to find – hyssop and fennel and Marjolaine. There were twigs of the bush spurge which, Henri told him, were sometimes thrown into the water to stupefy fish. There were others that he did not know.

‘Are any of them poisonous?’ he asked Henri, who seemed to have identified all of them and was separating them into piles.

‘And I wonder’, Michael remarked grimly, ‘what she wanted it for.’ He had regarded Terka at first as a harmless and persecuted pauper; then as a gypsy charlatan, driven to making a living in mischievous ways. Now – he began to wonder whether he had not been very obtuse.

Henri said: ‘Whatever she used these for, they are better burnt.’ In the centre of the clearing, they piled some twigs, flung the herbs on them and set them ablaze. Henri threw the dead rabbits and cock on the fire and, to the aromatic smoke from the herbs, was added the smell of burning flesh. Sickened, they turned away from the polluted place.

‘I suppose’, Michael said after a while, ‘all that was meant to impress her enemies. The rabbits and cock were a warning, no doubt.’ ‘They were animal sacrifices,’ Henri said. He was still looking pallid and shocked.

‘Sacrifices?’ Michael exclaimed, startled. ‘Sacrifices to what? To whom?’

‘To the Evil One,’ was Henri’s quiet reply.

‘Do you mean that she’s crazy enough to pretend – to want people to think she is a sorceress?’

‘Terka is a sorceress,’ Henri said. 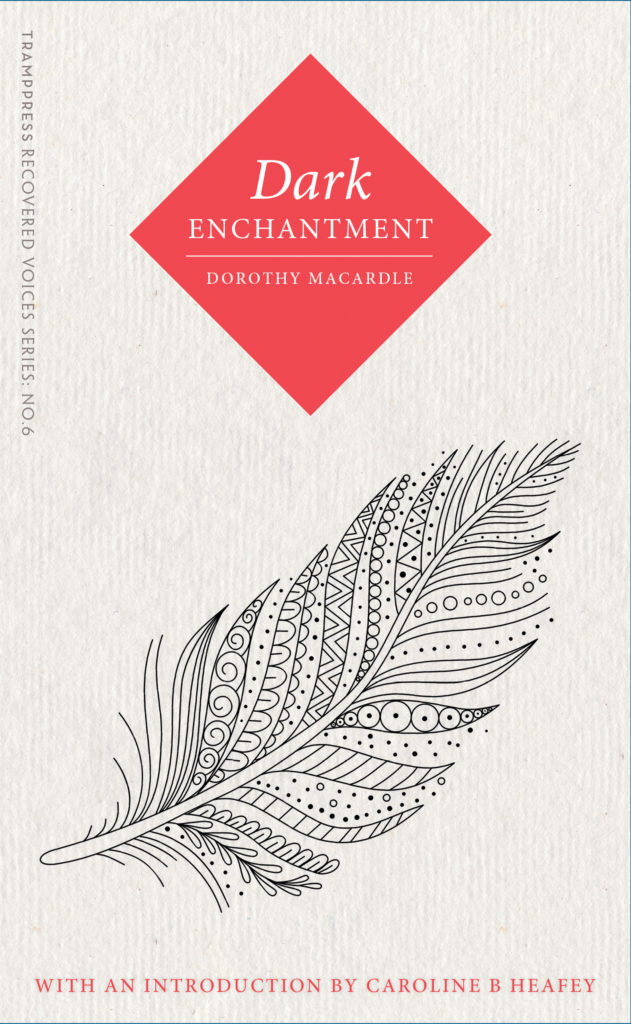 Dark Enchantment by Dorothy Macardle, published by Tramp Press, will be launched as part of the Dublin Book Festival on Nov 16th in The Gutter Bookshop, Dublin 2 at 6.30 pm

Read more: 11 of the cosiest pubs in Dublin to spend the festive season in

Read more: Explore beauty in all its forms this weekend with What’s On

Read more: The family will love any of these 10 must-have board games this Christmas