How I Finally Gave Up Dieting And Negative Self-Talk

Ellie Balfe on the long road to body confidence and ditching the dieting.

I am 42 years old and I have lost count of the times I have tried (and failed) at diets. I am not seriously overweight by any means; I would like to lose a stone, but look, that’s always the way.

Because how I am is fine. And I know that – but why is it so hard to really feel it?

Only last night, I was staying at a lovely hotel attending a press event and as I got ready, I caught myself in the mirror after showering and noticed my tummy in it’s less-than-taut state, I saw the dimples on my thighs and felt the immediate rush of something close to shame, followed swiftly by thoughts of the 5:2 diet and ramping up my walking and yoga routines.

And I felt a bit shit.

A couple of years ago, I did an Eight Week Transformation fitness programme and I lost a stone, toned up and I felt (and looked) amazing. I kept up the fairly strict regime (no carbs, no dairy, no booze) for a good while afterwards and all was well. Then life happened. Then my mum and daughter got sick. Then my focus shifted. I was really busy and I needed some comfort, so I, like loads of us do, ate toast, chocolate and had glasses of wine – to soothe me.

And it worked; my mum, daughter and me got through a crappy 2016 after a brace of hospital stays and stress. I gained some weight, but who the Hell cares?

In that shit-show that was 2016, something deep shifted in me. I felt a primal connection to my mother as her daughter, and to my daughter as her mother. I felt that semi-cliché lioness thing, where I needed to protect and fight for them both. And that’s what it was – a big, long fight to make doctors talk to us, to make politicians release drugs, to make hospitals keep their promises of surgery dates – it was the big stuff.

And what I started to notice was confidence. My own confidence in myself began to grow, I heard my own voice in situations I didn’t think I would ever be in. I heard myself talk in terms that are not typically my style; I delivered fierce ultimatums, I wrote the most loaded, powerful words that I could muster to persuade people of a much higher professional status than me to take actions that were in their power, but beyond mine.

When you’re fighting, you don’t think about how your body looks, you think about what you need to do.

Long story short; I gathered support and lobbied the health minister to release a vital cancer drug that my mum, and 200 hundred other people in Ireland needed. It worked; we got it.

The day I got a call from the minister’s office to say that the drug was being released a year early and would come on stream in a matter of days was one of the pivotal moments of my life. As was the day I sat beside my mum as her consultant wrote the prescription for it in front of our eyes. At the same time, I was fighting for my four year olds hip surgery that had been cancelled three times that year, at the last minutes prior, causing my little one massive emotional stress.

So, a lot was going on. And my focus was outside of my body, my focus was off criticising my body, it was off Instagram – that addictive comparison machine that we all fall foul to?

My focus was on the fight for other peoples’ bodies to be healthy and cared for properly. A light went on for me, I had so many new thoughts; how lucky I am to have a working, powerful body when so many don’t. How lucky I am to have a voice to shout, a fist to raise, a punch to throw if needs be (not really, but you get me!). I felt confident.

And God knows, we need to feel powerful. Women must, and thankfully are, rising up. As the t-shirt says that Stefanie Preissner so fiercely wore on a recent IMAGE cover this: Females Of The Future, yes! Females ARE the future (sorry males, I don’t mean to be sexist, but it’s our time). 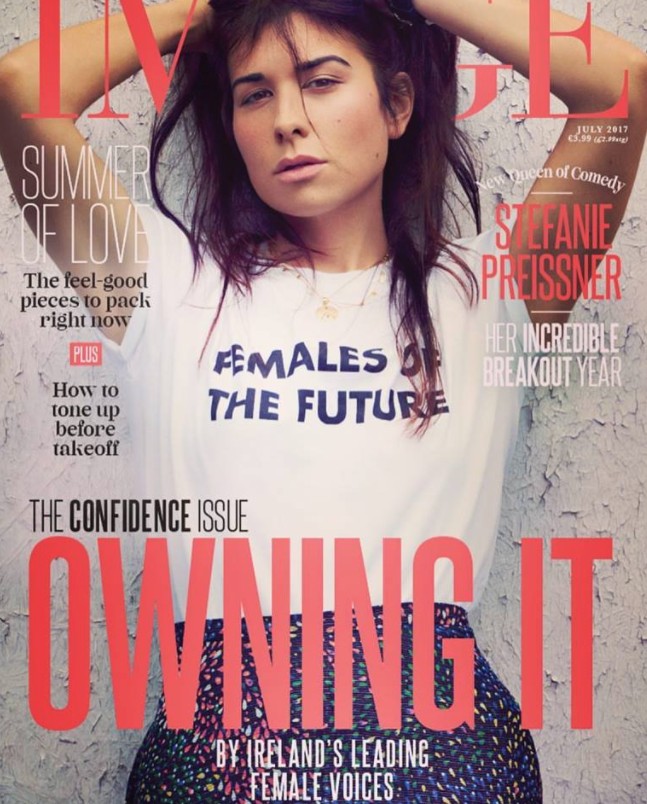 Enough of the negative self-talk. Enough of the talking small and walking even smaller that has often been the way of the ‘polite lady’. The world is in a right state and we have to get out there and fix it – the men have made a bit of a balls of it of late, no? We’re on the rise, we know it and they know it, and we all know it’s right.

Well, treat them as such. But the challenge is to start with ourselves.

Our daughters are our greatest achievements, they are the next wave – they are so Goddamn vital to the evolution of the world that we must constantly cherish and champion them. They need to know they are brilliant and worthy, powerful beyond measure and they deserve respect. They don’t have to earn it. They certainly don’t have to modify or re-model themselves into that space. They must feel only potential; their self -doubt must be quashed. They mustn’t feel less than others, like we do sometimes.

And, how do we lead our daughters to this place of confidence? We walk the walk ourselves. Don’t speak of diets in front of our young ones, that only creates a narrative of ‘you’ll be good when…’.
No. They are good now. They are good always.

Don’t covet others looks, lives or lovers – damn you Instagram – comparison is the thief of joy – never a truer word said. We must tell them what their bodies can do – not talk of limitations or how they need to look different to be accepted or liked. They need to know our bodies are the most amazing treasure we’ll ever own and to treat them as such.

Just now, I took a video call from my daughters on WhatsApp and the first thing I noticed in that spilt second as my face filled the screen, was my slightly double chin – and I didn’t like it. I felt those feelings. You know them – we all know them. It’s the ‘must try harder to lose weight/tone up/be better? thing again?

But the second thing I noticed was my sheer joy at seeing my kids on the screen and the surge of pride in the knowledge that I Made Them! My body made them!

My body is good. Our bodies are good, for they are the powerhouses that can do awesome things – like make other people!

It’s not easy to be body confident. It’s a big piece of work on our inner narrative, but it’s a vital one. We know body shaming others is wrong, so we try not to; yet we do it to ourselves. It’s a very tangled knot.

I know I’m not there yet, but I’m getting there: two weeks ago, as the sun delightfully scorched us, I went swimming in the sea most evenings – I didn’t feel entirely wonderful peeling off my clothes and baring the wobble, but I felt ok. I saw all the other people doing it and I just jumped in. Literally. Life is too short and too damn fragile to worry about cellulite and extra pounds. It’s our voices that are most needed?

Photo by Christopher Campbell on Unsplash