As The Man from U.N.C.L.E. arrives?in theatres today, we share our exclusive interview with Hollywood’s latest crush, Mr Henry Cavill.

Call me jaded, but blockbuster ?hotties? are?a dime a dozen these’days. Don’t get me?wrong – I have yet to meet?a Hollywood A-lister who has been anything less than pleasant and polite, engaged in my questions, and happy to pose for a photo. But, when my friends squeal at my invitation to meet Henry Cavill ahead of his latest movie release,?The Man from U.N.C.L.E., in Rome,?it’s no surprise that my excitement lies more in the location rather than the subject. Researching Cavill, however, reveals a few gems: his excellent sense of humour, as seen on The Graham Norton Show, where he revealed that his niece regularly announces her uncle’s status?as Superman to anyone who will listen; and the fact that before his foray into acting he was destined for rugby stardom. Maybe this guy has a little more up his sleeve than I’ve allowed for.

Fast forward to bella Roma, inside the dizzyingly ornate Grand Hotel Plaza, where I await Cavill’s arrival. After much shuffling of bodyguards and PR personnel, Henry arrives at our table almost unrecognisable, masked entirely in a beard, and buff beyond ?words. In spite of myself, I am utterly beguiled. He warmly introduces himself and settles in for a chat, complete?with espresso in hand. Conscious of?his astounding physical presence, he immediately addresses the elephant in the room. ?They used to call me Fat Fat Cavill in school, you know,? he smiles wryly. ?I was a chubby kid. This is all very new to me.?

Henry plays CIA agent Napoleon Solo in The Man from U.N.C.L.E., a Guy Ritchie remake of the hit 1960s Cold War TV spy series. The movie is typical of Ritchie: slick, smart- witted, and rammed full of shoot- em-up stunts and explosions just for the hell of it. It’s the perfect summer blockbuster. What elevates the film, though, is its noteworthy style. Lauded costume designer Joanna Johnston has sprinkled her movie magic across the production, from Alicia Vikander (Ex Machina, Anna Karenina) in Twiggy- esque 1960s style to Elizabeth Debicki (The Great Gatsby) in vintage Versace, not to mention Cavill himself, who tumbles, quite literally, through Rome’s plazas and cobbled streets dressed to perfection in an array of bespoke three- piece suits. It’s a stylistic joy to witness. 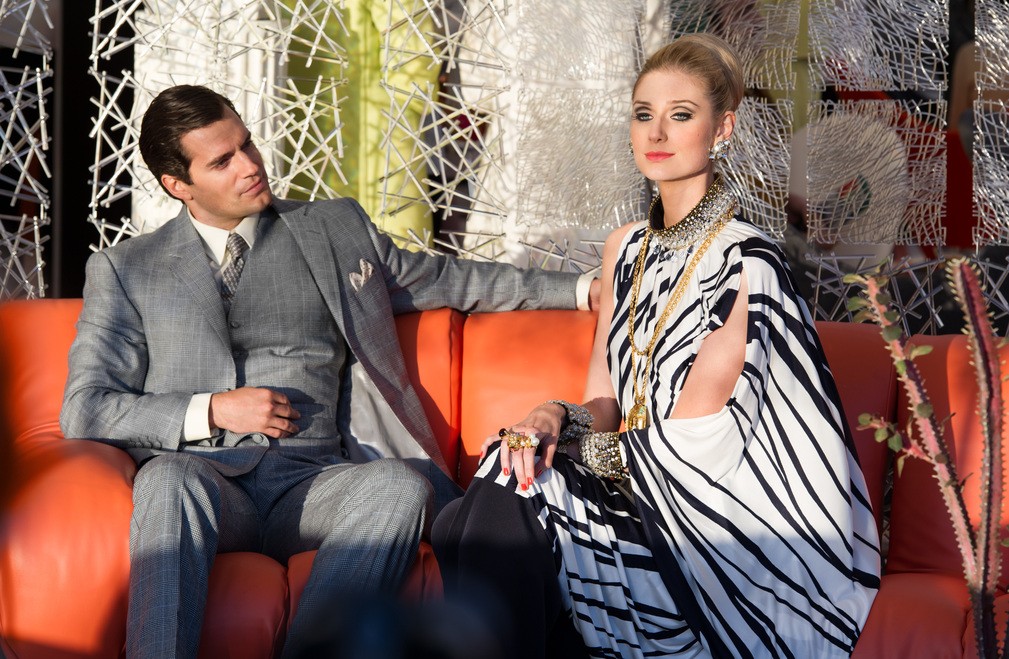 Back with the man of the moment, the conversation kicks off with all things Irish. ?I know Ireland very well,? he reminisces. ?I filmed The?Tudors in Wicklow, and that was a truly brilliant time. There’s nowhere better in the world to unwind. I’d happily live in Ireland.? Having played Charles Brandon in the period romp, Cavill recently won fame as Superman in Man of Steel, a subject he is loath to talk about, due to contractual restraints (Man of Steel 2 is due for release early next year). How is it going? ?Good,? he beams broadly, and then swiftly moves on. What he is delighted to chat about, though, is his director for this project. ?Guy (Ritchie) is the reason I took on this role. He is such an exceptional human being – eclectic, charismatic, unique. He injects himself into the characters. On set, it was all big rugs, guitars, drinks, a total boys? club. But we definitely didn’t mess around – he?put us to work.? If his impressive physique is an?indication of his work ethic, his laid-back and gentle demeanour reflects his personal side. He comes across as a normal (as you can be in this industry) 32-year-old bloke who’s a bit of a homebody. ?The thing I miss most about working so much is my bed,? he confides. ?There’s something about sleeping in your own place, on your?own time that is so deeply nourishing. I haven’t seen’my own bed in countless months now. Over time, that wears you down.? His connection to home, the Channel Island of Jersey, is evident – references to his family are dotted throughout the conversation, and he’s the proud spokesperson for Durrell Wildlife, an animal conservation group back home. ?It’s a childhood thing. I’ve always loved animals, and I want to use my privileged position for good.?

Henry is single right now (having been previously engaged to British equestrian rider Ellen Whitaker, and subsequently linked to The Big Bang Theory‘s Kaley Cuoco), but I doubt he gets to enjoy that status – with a workout regime as intense as his and a burgeoning filming schedule, he’s more likely to be found enjoying a Netflix binge than partying. ?I love Suits. Makes me want to quit my job and work as a high-powered lawyer.? And something about the way Cavill says that tells me he would use his power only for good, never evil.

Want some more? Behind the scenes in Rome for #manfromuncle #HenryCavill #armiehammer

The Man from U.N.C.L.E. is in cinemas nationwide from August 14