WATCH: Kildare man shares a video of his evacuation from Wuhan, China 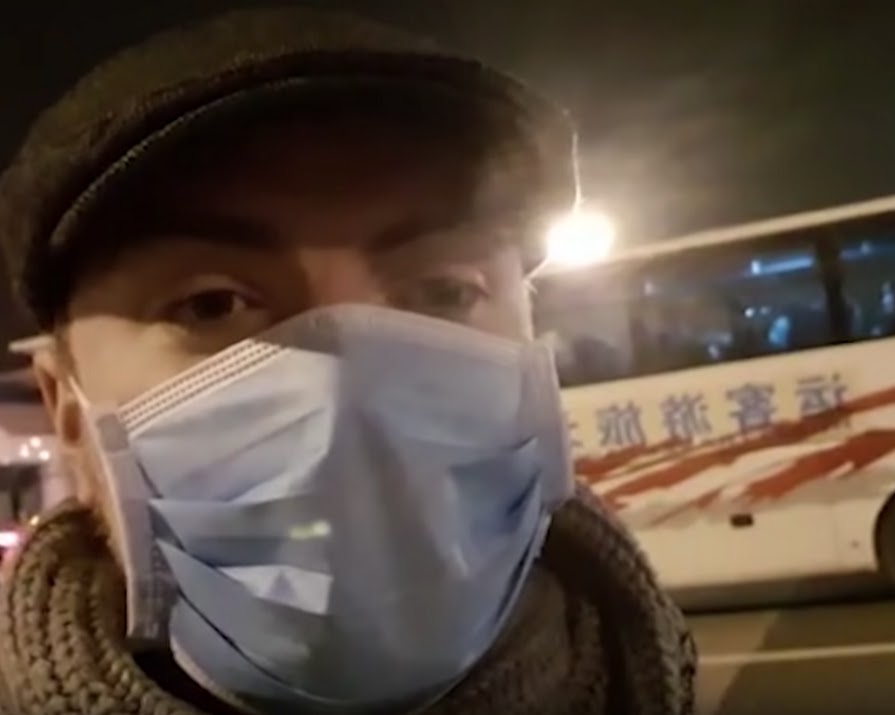 Irish man Ben Kavanagh has been evacuated from the quarantined city of Wuhan in China. Here is his video footage of the journey

Originally from Co Kildare, Ben Kavanagh has been working as a teacher in Wuhan, China for two years. Now, he and two other Irish people are en route to a quarantined zone in the UK, having finally been evacuated.

Wuhan is being described as the ‘epicentre’ of the coronavirus outbreak. It was here the virus originated from; namely the seafood market in the city centre. Since then, it has spread to approximately 10,000 people in China alone (causing 213 deaths), while cases have been reported in 18 other countries. As recently as Friday morning, two new cases have been confirmed in the UK.

Since the outbreak began, Ben had been largely confined to his city apartment (only venturing outside to stock up on food supplies at the local supermarket). On these brief ventures outside, he was forced to wear two face masks across his nose and mouth, eye goggles and gloves in an effort to avoid contamination.

Earlier in the week, Ireland’s Minister for Foreign Affairs Simon Coveney said he was “confident” he could secure plane seats for Irish people who want to leave. In the end, seats were secured on a plane flying out various UK and French citizens.

Simon Coveney also said, “When they arrive back in Europe, they will have to go through the appropriate health measures to ensure that they are not carrying infection and their healthcare needs are being looked after as they should be.”

This was a crucial factor in Ben’s decision to leave. Speaking on RTÉ’s Morning Ireland radio programme, he said he would only take the option to leave Wuhan “if the right circumstances are in place” – such as a two-week quarantine for all passengers on-arrival in the UK.

“As long as we know everyone on the flight can’t infect anyone else in the public, then that’s ideal,” he said.

Ben documented his evacuation from Wuhan in a video for Channel 4, which you can watch in full below:

Read more: Coronavirus confirmed in the UK – here’s everything we know so far

Read more: What is the Coronavirus and what are its symptoms?

Read more: Chronic Migraine: how sea-swimming has helped to reduce my symptoms