It’s not the first time we’ve heard that music has helped celebrities overcome rough patches during their lives. But here is a super sweet story we were never expecting.

Before the Ed Sheeran that we know and love today – the one with the guitar-accompanied romantic songs and his own record label – he was just another little red-headed youngster in primary school, bullied and teased by the cool and popular kids in his class because of his speech impediment. When, a few days ago, he was honoured at the American Institute for Stuttering Free Voices Changing Lives Gala, he delivered a speech revealing how he defeated his stammering speech. Incredibly, the answer lay in all round nice-guy Eminem:

?My Uncle Jim told my dad that?Eminem was the next?Bob Dylan?? it’s pretty similar, it’s all just storytelling – so my dad bought me?The Marshall Mathers LP when I was nine years old, not knowing what was on it. I learned every word of it, back to front, by the time I was ten. He raps very fast and melodically and percussively, and it helped me get rid of the stutter.? 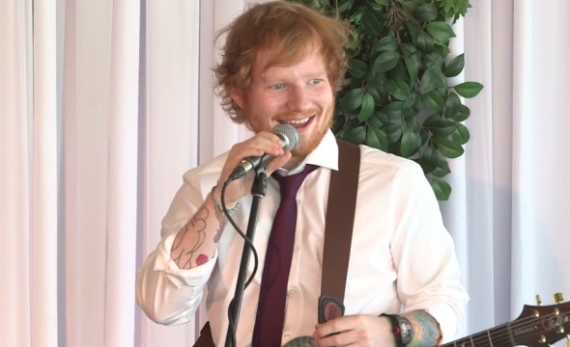 We’re hoping that some grainy VHS footage of ten year old Ed rapping leaks soon. In the meanwhile,? the multi-platinum award-winning artist has told us all to embrace our wierdness and quirks because even though he was ?a very very weird kid?, things still worked out pretty well for him.

If Ed continues along his path of world stardom and Ruler of Earth, we’re expecting a ?The King’s Speech?-esque feature film about Sheeran owning his stutter to grace our screens in the next few years. Here’s hoping!