Bryony Gordon: ‘I feel like we all suffer from this mental health issue, which is self-loathing’

When I last saw Bryony Gordon, we were standing in her kitchen, conducting an interview for her second book, 2016’s Mad Girl. “Can you check that this has no bleach in it,” she asked, holding up the cup she was about to pour juice into for her daughter Edie.

The memoir covered Bryony’s battles with OCD, which she developed aged twelve, first thinking she had AIDs, the alopecia she developed aged nineteen (‘Donald Trump with a comb over’), her bulimia, an affair with a married man, drink, drugs, and an abusive relationship. It was heavy stuff, and the revisiting of it had unleashed a brutal bout of OCD which had left Gordon fearful that she had hurt her beloved daughter, and then forgotten about it (such is the nature of OCD; it often creates fears around the most loved).

Her latest book, Eat, Drink, Run. How I Got  Fit Without Going Too Mad, published last week, follows the story of how, after publically declaring her struggles with mental health, Gordon went on to become a mental health campaigner, and spoke to Prince Harry for her podcast in a ground-breaking interview in which the royal spoke about his own struggles with depression and chaotic mental health due to years of not dealing with the death of his mother. Oh and she ran a marathon.

“I didn’t enjoy writing Mad Girl, but my God, it has changed my life,” Bryony tells me now. “Mad Girl, was, in an upbeat way, getting all the shit out. Eat, Drink, Run is more ‘if I can do it, you can too’. It’s a running book that’s not about running. It’s about doing the things that you think you can’t do. And the limitations we put in front of ourselves, because of mental illness, or because of the culture of body hatred we grow up in.”

Bryony originally wrote about her own struggles in her Telegraph column. Struggling whilst writing Mad Girl, her OCD had almost taken over. “I couldn’t hug my child. When I looked at her the love I felt was overwhelmed by the fear that I had done something terrible to her,” she writes. She was unable to leave Edie’s cot side at night, repeatedly returning to check that she had not injured the baby, until her husband Harry set up a bed there, so Bryony could get a proper night’s rest in their room.

“Anyone, anyone out there who feels the same way as me?” was the real point, she says now, of that first column. “It was total desperation. It was ‘please, someone write back to me and let me know that I am not alone in this’.”

The column, and later the publication of Mad Girl in June 2016 set off a tsunami of responses from those in similar circumstances, confessing that they too had the type of OCD which makes you believe you might be a paedophile, or a serial killer, or suffered with other mental illness issues.

It was at this time that out of sheer desperation she also decided to give running a go. Clad in her husband’s old Star Wars t-shirt, a pair of leopard print Converse with holes in the heels and clutching a pink plastic beaker of her daughter’s, she headed out. It was tough, but it was “twenty minutes not sat inside in my own head.”

Gordon has since gone on to found Mental Health Mates, a sort of AA for those with mental health struggles, where strangers meet for weekly walks and chats. The organisation now has meetings all over the UK, in New York, San Francisco, and Dubai.

In the book, Bryony writes of her grandfather Petee, a committed atheist, who taught her about the word numinous. What he was trying to explain, she says is “the concept of higher powers and spiritual awakenings…Something that was numinous…was something that had a divine quality to it, something that felt special, almost magic.”  She feels it that day at the first Mental Health Mates meeting, as she announces to a group of strangers that she has an illness that sometimes makes her think she has molested a child or killed people.

Saying the words out loud for the first time and being greeted with understanding, she writes “I realise there really is magic in the world. There is magic everywhere.”

It is ironic that one of Gordon’s main struggles, one she eventually overcomes, is a crippling dislike of her self. Because Gordon herself is, of course, one of life’s magic people. We all know them, those people who are so essentially, and beautifully themselves, a combination of warmth, humour, fun, and love; the world seems that much more vivid in their company.

Numinous she tells me now “is that feeling that you’re not alone anymore, that there is something bigger out there and that you’re all part of it. I guess it’s my version of a god. The hairs on the back of my neck stand up when I think of the people I’ve met through Mental Health Mates who live literally two streets away from me, who suffer from the same thing. And all this time I’ve been lying in my bed thinking I was alone. There’s something really magical about that.”

Eat, Drink, Run charts Bryony’s burgeoning self-acceptance, most  importantly of her own body, which had become “fat enough that readers had started to write to me to tell me how fat I was.”

For most of her life, she had only focused on what her body couldn’t do. Handstands, attract boys, be thin, be toned. In running the London marathon, and most recently, running it again in her underwear to prove runner’s bodies come in all shapes and sizes, she found a self acceptance she had never experienced. “I feel like we all suffer from this mental health issue, which is self loathing. I noticed it when I did the marathon in my knickers and bra. There were people coming up to me and saying ‘oh my god thanks for doing this, I couldn’t do that. I hate my body. I’m so ashamed of my body’. And I’m like ‘you’re running a marathon with it. Come on’.”

“People say to me ‘oh you’re successful and you’ve done well’. And I say ‘the moment I started doing well in life, or achieving the things I wanted to achieve in life, was when I was honest about who I was’,” she tells me.

No more tangibly is the powerful effect of speaking out so obvious as in Gordon’s relationship with Prince Harry- she ran the marathon in aid of Heads Together, the mental health charity established by the two Princes and the Duchess of Cambridge, he agreed to the milestone interview which led to his own revelation of mental health struggles.

“The magic of it was that we are all the same. We walk around life thinking ‘oh so and so’s got it all sorted’. We never know what is going on underneath.” 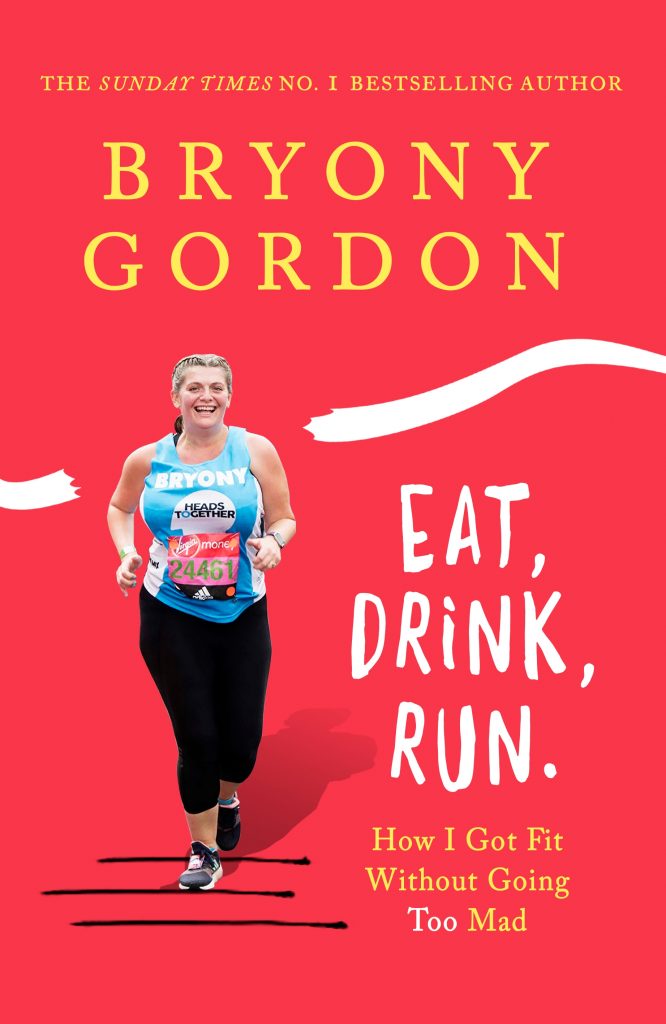