Death Of The Cupcake

Good riddance to the jumped up fairy cake…

Last week saw US cupcake franchise Crumbs close its stores nationwide and thus the death of the cupcake was declared. It’s not everyday a baked item elicits countless obituaries but not every bun in the oven had quite the pop culture legacy of the cupcake. The last Crumbs cupcake was even put up for auction on eBay for $250, which is the modern ringing of mournful church bells.

New York Magazine traced the Great Cupcake Hysteria to 2000, when Sex and the City‘s Carrie Bradshaw paid a visit to Manhattan’s Magnolia Bakery in one episode. Bradshaw et al literally put cupcakes on the map as the chic bakery is now a stop on the city tour inspired by the HBO hit series. Ever since, this sugary confection, essentially a jumped up fairy cake with more polite decoration, has been the bane of sweet teeth everywhere. An inescapable pastel bedecked blight across caf’s that left no one satisfied. In fact, Sex and the City scribe and producer Michael Patrick King even went on to make cupcake entrepreneurship the focus of his recessionista sitcom 2 Broke Girls. 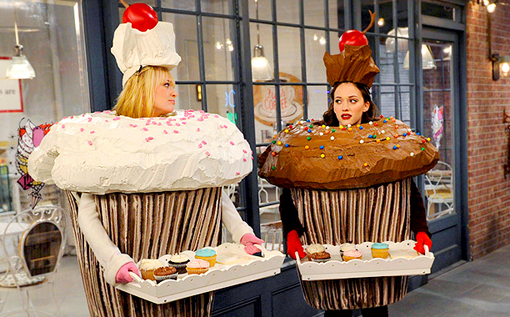 We say goodbye and good riddance to the cupcake. The trend for pretty dessert and delicate sweets has been boring us for some time. Macaroons? Only good for Instagram. If something can only be described as a ?confectionary concoction? we’re not at home. We here at Image.ie want to make a case for old-fashioned cake and tart. Anything that finds its genesis in noughties Manhattan can turn back around. We’re thinking Ballymaloe, Clodagh McKenna, our grandmother’s kitchen. If you want some modernity check out Nigella’s unapologetic back catalogue.

Dessert should be a gloopy disastrous affair. Dates haphazardly embedded in homemade brownies ought break away with your bite and get stuck in your teeth. An encounter with your mouth should always lead to cake crumbling with floury debris raining on your lap. An ideal apple tart is lumpy with pillows of undistributed cinnamon rolling unbidden across your taste buds. Victoria sponge needs to always be a bit too much – jam spilling out the sides, cream too thick. Lemon drizzle should have a smug kick, always rejecting cuteness.

What do you think – will cupcakes be missed, or are we well rid of all that icing? What dessert do you want to see make a comeback? Let us know!