A dead sperm whale, who washed up on the coast of Indonesia this week, had almost six kilograms of plastic in its stomach.

The 9.5-metre long animal was found on the shore of Wakatobi National Park with 115 plastic cups, four plastic bottles, 25 plastic bags, two flip-flops, a nylon sack, and more than 1,000 other plastic pieces in its belly.

Dwi Suprapti, the marine species conservation coordinator at WWF-Indonesia said, “Although we have not been able to deduce the cause of death, the facts we see are truly awful.”

Indonesia is the second-largest producer of plastic waste in the world; second only to China. According to a report by the Asia Times, almost 1.3 million tonnes of its plastic waste ends up in the ocean. 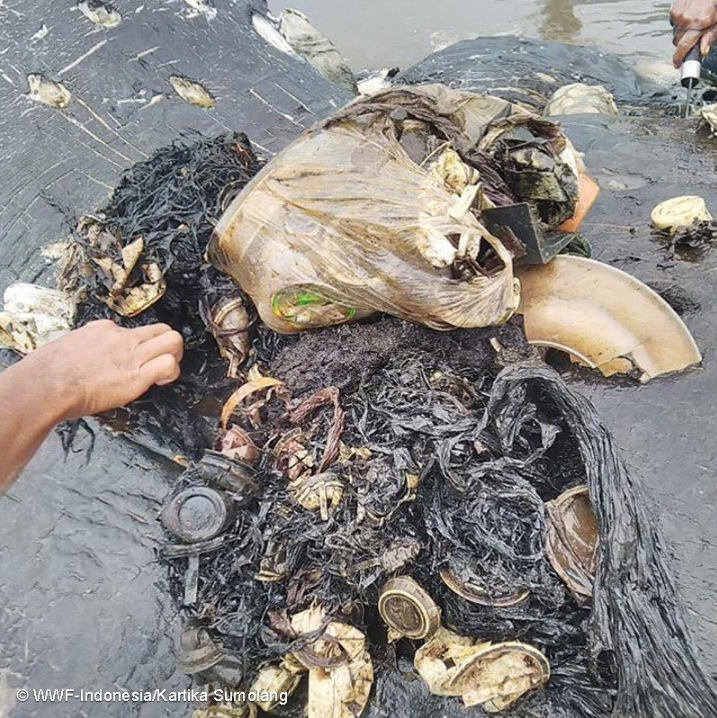 Sadly, this whale isn’t the first to be found in this state. Earlier this year, a male pilot whale died off the southern coast of Indonesia after consuming 80 plastic bags. Conservation experts said the plastic in its stomach made it impossible for him to digest nutritional food.

Plastic does not biodegrade, which means every single piece of plastic that has ever been made is still floating around in our environment somewhere. While it may have broken down into smaller pieces, plastic items will never fully break down in a natural, eco-friendly way.

Related: These brands are committed to saving our environment

It’s a common occurrence for marine life to mistake this waste for food. In fact, a recent study by NUI Galway shows 73% of deep-water fish off the Atlantic coast of Ireland have plastic in their stomachs. That doesn’t factor in the fish swimming near the surface.

Not only are whales consuming plastic directly, but they are also consuming smaller fish who have ingested microplastics. There is only so much waste these animals can take before it becomes too much.

For tips on how to break-up with plastic for good, click here.

This cosy cottage along the Wild Atlantic Way is on the market for €165,000