Just when we thought we were over the past year of celebrity breakups, news has emerged this morning that Cheryl is reportedly set to divorce husband, Jean-Bernard after just 18 months of marriage.

According to The Mirror, the X-Factor judge has begun the legal proceedings, citing “irreconcilable differences” as the reason for the separation. ?The pair have apparently been living separately for the last five months.

The couple married in secret in July 2014 on the?island of Mustique, after a whirlwind three-month courtship. The news was a surprise to everyone until the former Girls Aloud singer revealed the news via Instagram. Remember her black dress of choice?

Though few are likely surprised by the revelations, the 32-year-old hasn’t had much luck in the way of love; she underwent a painfully public divorce from footballer Ashley Cole in 2010 and call us old fashioned, but we liked the thought of her getting swept off her feet and finding?her happy ending. 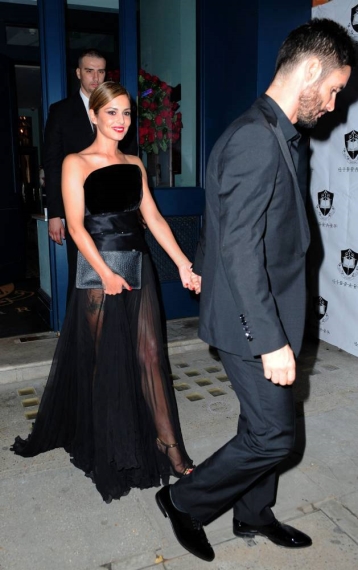 Though professionally things have looked up for Cheryl in the last 12 months ?- she returned as an X-Factor judge – she hasn’t had an easy time personally, with rumours of a split in the news every other day, the constant criticism over her weight and that alleged cocaine incident. But on the plus side, it seems that the spilt has at least been amicable (despite Jean-Bernard’s recent spate of cryptic Tweets), with a source saying that the pair are determined to remain friends:

“In the end Cheryl realised she had married too soon and had been swept away by a bit of a whirlwind romance,” said the source. “Over time it became clear to each of them that they were very different people and from very different worlds.?They are now focusing on making sure they stay friends. The divorce is amicable and they have both said they will always be there for each other.”

The pair were last seen together in public in October – hand-in-hand at the joint 40th birthday bash for I’m A Celeb hosts Ant McPartlin and Declan Donnelly.

Also, the topic of much debate is Cheryl’s decision to spurn a prenuptial agreement, prior to the marriage (she did the same when she first wed Cole). Given that the British singer is one of the biggest stars in the UK, and worth an estimated €20 million, we can’t help but wonder of the potential pitfalls of this. However, plenty of celebrities have also opted to forego this modern tradition – Katy Perry, Reese Witherspoon – and the courts have respected their decision to understandably not want to fork over half their earnings to a former spouse. So it might not go pear-shaped in Cheryl’s case, especially if they parted on good terms.