Can’t Cope: How I Overcame The Toughest Year Of My Life

I’ve learned that mastering the art of self-serenity is something that is gained through experience. Now in my 23rd year on planet Niamh I’m reflecting on the toughest year of my life to date, and the coping mechanisms that got me through the times when I didn’t think there was any light left in the world. While most people my age learn to cope with the woes of college (scary), living alone (scarier), and future prospects (the scariest), I had to cope with losing my mobility, losing an organ, defeating cancer, and the death of my brother; while simultaneously tackling the former three.

When I was 13 I woke up one morning to find that my spine had twisted around the other side of my body after I had taken a weird, freakish, growth spurt in my sleep. I resembled something from a zeitgeist horror movie, but I felt nothing. Fast forward ten years and my body had been pulled, twisted, contorted, sewn up and ripped back open seven times over. While I have never felt ?ill?, being sick from such a young age meant that the fun of growing up was put on hold, and improving my health took centre stage.

My ten-year stint with Scoliosis came to a firm close in March 2015 when I completed the final of four gruelling operations. I’m fused from the base of my neck to my pelvis – meaning that my spine and pelvis are one solid mass of bone – and I can’t bend forward, backwards, left or right. But I was looking forward to moving on with my life and make up for the things I’ve missed out on. 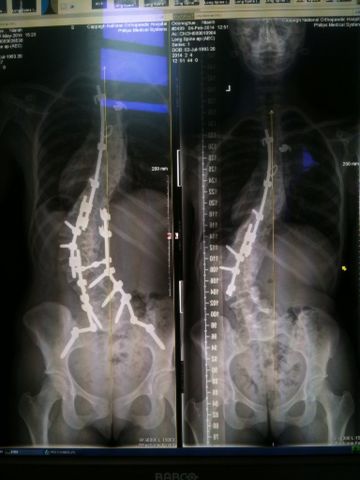 Left-Right: my spine now versus my spine after my second operation

Except when does anything ever go to plan? While I was mentally preparing myself for my final op in March I found a lump on my neck, and while I was told it was nothing to worry about, this growing lump was my bodies? way of telling me that something was out of whack – and I was right. But, while all of this was going on, I was having these bizarre episodes of stabbing-like pain where my left kidney was. I was starting to believe when people called me a hypochondriac. My operation came and went while I was simultaneously going through several biopsies for my mysterious kidney and neck complaints.?My hunch was right and in September 2015 I was diagnosed with aggressive thyroid cancer. Two weeks later another bombshell dropped on my life and doctors discovered that only one of my kidneys was working. Want to know the strangest thing? None of these diseases are even a tiny bit related to one another. I got exceptionally unlucky odds in the gene-pool.?

I frequently count my blessings for having the ability to stop myself from falling into a downwards spiral of depression; especially when there were many weeks when I couldn’t get out of bed.?In the beginning, my only coping mechanism was to ignore the reality of it all – which, admittingly, I still do from time to time. But now I’ve learned to stop, think, and listen to my body and to avoid stressful situations. Being healthy means finding the balance between your physical and mental wellbeing, and when the two align, you’ll feel your best.

I Exercised. Strangely,?I turned to physical activity when I was at my least active. Endorphins are peptides which activate the bodies opiate receptors, causing an analgesic effect. In English: exercise makes you happy. Because I had limited mobility I started off slowly with a 20-minute walk. Exercise has not only made me physically stronger and has boosted my immune system, it has given me new levels of confidence.

I Cried, A Lot. For a long time I chose to hide my feelings behind a fake facade: I wanted to be seen as tough, not weak. All of my pent-up negative energy had nowhere to go and so my mood became low and I was sad and angry a lot of the time. Crying allowed me to accept what was happening to my body, and what’s more, crying releases and relieves stress hormones.

I Got Rid Of ?Toxic Friends.?It’s a general rule of thumb that when?you’re experiencing any kind of unpleasant situation, you should only surround yourself with lovely, sound people.?While this was tricky to do at first, I quickly learned who my true friends were – the ones who gave me true support throughout.

I Told Myself That I Am Beautiful. As my body had gone through so much trauma in such a short amount of time, I was feeling extremely conscious and down about my new scars. For three days after I had surgery on my neck, I refused to look at myself. Now I have accepted my body, and I’m proud of my lumps and bumps – and you should be proud of yours too. 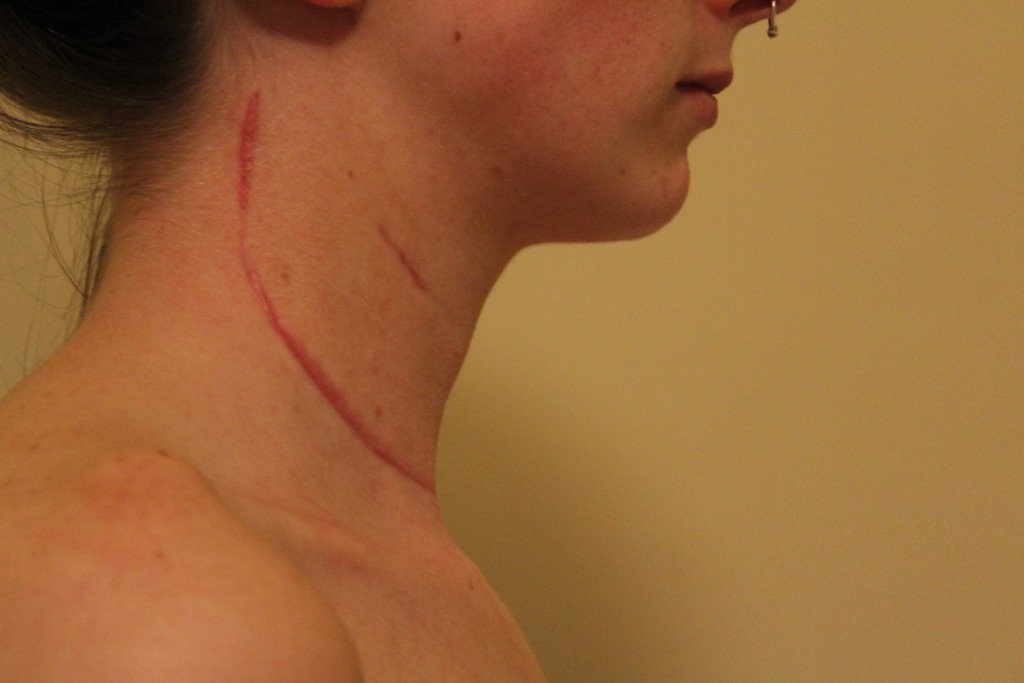 I Listened To My Body. I listen to my body when it tells me it needs to rest. More often than not my mind wants to run around and be active, but my body sometimes lags behind. But do you know what? It’s absolutely okay to have lazy days on the sofa. In fact, it’s what the doctor ordered.

I Got A Hobby. I enjoy writing and putting pen to paper (or finger to keyboard) was a great stress relief and allowed me to vent things that I might not have felt comfortable saying out loud. It also worked as a big distraction for me when I was in pain. Remember; it’s mind over matter!

I Compared Myself To Others. For me, this was most important because comparing myself to others reminded me that there is always someone who is worse off than you. By opening my eyes and seeing the bigger picture I was able to set realistic goals for myself and to realise just how lucky I am. Is a bad hair day really that bad?

While these coping mechanisms won’t work for everyone, they played an important part in restoring my physical health while keeping my mental health in check. I continue to live my life this way and I feel ready for any challenge that life throws at me. So next time you think that you #cantcope, remember that you can.

Supper Club: These cheesy courgette boats are a great (and simple!) snack idea