Cannes mother and baby row: Another sign the festival has a long way to go

Cannes is a prestigious festival; renowned for its glamour and celebration of the best the film industry has to offer. However, when it comes to issues of gender equality, it is quite some time away from making any real progress. Jennifer McShane reports

When it comes to the Cannes Film Festival. It is a celebration of incredible art and it honours its craftspeople well. If a movie is selected for Cannes, it’s a sign of great things to come. The red carpet is among the most glamorous in the world. And yet, when it comes to social change, to tangible progression – the festival remains lacking.

This week, Cannes has been criticised for its treatment of mothers and babies after a female director claimed she and her child were prevented from entering the festival site.

British director and poet Greta Bellamacina, whose film Hurt By Paradise is screening in the festival, said the festival refused to allow her to enter with her infant son.

Excited to be taking my feature film #HurtByParadise to Cannes Film Festival this year. See you soon ??? pic.twitter.com/j7tJh5sIRL

Ironically her film centres around a single mother.

She was initially told she would have to use another entry when she arrived on Wednesday, though after what she says was a “much stressful debate,” according to her statement on The Guardian, she was allowed in. She then said she was then told that her child would require a delegate’s pass, costing €300. Despite offering to pay the fee, she was told that it would take 48-hours to process her request and was asked to leave the site.

“I’m outraged at the absurdity of this backwards attitude,” Bellamacina continued in her statement. “As if female film-makers needed further obstacles to equality in our industry.”

“Ironically, my film is about a young single mother trying to balance her life as a writer. She is treated quite patronisingly in some scenes in the film, but never as rudely as I was treated as a mother at the film festival today.”

In a statement from the festival, Cannes acknowledged that there had been an error and that they were in the processes of correcting it.

“Unfortunately Mrs Bellamacina was not aware of these new provisions and following poor communication from a security officer and a registration host, she was denied access which should have been granted to her. The festival deplores it and has been working to correct it since then. Mrs Bellamacina will get the badges and access that will allow her to benefit from the various initiatives that have been taken this year, and to work in the best possible conditions.”

All this in a year when Cannes, to give credit, has been trying on this front, in the form of a platform called Le Ballon Rouge dedicated to assisting filmmakers travelling with children. It offers changing and breastfeeding facilities among other things. 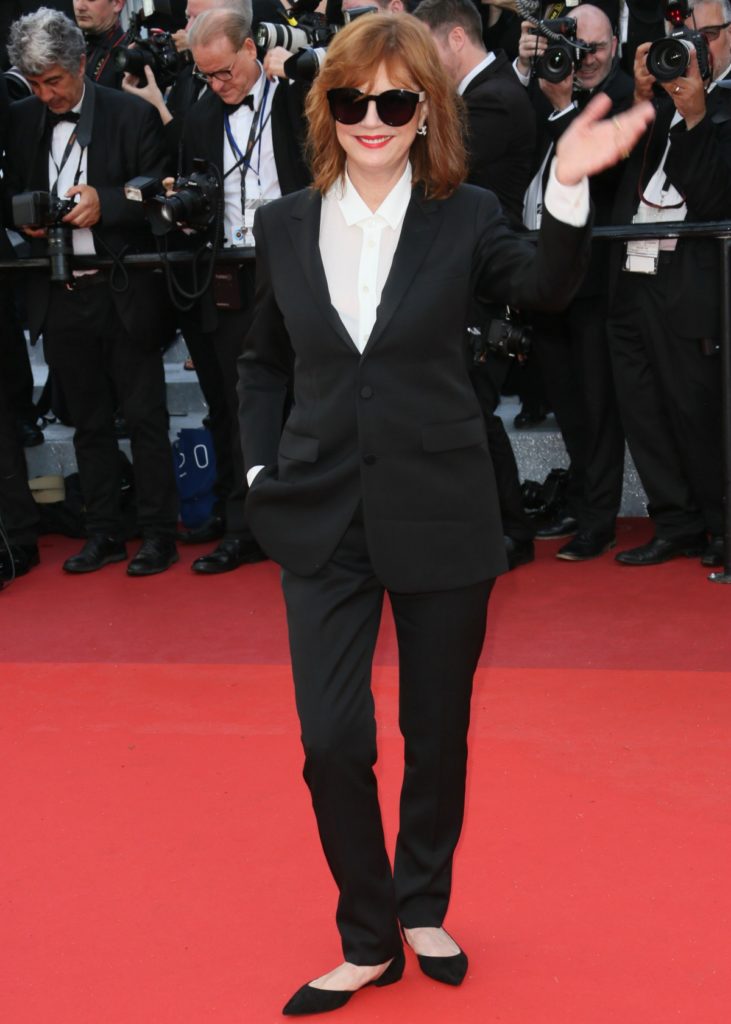 This isn’t the first time the festival has caused controversy for women attending the festival. In 2015, a number of women in their fifties were turned away from a screening of Carol, because their shoes were “not tall enough.” It was claimed the women were wearing rhinestone flats at the time, and though the festival refused to comment, a number of outlets confirmed that the festival considered it obligatory for all women to wear high heels to red-carpet showings.

Actresses such as Susan Sarandon and Kristen Stewart have since regularly broken it, but as of 2019, it still stands as a ‘rule’.

Cate Blanchett has led a protest on the red carpet at the Cannes film festival. 82 women stood in silence to highlight the lack of female directors at the festival. #Cannes2018 #7News pic.twitter.com/VufcCJNT4S

A year after a historic gathering of women at Cannes where the film festival pledged to take steps toward gender equality – the 2019 competition was picked by four women and four men – members of the French organization Le Collectif 50/50 have said the festival’s transparency on the issue is progress but, in terms of the numbers, they are a long way from catching up.

For the first time this year, Cannes counted the numbers of female directors who submitted to the festival, and those who were admitted. The festival said that it received 1,845 feature film submissions from 39 countries, 26 per cent of them directed by women. Its official selection of 69 films, both features and shorts, included 19 films directed by women, or 27.5 per cent.

Even at such a film festival, a great movie will never be an acceptable excuse.