Georgie Crawford is a name you probably recognise. Entertainment editor with Spin 1038, a regular on Xposé and a social media queen, to name just a few of her professional guises. Just a few months ago, this was Georgie’s life, along with a new marriage and an even newer, beautiful baby girl. Her bubbly voice was one that we were used to hearing chatting about celebrity gossip, new music and the best stories of the day.

She’s now using the voice we all know and love from the airwaves for a different reason; to encourage young women to check themselves for signs of breast cancer. In October, Georgie was diagnosed with breast cancer, just a few weeks after giving birth to her daughter Pia.

Related: How to check your breasts at home

In such an incredibly difficult time, Georgie amassed a new following; one that was supporting her journey through cancer. She has been completely open on social media over the past few months about the difficulties that she’s encountered and how she’s feeling about her diagnosis.

One of her most poignant posts went up just last month, when Georgie made the decision to shave her head. The process around that and how she feels now, as a stunning woman who obviously takes a lot of pride in her appearance, was what made me want to talk to Georgie about breast cancer and how it has affected her.

We start at the beginning. Back in October, Georgie was on maternity leave, gearing up to go back to work. During a night feed with her daughter Pia, she found a lump in her breast. The diagnosis came the following week, breast cancer, and Georgie’s mind went straight to Pia. “To hear I had cancer just seven months after having my first baby was devastating. I worried about all her firsts. Her first day at school, her first school play, I want to be there for them all.” 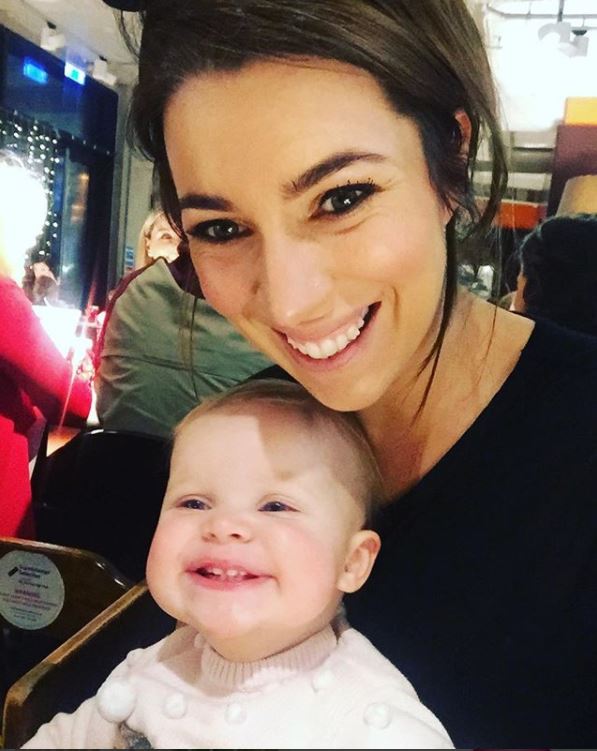 Georgie and her daughter Pia

Georgie had a lumpectomy and then began treatment, which would continue for five months. It was, and still is, a really intense time, and when she found out that she would lose her hair, it was another obstacle to face. “I thought about it every time I stepped into the shower, every time I blow-dried my hair, almost every time I looked into the mirror,” she said. “I wondered what I’d look like with no hair and how much my daily life would be affected.”

A Way to Celebrate

We don’t think of hair loss as a positive experience, but that’s exactly what Georgie turned it into, which is so indicative of her character. She began to plan the event as something that would be joyful, not just for her but for the people around her.

“From the moment, I was told I would lose my hair, I visualised what that night would be like. I’d have my closest family and best friend with me. There would be music and candles and my hairdresser, Danielle Garner, who was with me on my wedding day, would do it. And it never changed, every time I thought about shaving my head the scenario was the same,” she said.

And so, the night arrived: “It was the best decision I could have made because it turned out to be one of the most special nights of my life,” she told me.

Georgie was surrounded by family and friends and immediately took to social media to document the event to her followers. “Everyone said they got such a lovely feeling from it and it gave me such positivity. And when I think back to that night, all I remember is the feeling of strength and love and not my hair on the floor.” 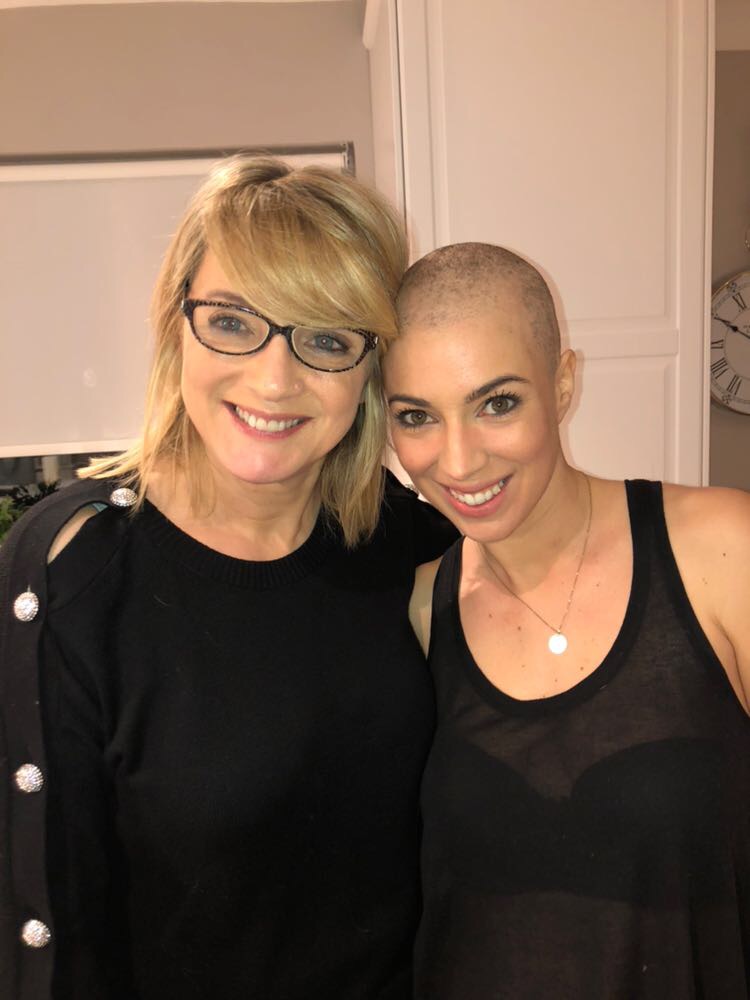 Georgie and her mum on the evening she shaved her hair

It’s amazing to see how Georgie dealt with the loss of her hair. Hair loss can be a cause of pain for many women dealing with cancer, but turning it into a positive step has inspired many. “With it gone, I felt like I could move on and put all my energy and focus into getting better. My hair falling out was also proof that the chemotherapy was working, so I tried to look at it that way.” It’s often said that it’s important to aim for a goal when navigating illness: “all I want to do is live for my daughter and my family, so if I must be without hair for some time to achieve that, that’s ok with me,” she said.

I wondered if Georgie was scared before hitting the ‘post’ button. “I always told my husband, Jamie, I would never have the confidence to post a bald picture online but the night I shaved my head I didn’t think twice about posting it,” she said. “The people I surround myself with give me confidence and make me feel like the same person I always was.”

This is something that is so important to many people facing cancer; to go on feeling like the same person, and that cancer hasn’t changed them. It’s something that Georgie wishes more people took into account when supporting a loved one who’s been diagnosed.

“It’s so scary to be diagnosed with cancer and life really does change in an instant. But you are still the same person,” she insists. “The days can be long and lonely when you are sick, so for friends and colleagues to still include me in the conversation means more to me than they’ll ever know. People can be afraid to share ‘trivial’ news with you because you have cancer, but honestly, distraction is wonderful.”

Georgie Crawford has become a household name in a different way since her diagnosis; she’s now respected as an advocate for breast cancer awareness. “Since I decided to share my story on my Instagram page, I’ve been blown away by peoples’ kindness. Everyone has been affected by cancer so to have people on my side makes me stronger every day,” she says.

She has also turned to advocating for health and wellbeing. “I have nine weeks of chemotherapy left and afterwards I’ll have radiotherapy for four weeks. I have weekly chemotherapy sessions so it’s important to stay healthy, so my treatment isn’t delayed.” This means that Georgie has had to practice self-care in a new way. “I listen to my body. When I’m tired I rest, I take the time in the shower to properly feel for lumps and bumps. I try to meditate and stay as stress-free as possible. I eat healthy foods that give me fuel to get through the day. I’m much more in tune with my body since I was diagnosed.”

Looking to the future

This difficult time has given Georgie the opportunity to re-evaluate what’s important, and she tells me that she has new priorities when it comes to how she views her body since the loss of her hair.

“I still have moments when my reflection takes my breath away. Losing my hair made the cancer very real. I look back at pictures of myself with hair all the time. Our wedding photos are on the wall of our hall and I’ll often stop to look at them. I think of how lucky I was to have it and can’t believe I ever gave out about ‘bad hair days’. I will appreciate it like never before when it comes back.” 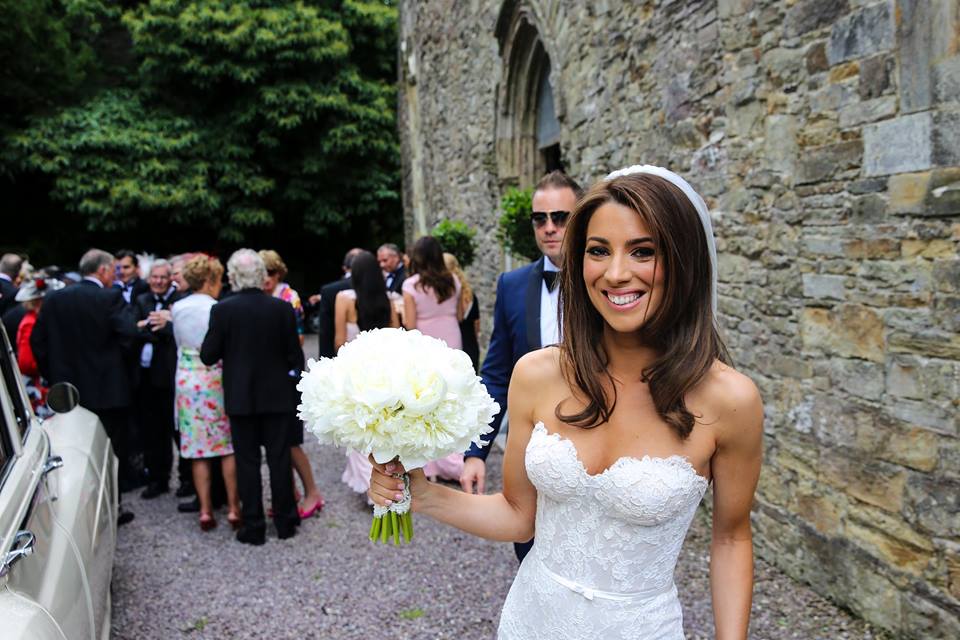 Georgie, on her wedding day

However, she’s moved past the point of feeling like she needs it. “I’ve surprised myself too since losing it. My hair doesn’t define me, all I care about is being a healthy, happy mum. I have a respect for my body now that I never had before and I love it with or without hair.”

Georgie still has a few weeks left of chemotherapy, which will be followed by a long stint of hormone therapy. I finished up by asking her what her advice would be to women starting out on the same journey she began just a few months ago. “My advice would be to take it one day at a time and try to stay focused on the end goal. In relation to losing your hair, it’s very difficult, but it’s temporary. I repeat to myself ‘it’s a small price to pay for my life’ and that helps me daily.”

For more information on breast cancer, visit Cancer.ie or MarieKeating.ie.