If there was ever a phrase more appropriate for this story, it’s that romance never dies. We need a million tissues as we think this is the most heart-warming thing. Probably ever. In what is one of the loveliest things we’ve heard all week, a British couple George Kirby and Doreen Luckie, became the oldest couple in the world to get married. He’s the grand old age of 103 and she’s 91 (they have a combined age of 194 years between them), and after being together for 27 years, they decided to make it official and tie the knot in the UK today.

In front of close friends and family, the happy couple was wed at Eastbourne in the south of England. Doreen said herself and her new husband had “no regrets” about not doing it earlier in their life. “We didn’t want to bother about marriage before but eventually we did it,” she said.

Apparently, the couple has seven children, 15 grandchildren and seven great-grandchildren between them. We’d say it was some wedding reception.

And it gets even sweeter, according to reports; they got engaged on Valentine’s Day this year. George was quoted (adorably) as saying: “I didn’t get down on one knee, because I don’t think I would have been able to get back up!? Aww! We say fair play to them for deciding to make such an important commitment after all their years together. It’s such a positive example to set.

They look so happy in the pictures and even got a shout out from the British Prime Minister just after they got engaged. 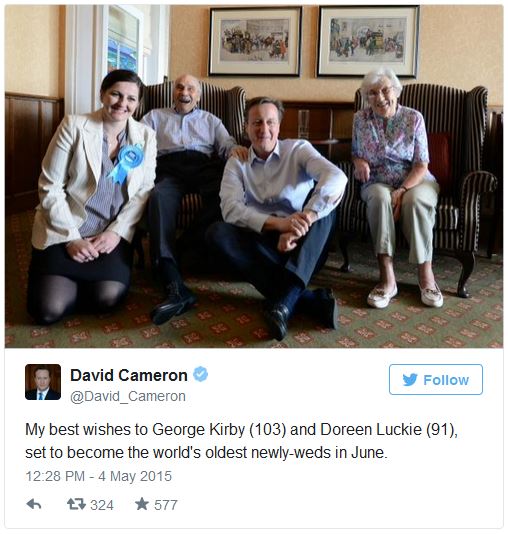 The couple look amazing, we hope we look this good when we reach their age. Here’s hoping they have more years of happiness.