Brides, It’s Not All About You

As a wedding columnist in the Irish Times Saturday Magazine – and someone who’s been to approximately 683 weddings in two years and bridesmaid four times – I’ve often wondered: where was the groom’s voice? Could you pick out the intricate parts of the process that reflected him and/or his tastes? Was it himself who decided on the personalized love-bird salt and pepper shaker favours? Or the cupcake tower over your traditional wedding cake? Well, probably not. ?Ah it’s her day really. Sure all I’ve to do is show up?, one said.

Was BBC3’s Don’t Tell The Bride the only outlet they had to reveal their true wedding identities?

When the column started, females comprised 96% of total respondents??- brides,’sisters, friends, brides pretending to be their sisters or friends. The remaining 4% were photographers and videographers, most of whom are male. Even after a social media call urging the newlywed men of Ireland to come out from under Oyster White thank-you cards and stacks of bubble-wrapped Denby dinnerware to tell their story, they cowered in silence.

Then slowly, something changed and – through nothing I had done because I’d given up – the groom’s voice began to take its rightful place. Which added a little bit of magic to the stories. Maybe it’s because men are skilled at stripping life down to basics. Five months before one pair were married in Portuguese beachside luxury, the bride tearfully flapped that she was tempted to reconsider the whole thing, such was her partner’s inactivity. And how did the prospective groom feel the planning was going? ?Grand, sure everything’s pretty much done.?

Or, maybe it’s because there are few things more annoying than the princess who acts like it’s all about her and whether to have a sit-down lunch or just a casual BBQ for the second day?

For whatever reason, when grooms opened up about the parts of the proposal, planning, wedding day or married life that meant most to them, it was worth listening to. Maybe just because it was different. Life stripped down to the basics.

One of the most-loved stories in the series so far, was from a groom who complied efficiently with the questions put to him through email, giving a broad idea of the day but a little light on detail. At the end he copied in the final paragraph of his speech- ?just in case you’re stuck.? It turned out to be a deeply moving and funny account of how he proposed and the ‘sign? he was anxiously watching out for. It’s the rarely-heard male perspective on the biggest question, the one that is mostly told from the side of the surprised, weeping fianc?e.

Another was asked if he had any wedding morning jitters. He had.?It was whether his burly best man would fit into the tux. ?In my mind, we’d been married 6 months after I met her so I had nothing to be nervous about?. Like another groom, a friend who said afterwards that he ?just couldn’t wait for her to be my wife, I’d have done it just the two of us in a registry office if that got the job done.? 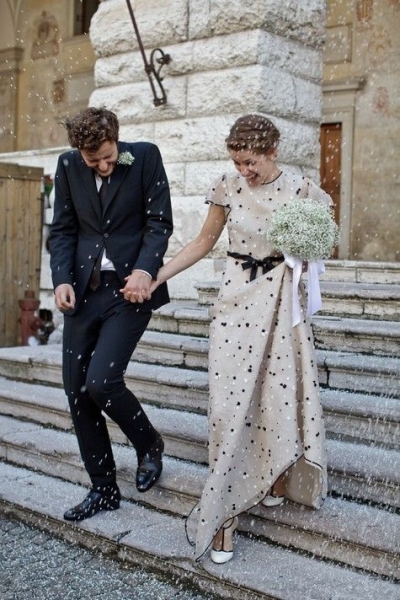 Other surprising reveals? The guest-list is a priority for many grooms because they want to invite everyone they know. Some named the first dance as their least favourite part of the day. ?It’s incredibly awkward?.

More of them are playing a role on the creative side, designing invitations, fashioning ivy into arches at venues, or delegating videography to their mates (careful who you pick for that job, the lad with a pint in one hand and iPhone in the other possibly won’t capture all the special moments you wanted to show your children).

Clearly, Don’t Tell The Bride has some secret note-taking viewers.

Another difference between brides? and grooms? accounts is when asked if there is any change between lives before and after marriage. Brides have said it’s much the same; they’re as happy as before. A few male friends have gone into a surprising amount of detail about how ?it’s different, but good different. You’re definitely aware of a bond that wasn’t there before, that this is now something you have to work hard at.”

Most importantly, what is the groom’s favourite part of the day? Coming out on top every time, is the moment they first catch sight of the bride. So the groom has a lot to say about his wedding day, if only he gets the chance.?And hopefully, after May 22nd, there will be a whole new batch vying to tell their story.