Books To Dive Into: 3 Swimming Memoirs That Are Haunting And Beautiful

Swimming is a sport however sea swimming is closer to a vocation and has inspired a swell of swimming memoirs of late, Sophie White dives in

My father died in May. While it was happening, I never stopped to feel his death. I sat beside him, staring at the fact of his passing as it slowly, painfully, slowly crept over him. He had been dying for three and a half years at that point. You cannot look at that dark thing for three and a half years and keep on feeling it. You simply cannot. It would be like cleaving open a raw wound, day after day. Who can do that? Not me. I thought I was becoming deadened by all the dying. The whole time he was dying, I was birthing and mothering. It was a strange juxtaposition: feeding a dying thing, while tiny, beautiful, dark-eyed strangers were syphoning life from my body.

When he finally died, I was just out of the room filing copy because that is how drowning in denial I was. I walked back into the room to hear the words I had been waiting forever to hear, “he’s gone”. I thought this, at last, would spell relief. Of course that’s not how it works. The first swells of grief that came, felt like the worst, most unbearable guilt relentlessly crashing over me. I’m still caught in this tide of guilt, though now there’s a dragging undercurrent of pure rage too.

Sometime in the following weeks I get the idea that he is in the sea. “Are you here?” I float and try try try to unclench my face. Since he is dead, my face has been in constant pain. My throat is constantly constricted, my jaw is tight, my back teeth are madly clenched. I endlessly swallow down the anxiety that rises like a roiling ocean of oil. My eye sockets are aching from not crying, from never crying and the seized mask of my face feels like an iron maiden.

On New Year’s day some friends and I begin a tradition of swimming in the sea and I uphold it intermittently throughout the year of his death, I notice it’s a bid for some kind of peace. 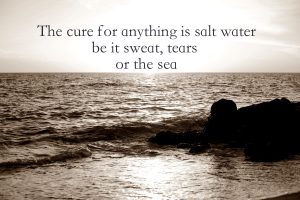 Sea swimming as a medicine for the soul is actually a long-held tradition, and one that is enjoying something of a moment of late. During my year of solace swimming, I read three beautiful swimming memoirs that chronicled the author’s relationship with this almost talismanic pursuit.

Leap In: A Woman, Some Waves, and the Will to Swim – Alexandra Heminsley 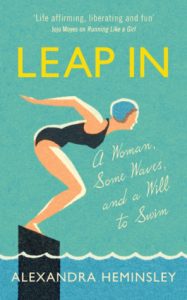 Of the three swimoires I enjoyed last year, journalist and author, Heminsley’s account of going from spluttering swimphobe – her passage on her first encounter with a wetsuit is hilarious and all too familiar – to hardy open sea swimmer (by the end of the book she’ll swim between Greek Islands) is, in many ways, the most instructive. Heminsley’s book takes us from her first shaky outings in Brighton where she lives, to dabbling in wild swimming events and enjoying the historic lidos of London, she also gives a fascinating potted history of women swimming.

Heminsley is no stranger to physical challenges, her first book Run Like A Girl charted her transformation from bar-hopper to marathon runner, however by the time she is preparing to swim in open water in Leap In, she is also steeling her body for a far more complicated challenge, IVF treatment. The later part of the book concerns the “crushing grief” as the treatment ravages her physically and mentally. It is devastating and beautiful.

“(Swimming is) for the scarred, the sick and the sad … I don’t know if we will ever have a child. I don’t know if we have it in us to try IVF again. I just don’t know; just as I never know for sure what swims beneath me as I push myself through open water.”

I Found My Tribe – Ruth Fitzmaurice 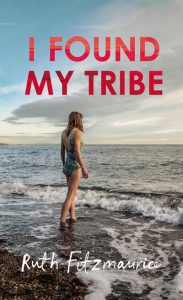 I Found My Tribe is the beautiful and award-winning account of Fitzmaurice’s life after her adored husband (filmmaker Simon Fitzmaurice) is diagnosed with motor neurone disease. Left to care for him while bringing up their five young children and keeping afloat amid the sea of carers and nurses and medical equipment that flood their home, Fitzmaurice turns to swimming with friends who she dubs the “tragic wives’ swimming club” to battle the depression that engulfs her and to come to terms every day with the hard facts of her life.

There is huge passion in Fitzmaurice’s writing, the cove where she swims with her fellow “mermaid goddesses” is bathed in magic and there these stoic women are born again with every moonlit dip and dive right “into the pulse of nature”.

“Like the rolling of the waves, the thrill of the dive, the rush of the cold…this is as free as we can all possibly be.” 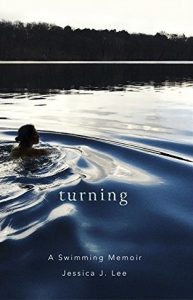 After a turbulent period in her 20s (drugs, a short-lived marriage) Lee takes up wild swimming ostensibly to get to know her adopted home of Germany but also as a means to cope with her depression and disappointment in the vagaries of life in general. In writing the book she resolved to swim in 52 lakes in one year and chronicles this often arduous undertaking – she mostly accessed the lakes under her own steam by train or bike, often grappling with issues like getting lost, or chipping out a path through ice in winter in order to complete her requisite 45 strokes – while also weaving in biographical details with a touch as fluid as her swimming. Her prose is elegant and sharp, and it’s a pleasure to accompany Lee on this journey in search of both solitude and fortitude.
She writes:

“In the stillness of the lakes, the border between nature and culture is thinned. Swimming takes place at this border, as if constantly searching for home. Water is a place in which I don’t belong, but where I find myself nonetheless. Out of my culture, out of my depth.

There is more space inside than I can imagine, more hope and possibility than I’d known. Feeling as clear as the day, as deep as the lake.”

Photo by Anna Wangler on Unsplash