Balancing parenthood with the campaign trail: ‘Nobody would have asked my husband about his paternity leave’

Father or mother, being a parent in politics is a challenge — the personal scrutiny and long hours make it one of the most un-family friendly professions. As our candidates hit the campaign trail, Amanda Cassidy caught up with those trying it make it home for bedtime.

“Sorry, it’s chaos,” laughs brand new mum Catherine as we get interrupted by her own mother arriving to help out with her newborn twin boys. Sean and Darragh, wrinkled and dimpled, are just four weeks old. Born premature, on the 29th December, they are now thriving, having put on about 2/3 lbs.

“We feel really fortunate that they are healthy and well,” the proud mum points out. “But the timing wasn’t ideal.”

Unlike many other new mums who’ve been up all night feeding twins, Catherine, who happens to be Senator Catherine Ardagh, instead has to pull on her work attire and go out canvassing for the upcoming general election.

I ask her about a typical day at the moment trying to balance babies with canvassing. “Basically I can’t do as much as I used to. There are usually three shifts when it comes to going out talking to our constituents: 11 am, 3 pm and 6 pm. I’m currently making one or two, sometimes three a day. If there are other things on, it is very hard, if my babysitter lets me down for example. Ultimately, I’m just trying to get on with it.”

Having a baby (or two) tends to focus the mind, and Senator Ardagh says childcare is something that she recognises needs more attention. “We are relying on grannies at the moment. That’s not sustainable. Obviously, they are so little, it is hard to leave them and there are no baby rooms available in creches. It is impossible to get a place. Even if you do, it is over a thousand euro per child every month. It is very hard for families.”

We have to accept that as women, we have a different role in producing children

I ask her about the criticism levelled at her on social media. In a recent interview with Susan Keogh on Newstalk, Ardagh says she gets the odd negative comment about her choices. “Out of 100 comments, I might get five negative where people are like ‘you should be home with your children’. Ultimately I think people are very supportive.” 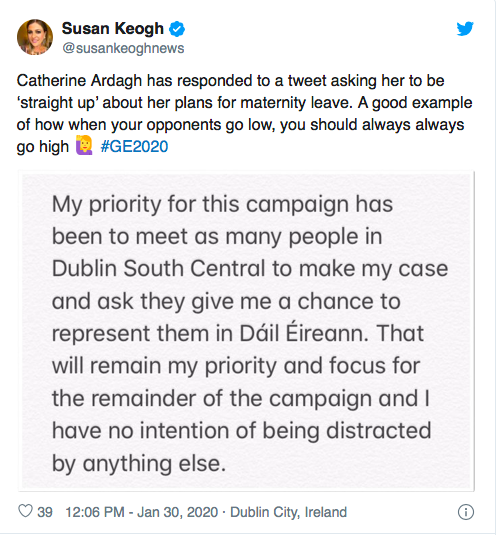 A recent tweet asking her to spell out her plans for maternity leave left her feeling frustrated. “Nobody would have asked my husband about his paternity leave or if he was planning to give up his job but things are different. I have given birth – we have to accept that as women, we have a different role in producing children. We are physically different.

“Thankfully we have legislation to protect women and pregnancy with maternity leave, breastfeeding rights, etc. But we need to go further in the realm of politics.”

For the first time ever, this general election will see a woman running in every Dail constituency. Good news for elevating women in a typically-male dominated career but Ciarin de Buis, CEO of Women for Election says there are still massive barriers to women entering politics and being a parent is one of them.

“Childcare should technically be as much as a barrier for men but it isn’t. If you are out canvassing it is every evening, early mornings, leaflet drops, you are on call to your constituents pretty much all the time.

“The other less talked about barrier is confidence. Many women are wonderfully equipped for life in politics but they don’t have the confidence to put themselves forward.”

There have always been discussions about the challenges of being a woman in politics – long hours, the scrutiny of your private life, but balancing parenthood with politics is a juggle no matter your gender.

Aodhán Ó Ríordáin is a first-time father to a toddler. He told us he prefers not to speak about his family life. But there are plenty of Dail dads that also have to work hard to find that balance between family-time and politics.

Labour councillor, Deirdre Kingston said she shouldn’t have had to choose between having a baby or being a national politician. She stepped back from politics when she got pregnant last April. Now, mum to two small children, she says there is more of a burden of care on women which has a knock-on effect in encouraging women into politics.

“I had to reassess when I found out I was pregnant. I knew how hard it was going to be to balance it. Even physically walking around for hours would have been a challenge. The crunch point was knowing I’d have to give up any maternity leave I’d have if I got elected. TDs don’t get formal maternity leave. It is a basic right in every other job. A woman needs maternity leave to recover from childbirth. That’s the reality of it.”

Kingston says a lot of work needs to be done to address the family-unfriendly bias. “Look at the Scottish parliament — they are making changes to allow women to feel supported in politics. Extending maternity leave can set the tone and send the message ‘we want you in politics and we will support you in whatever choice you make in terms of your family’ — especially if, like me, you are breastfeeding.”

The solution, most agree, might actually be less about gender and more about the unfamily-friendly nature of political life. And that’s something both Ardagh and Kingston would like to see addressed as a priority.

“We need to do a lot more,” says Ardagh, as she gets ready to kiss her babies goodbye to go canvassing. “Voting hours are very late at night. A lot of committee work is done during the day. It just doesn’t make sense to do it at night when both women and men need to be at home with their families.”

The jump from one to two children: “I was afraid I’d used up all my love on our first baby”