#IMAGEReads: ‘For rape culture to shift we MUST speak out as victims’

The book guaranteed to be your next page-turning summer read is Juno Dawson’s latest novel, the compulsive ‘Meat Market.’

It tells the tale of Jana Novak, who is catapulted to superstardom when she’s scouted by a model agency. She lives an ordinary life, teased for being too tall and too thin before she’s scouted by a top modelling agency. Her world turns upside down. But the fashion industry isn’t all glamour; hidden underneath the sheen of glossy billboards and the promise of a new life is the grimness of it all. Then one day she stumbles from a shoot into a lift, not comprehending what has happened. Or why it happened. Honest, raw, this timely exposé is essential post-#MeToo reading. Author Juno Dawson spoke to Jennifer McShane about writing the inspiration for the book, #TimesUp and how social media skews our sense of self.

Tell me about the process of writing the book pre-#MeToo – how does it resonate differently since the Weinstein scandal broke?

I was ready to quit the novel before the Weinstein scandal broke, to be honest. I was finding all so unpleasant: to create a wonderful protagonist with the knowledge I was about to put her through an ordeal. I suppose that’s the point isn’t – no victim of sexual assault has a choice but we don’t normally have foresight and it wasn’t fun.

Then, as the #MeToo movement started I realised that Jana wasn’t alone and that for rape culture to shift we MUST speak out as victims. Silence buys power for abusers. So that was the kick up the bum I needed to finish Jana’s story.

When did you realise you wanted to write ‘Meat Market’?

It had been brewing for a really long time. Even when I was a teacher, an eleven-year-old girl in my class had been approached by a scout and I filed that away. I also wanted to explore my relationship with fashion – had I been in any way complicit? By deifying brands and personalities was I making things worse.

In what way do you think the dark sides of the fashion industry are getting worse thanks to social media?

I think Instagram does skew body image. I mean, Facetune is terrifying. I think it takes a very switched on woman to curate her Instagram experience to ensure she’s seeing lots of different types of body. It’s so constant too – we’re bombarded by advertising more than ever. I do see some glimmers of hope via the body positivity movement as well. I think the answer is to discuss social media, body image and consent at schools. Drop one maths lesson a week in favour of PSHE. I’ve been saying it for years and I won’t stop.

What do you think the biggest misconception still is when it comes to the world of modelling?

I think the myth that it’s well paid! I took some creative licence in making Jana an overnight success. Most models are skint and in debt to their agencies.

What was your favourite part of writing the book?

I really enjoyed the characters! Obviously, fashion has some wild people and I got to create these almost Dickensian grotesques. I’m also very fond of Jana’s relationship with her boyfriend. Having looked at quite toxic relationships in my last novel, I wanted to demonstrate to my younger readers what a healthy relationship should look like.

What is the allure of the fashion world for young women in 2019? Is it to do with “being famous” for fame’s sake?

I blame Simon Cowell. No really. I think a generation has been told that success and glory come overnight, after singing acapella for 30 seconds. They don’t show the years at stage school. I think there’s something seductive about the notion that you don’t have to do or work for success. It’s boll**ks too – models work extraordinarily hard in challenging conditions.

What do you hope people take away from the book?

I hope women, especially young women, recognise how powerful they are. We all have a voice. If men like Weinstein can be brought down, any man can be. We have more power than we think we do. 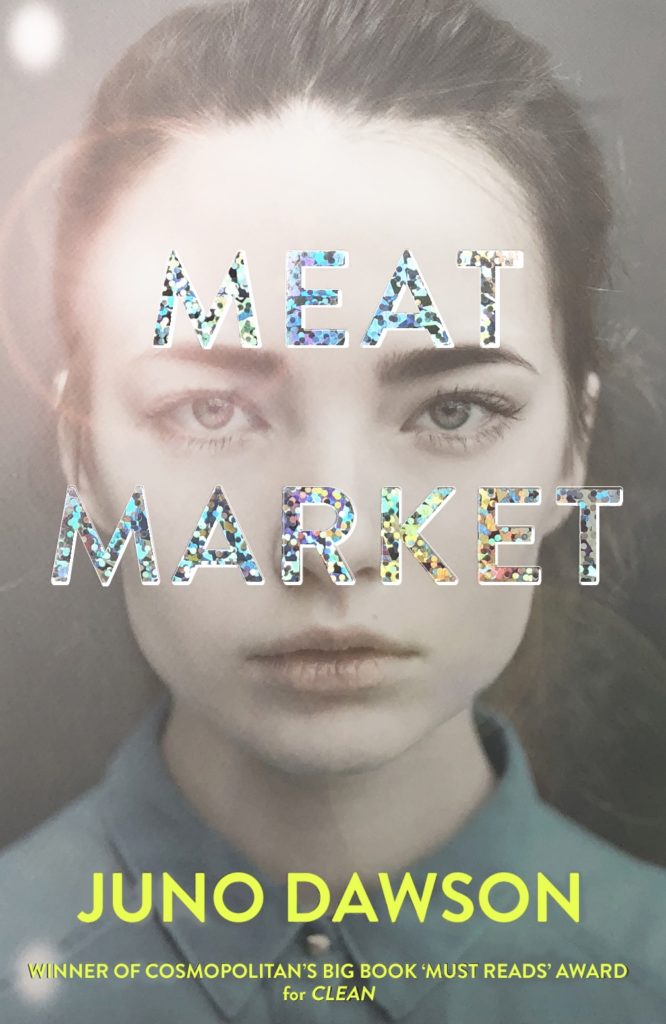 Meat Market by Juno Dawson is out now, published by Quercus