Art is dead: Free content is killing creativity but maybe there’s a solution

The rise of community-funded creative work is slow to hit our shores and some early adopters have faced criticism, Sophie White reports

The first time I encountered the idea of cyber patronage was about a year or so ago. I’d signed up to receive a serialised novel, a new instalment of which dropped into my inbox every week. The compensation for this work was the price of a coffee which I paid through a platform called Ko-fi. The set up intrigued me at first, which in turn gave me pause – why should it feel odd paying for something that I am enjoying that another person produced? Of course, this notion of paying for something is something of an antiquated one now. After years of free content of every description available at the swipe of an index finger, it does somehow feel off to pay for it.

All this free content has been a growing and gnawing concern for everybody who cares about art and its creators. In two decades, since the dawn of downloading and streaming, entire industries have practically been dismantled by the sharing ethos.

Perhaps we can blame Napster (it feels kind of good to have someone to blame, doesn’t it?) which kickstarted the new age of free distribution back in the 90s, pirating music and spawning a new generation of “fans” who couldn’t fathom owning CDs and actually paying for music. Streaming services like Spotify have replaced Napster and largely supplanted illegal downloading but in terms of a business model, the service is still shambolic with artists often earning less than a penny per play. This is usually generated by ad revenue rather than the consumers – though some services charge a nominal fee. This still isn’t quite curing us of our sense of entitlement when it comes to consuming other people’s work for free. Given that of all the breeds of aficionado, the music-lover is arguably the most devoted – it would be funny, if it weren’t so depressing. My dad was one such fan(atic). He bought a small stack of new CDs every single week. If he’d been around to see consumers moaning about the price of their Netflix subscription and the ads on Spotify when, for a tiny sum, they had some of the best art created in that last fifty years IN THEIR POCKETS, he would’ve been apoplectic.

Unfortunately, free art has devalued the work for us, the audience. What we so desperately need is a shift in attitude. The ecosystem of creativity is a fragile thing. For many, art is seen as an indulgence for a society – something to be enjoyed if all the “real” work is taken care of – rather than as a vital aspect of every well-functioning society. To undervalue our artists is a really despicable thing. Even consider the very recent example of what artists achieved in the campaign to repeal the 8th amendment, in an interesting reversal, the production of art and fashion were funding much of the campaign and output from creatives like Maser’s mural was a visceral reminder of just how essential art is to a community.

The rise of free exchange of content on the internet with the introduction of the Creative Commons license in the early 2000s also contributed to these knotty issues around valuing producers. The founder of Ko-fi describes working with an online creator in 2012 and wishing he had a simple way to compensate him. The only option was to ‘like’ the creator’s content which felt impersonal, and a bit like paying lip serve rather than actually offering a useful return for the creator’s hard work. “If only I could buy them a coffee,” he thought and the idea for Ko-fi was born.

The following year, Jack Conte and Sam Yam created Patreon, a platform popular among writers, podcasters and illustrators for fans of their work to make a monthly contribution of upwards of $1 or as one Irish blogger, Sarah Hanrahan puts it “the equivalent of buying me a drink at the end of the year as a ‘thank you’ for creating [events posts] every week.” Hanrahan runs the enormously popular lifestyle blog, I Come Undone and puts a lot of work into creating a roster of consistent, quality content which demands a lot of time and research. Her Dublin event guide has a huge following and she has thus far been scrupulous about never featuring events in exchange for compensation.

“I do feel weird asking for this, I’m not going to lie,” says Hanrahan. But we do pay for other content we consume…we pay for the cinema, we pay for Netflix. This is valuable content if you use it.”

Hanrahan’s tone suggests she feels some degree of reticence about asking her followers for support. It’s not hard to see why. When blogger Rosemary MacCabe set up her Patreon and asked people to consider supporting her output she immediately received criticism. 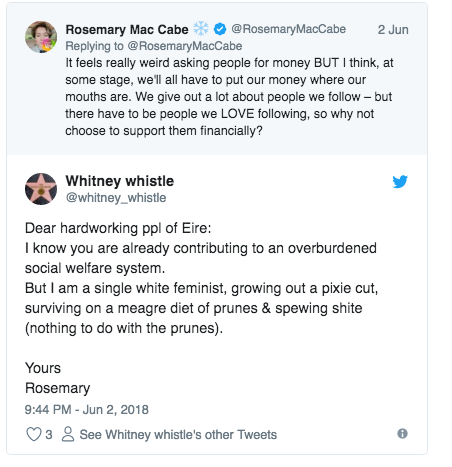 Is it the old Irish begrudgery at it again? MacCabe feels that there’s a vast difference in attitudes in Ireland versus those in the US in terms of what people perceive to be asking for handouts.

“Over there, they have a more supportive attitude to the gig economy and are more likely to think ‘she’s making a go of it and I like what she does so I’m happy to support her.’ Whereas here people are like ‘get a real job’.”

“It’s a cultural disregard for the arts,” says MacCabe who recalls the reaction when her sister, now a fashion designer, announced she was going to study art after receiving 500 points in the Leaving Cert. “People were like ‘what a waste!'”

“We don’t see creativity as being work, it’s seen as being fun. Get a real job and paint on the side!”

Second Captains and Blindboy Boatclub, who have, respectively, 10,000 and 3,000 patrons, are two examples of Irish producers who are successfully earning using the Patreon model, apparently without the side dish of negativity.

“The tweet (above) was an extreme example,” says MacCabe. “But I do suspect that a lot of people think like this.”

“Someone else said, ‘are you actually saying you want us to pay for your blog posts now?’ and I thought ‘I don’t know why that idea is so strange to you’. It’s because we are so used to getting everything for free now,” says MacCabe.

Amanda Palmer, lead singer of the Dresden Dolls, gave her 2013 TedTalk about the art of asking, describing how she made all her music free online and then crowdfunded her next project to the tune of $1.2 million (the original goal was $100,000). She went on to receive a tsunami of criticism for exploiting her fans. However, if the campaign’s supporters feel they are engaged in an exchange with Palmer, where’s the harm? They are free to opt in and opt out.

“The media asked, “Amanda, the music business is tanking and you encourage piracy. How did you make all these people pay for music?” And the real answer is, I didn’t make them. I asked them.”

It feels like the pressing issue is the need to change our attitudes as consumers, we need to want to compensate the creative people who make the work we enjoy. We need to be proud of paying for our media. Pay the subscription fee, pay the $1 Wikipedia has been begging you for. Or simply shout someone a coffee for a blog post you enjoyed.

To support any of the creatives mentioned above visit Patreon and search their names.

Photo by GoaShape on Unsplash