Apple has upped their equality stakes by adding a?new female athlete emoji collection, right in time for the 2016 Olympics when women will be almost equally represented at the event as men; an estimated 45 percent of competitors in Rio de Janeiro will be female.

Earlier this year, Unicode, which develops emojis for Apple, were called out for the lack of female athlete emojis?and?of the options for female emojis in general, which are largely limited to activities like getting a haircut, dancing, and getting married. There’s nothing wrong with any of these of course, though the question remained as to why Apple had solely given the female emojis those activities. It’s, well, limiting, to say the least.

The new emoji lineup includes women of different races engaging in various athletic activities, including weightlifting, running, surfing, and playing basketball. And the diversification won’t be limited to sports; the new emojis have been created to feature women in a wider variety of professions, including construction and detective work (which is already looking like our new favourite emoji). They’ve also created emojis to represent a diverse range of people, such as single-parent families as well as the addition of a gay pride flag, all of which will be in September’s iOS software update. 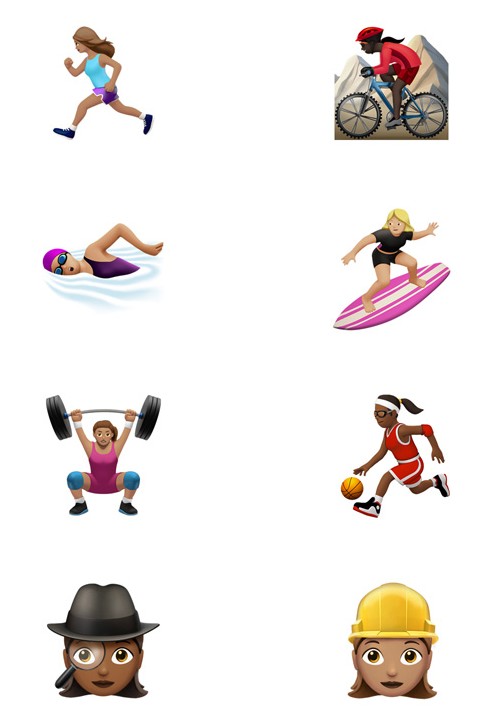 It’s refreshing to see that Apple is taking small steps to end stereotypes and champion diversity as there’s little doubting the power and impact that social media has on real life events. Last week, Twitter made firm its stance on hate speech versus free speech. The real-time platform banned Milo Yiannopoulos, a right-wing tech writer, for his extremist tweets and trolling campaigns, specifically directed at Ghostbusters star, Leslie Jones. Following this, Instagram announced they were working on a new function that would enable users to ban or block those who filled their photo comment sections with abusive comments.

We use it as a?tool for interaction, debate and commentary but even’the lighter sides such as an emoji can carry weight and meaning. If one of the biggest, most influential companies in the world doesn’t positively endorse equality (even in a minor way), how can others be criticised for doing the same or hope to break the cycle? Tiny steps can lead to bigger things. And we need those bigger things: a UK survey recently revealed that one in three girls aged 11-16 say they do not have the same choices as boys in school sport.

It was also announced that iPhone owners are losing their right to bear (emoji) arms. Apple will remove?the revolver emoji (and replace it with a water gun) following the recent gun violence atrocities across?the United States.

Given that social media’s influence transcends the virtual world, the major platforms and specifically, the people curating them, have a responsibility that goes beyond promoting freedom of speech; they have a duty to make sure as Apple, Twitter and Instagram are all currently doing, not only to champion diversity and reduce stereotypes (social media is used by people everywhere, after all) but to ensure that any platform is not used to cause harm to others – yes, even by the use of something as trivial as a gun emoji.

Social media as a whole is taking diverse steps at the moment to stop online hate, show respect to its users and champion equality.