Amanda Knox and the strange saga of her wedding donation request

The name Amanda Knox might only be familiar to those who have watched her Netflix documentary. It’s a strange thing to take in, primarily because the whole thing feels like it should be a movie, but it occurred in real life. At the heart of it, a young woman, British national Meredith Kercher, was brutally murdered and Knox was caught in the middle. Knox has always maintained her innocence; she was a naive student abroad who became trapped in an endless nightmare.

And even though she was acquitted in Italy in 2015, there are still those who say the outcome should have gone another way. The case still causes debate and regardless of which side of the fence you sit, Knox was never going to be let off the hook.

Those who said she was wronged also said she asked for it, her behaviour and demeanour in court doing her no favours. The other side says a cold-blooded killer got off. She was never given a fair trial, that is without question. It was a trial by media.

Is it a surprise that she has been depicted a similar way when news of her upcoming nuptials was announced?  To be fair, the whole story had an odd edge to it: multiple outlets reported that Knox and her fiancé, a writer named Chris Robinson, are crowdsourcing funds for their space-themed wedding. It spread like wildfire and there was no mistaking the sneer in much of the news pieces, “she wants YOU to pay for her wedding!” the headlines shouted. Code for: Who does she think she is? The couple were accused of “mooching,” capitalising on Knox’s fame. 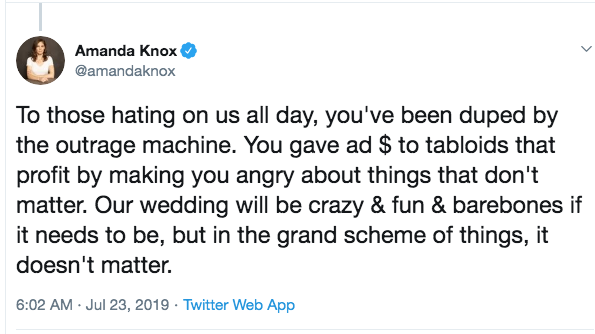 Knox now says that her wedding registry site, is not an attempt at crowdfunding the nuptials set for Leap Day, February 29, 2020.

“I did not put it out there expecting to get a dime from anyone,” Knox told ABC. “Our wedding registry was never meant to be a crowdfunding source. It was meant for our family and friends and any well-wishers that I have.”

“I have a lot of haters in this world but I have a lot of family friends and supporters as well. I wanted to share with them this fun, creative idea.” Knox insists there was a mix-up; the narrative twisted by the press and that they were simply asking their family and friends to donate to the cost of the wedding in lieu of buying them presents.

“This is a deliberate misinterpretation,” she told thestranger.com.

“Whatever I do in the world, the tabloids spin it in the most sensational way possible. They’ve decided I’m the resident villain, and they make news out of something that is not news when there are things in the world really worth getting outraged about. They don’t do any research. They just take a headline and recycle it.”

“I always anticipate that there is a strong contingent of people out there who are going to view everything I do in the worst possible light, and the tabloids are always going to view things in the worst possible light,” she said. “They’ve always reliably done that. But crazily enough, I admit that I did not anticipate the amount of vitriol. I should have.”

Scandalous to ask for cash donations instead of an actual gift? Stranger things have been asked by couples to be sure, but Knox it seems is just asking outright what most newlyweds do with cash they receive – use it to pay off at least some of the expense of a wedding.

“Let’s face it, we don’t need any more stuff. So please, no gifts, and no pressure,” the couple writes on the registry. “But if you feel so inclined, we welcome help putting on the best party ever for our family and friends! Instead of a traditional registry, we’re accepting donations towards the cost of the wedding.”

Though many have asked why she would put the call on her public platforms if it was a personal matter.

Much like the frenzy that surrounded her trial, this too leaves us with a few questions.