No repro fee 5-2-2019 **Aer Lingus partners with the Irish Girl Guides to encourage more girls to consider careers as pilots and engineers** Picture show from left First Officer Rachel Passmore;and Sarah Cassidy (9) (Brownie); at the announcement that Aer Lingus has partnered with the Irish Girl Guides to create the ‘Aviation Badge’, which aims to engage girls from a young age with the aviation sector, by building an interest and foundation for future study in STEM subjects and encouraging them to consider future careers in the aviation industry. To earn an Aviation Badge, girls will be challenged to research the pilot profession, including what education and skills are required, put their engineering skills to the test by creating their own aircraft experiments and challenge them to think of things that fly and how. Irish Girl Guides has approximately 12,000 members in Ireland and the partnership will introduce Ladybirds (aged 5 – 7), Brownies (aged 7 -10), and Guides (aged 10-14) to aviation. Aer Lingus has a strong track record of supporting female pilots: it was the first airline in Europe to employ a female pilot, and currently, employs twice as many female pilots when compared with the international airline industry average.Pic:Naoise Culhane-no fee

Aer Lingus has partnered with the Irish Girl Guides to create the ‘Aviation Badge’, which aims to encourage more young girls to consider careers as pilots and engineers.

The ‘Aviation Badge’ will provide a structured introduction and guide to aviation for young girls from ages five to 14. With 12,000 Girl Guides in Ireland, there will be a badge for each level. These levels include Ladybird (aged five to seven), Brownies (aged seven to 10) and Guides (aged 10-14).

Each stage of the program which will be made age appropriate. Ladybirds will colour in pictures of aircraft and make an object that flies, whether that be a paper aeroplane or a kite. Brownies will research the different types of careers that are linked with aviation and air travel and discover more about women in the industry who have innovated the landscape.

Girl Guides will study the pilot profession, including the education that is needed and the skills that are required. They will also get a taste of what engineering is like as a career by creating their own aircraft experiments and study the why and how behind aviation.

Aer Lingus is a pioneer in supporting women female pilots. The airline was the first in Europe to employ a female pilot and at this current time, employs twice the amount of female pilots in comparison to its international counterparts. 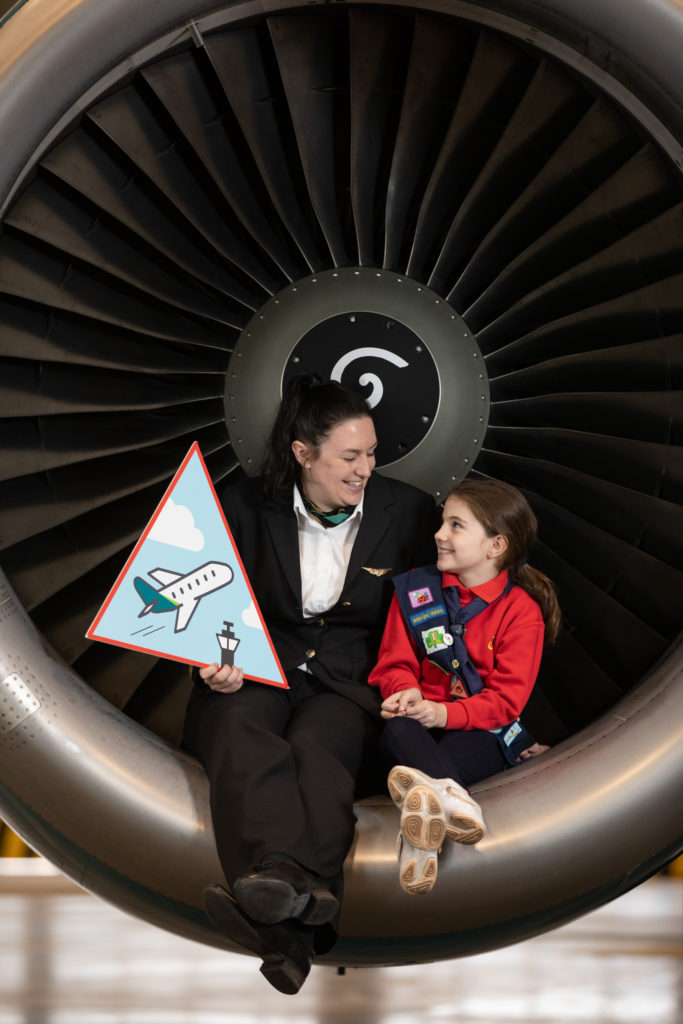 Through both the Future Pilot Programme and Apprenticeship Scheme, there is now a concerted effort to employ more women in an industry that was traditionally male-dominated.

Brian Bowden, Chief People Officer for Aer Lingus said: “Aer Lingus is committed to employing a greater number of women in technology roles that have traditionally been seen as male-dominated. We want to encourage girls to study STEM (science, technology, engineering and maths) subjects and consider aviation.

Just over 5 per cent of airline pilots worldwide are female and only 16 per cent of engineering graduates in Ireland are female. Only by encouraging greater female interest and applications to these roles can we address the gender imbalance.”

Helen Concannon, Chief Commissioner for the Irish Girl Guides believes young girls need to aim high and ignore the stereotypes saying “Our programme develops their confidence and self-belief that they can be anything they want to be.”