ABGC Architects were enlisted to transform a large white box into a functional living space for two design-minded homeowners.

When Nathalie Weadick and Carla Killeen bought their two-storey, brick-fronted, mid-terraced home in Rialto, it already had plenty space, but the extension just wasn’t working.

“It was a simple large white box, with good light and structure,” explains Nathalie. “Our focus was the interior, there was zero design present and it didn’t function well as a kitchen or a dining area. On the plus side, it was a total blank canvas for us to work on. We had to rearrange the space to create a sense of equilibrium and joy. ” 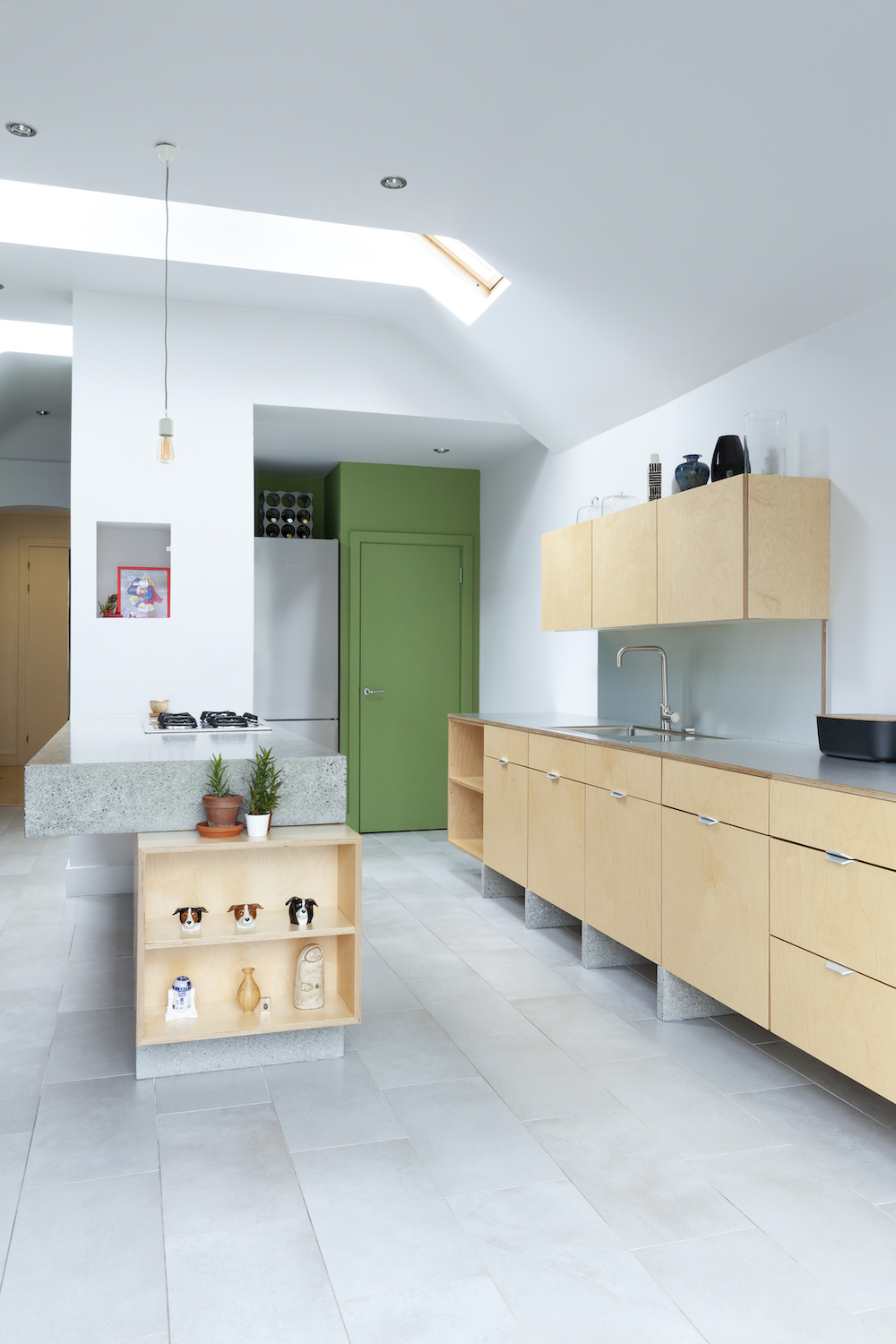 The pair enlisted ABGC architects, friends of Carla, who revised the internal layout, bringing a corner kitchen into the centre of the room, and who added a utility, pantry, downstairs WC and a recess for the fridge to sit in within a green painted box structure. “Knowing and getting on with ABGC was a plus,” says Nathalie. “I wanted to enjoy the process and I knew I would with them.”

The couple’s brief was to create a space for cooking and hanging out, using minimal materials, plus adding a downstairs WC, all while leaving a lot of wall space for hanging their graphic art. Also, Nathalie says she is “a big fan of plywood and concrete”, so those materials were central to the brief from the off too. 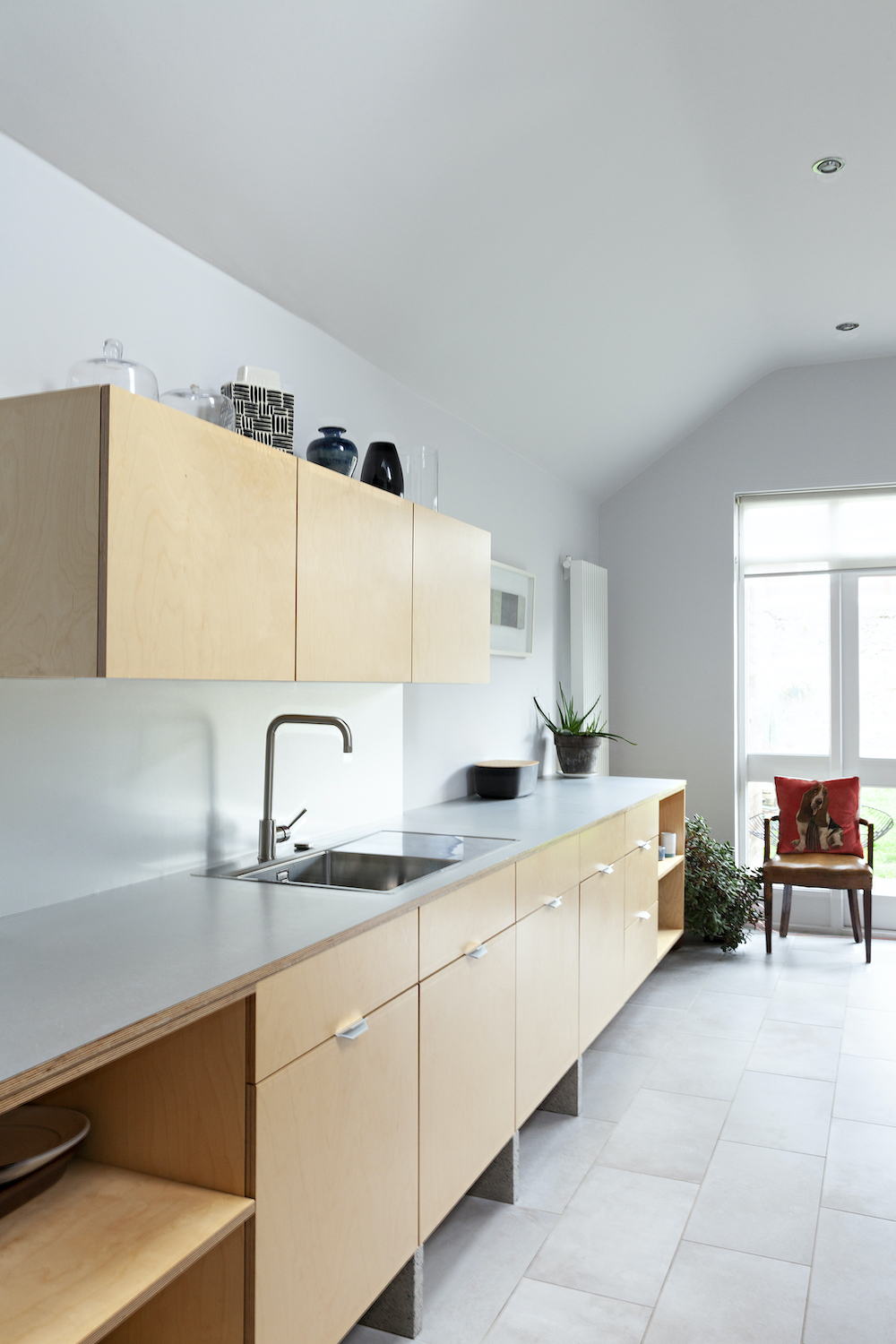 Part of the inspiration behind the kitchen were  traditional Irish dressers that architect Gearóid Carvill saw in the National Museum, some years ago. “I’ve been thinking of them every time I’ve done a kitchen. Their expression of cabinetry is so different to the norm that we think kitchens should look like, which is these big blocks with kicker boards, side panels and dusty places on top.

“Back in the day, people would keep everything, including chickens, in one singular piece of furniture and it wasn’t hung off the wall. In fact, you could carry it out the front door should something happen.” 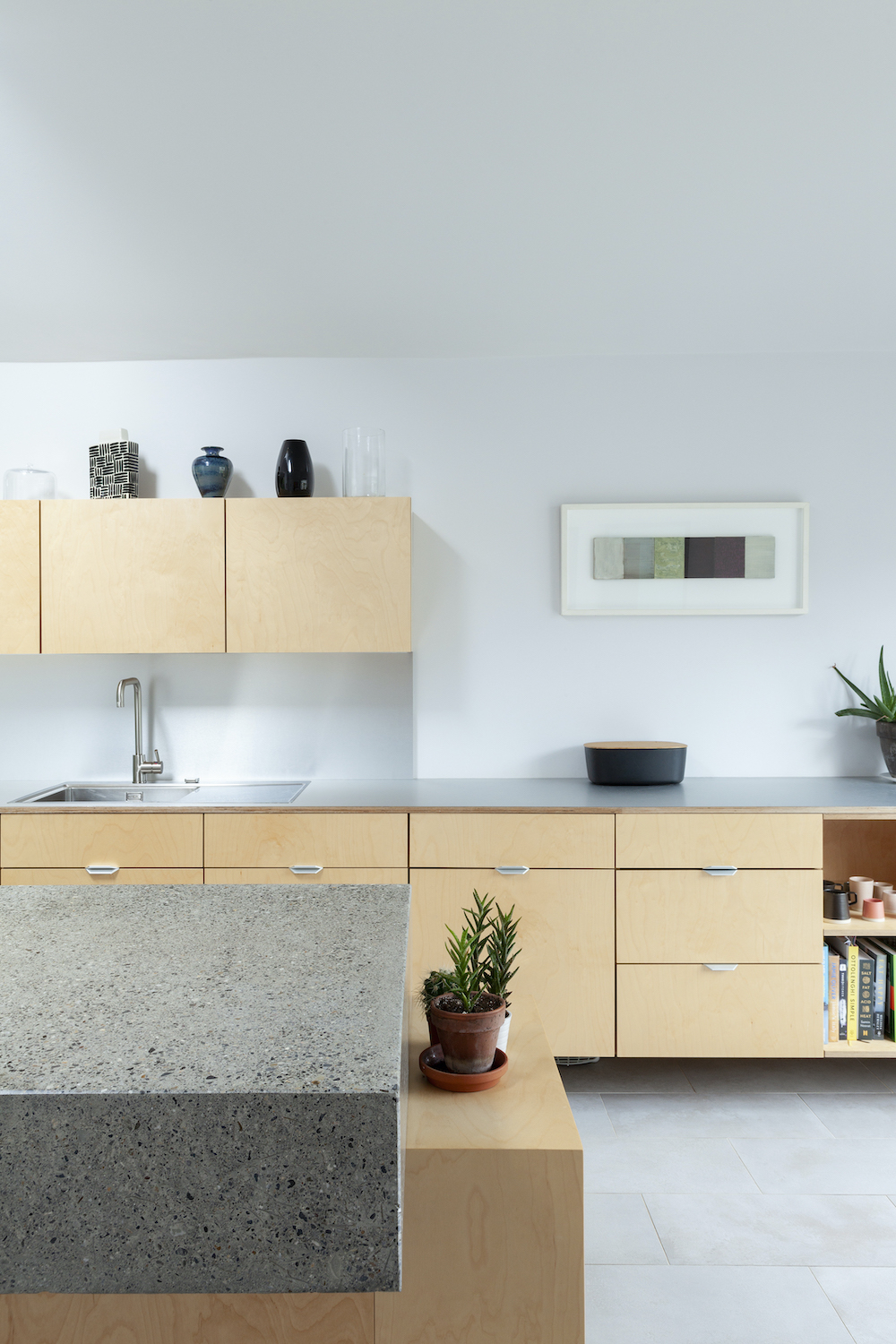 ABGC worked with Mike Ryan of Lyshna Design on the concrete and Peter Brennan of Handcraft Furnishings on the cabinetry. “They’re both very good and exact,” says Gearóid.

“They’re real craftsmen, with an in-depth knowledge of their materials and know how far we can push things. They are designers too, and when they give feedback on a design, it’s never to make things easier for themselves, which is sometimes the case with joinery companies. They are just lovely to work with.” 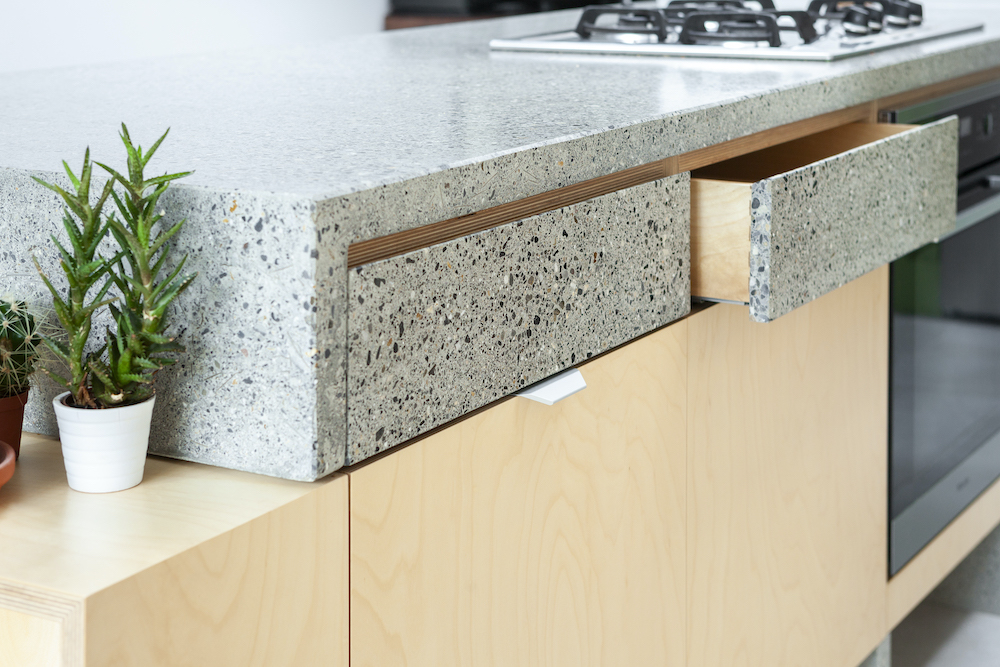 With a concrete counter and drawer units on the island, an overhang for the breakfast bar and a cutout for the hob, both Mike and Peter needed to work together closely. It wasn’t a case of simply cutting stone once the cabinets were finished. 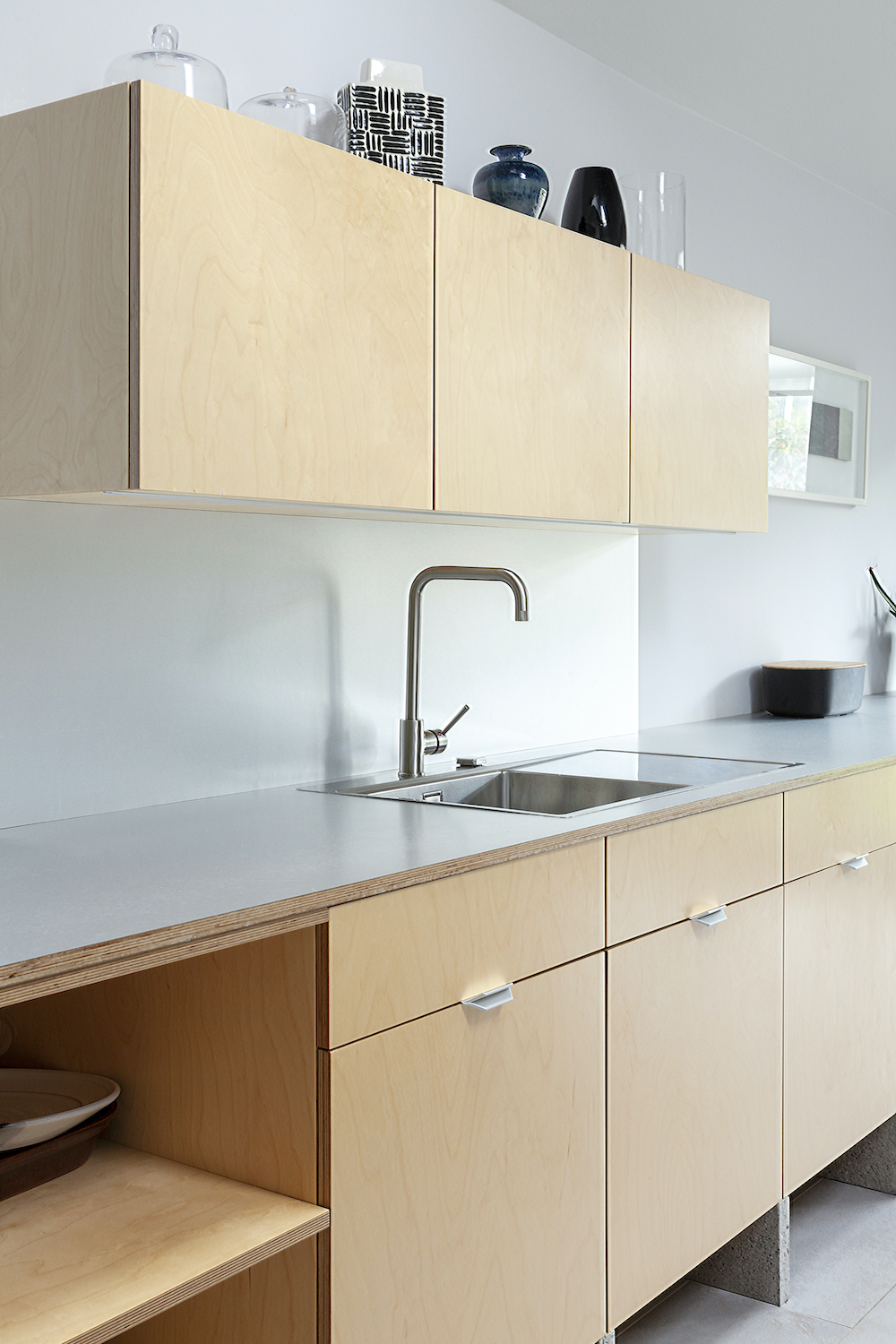 On the dresser, the counter is aluminum formica, with concrete sleepers, and birch ply wood. “Birch ply is a great way to get warmth in”, says Gearóid. “It’s got grain, it’s got life, it’s dimensionally-stable… it’s just a great material to work with, but it needs something else to give it a bit of intelligence.”

If you’ve bought a house with an existing extension, Gearóid says he would look at three bits of information first: the surveyor’s condition report, the BER report, and that he’d assess what’s there from a spatial point of view. 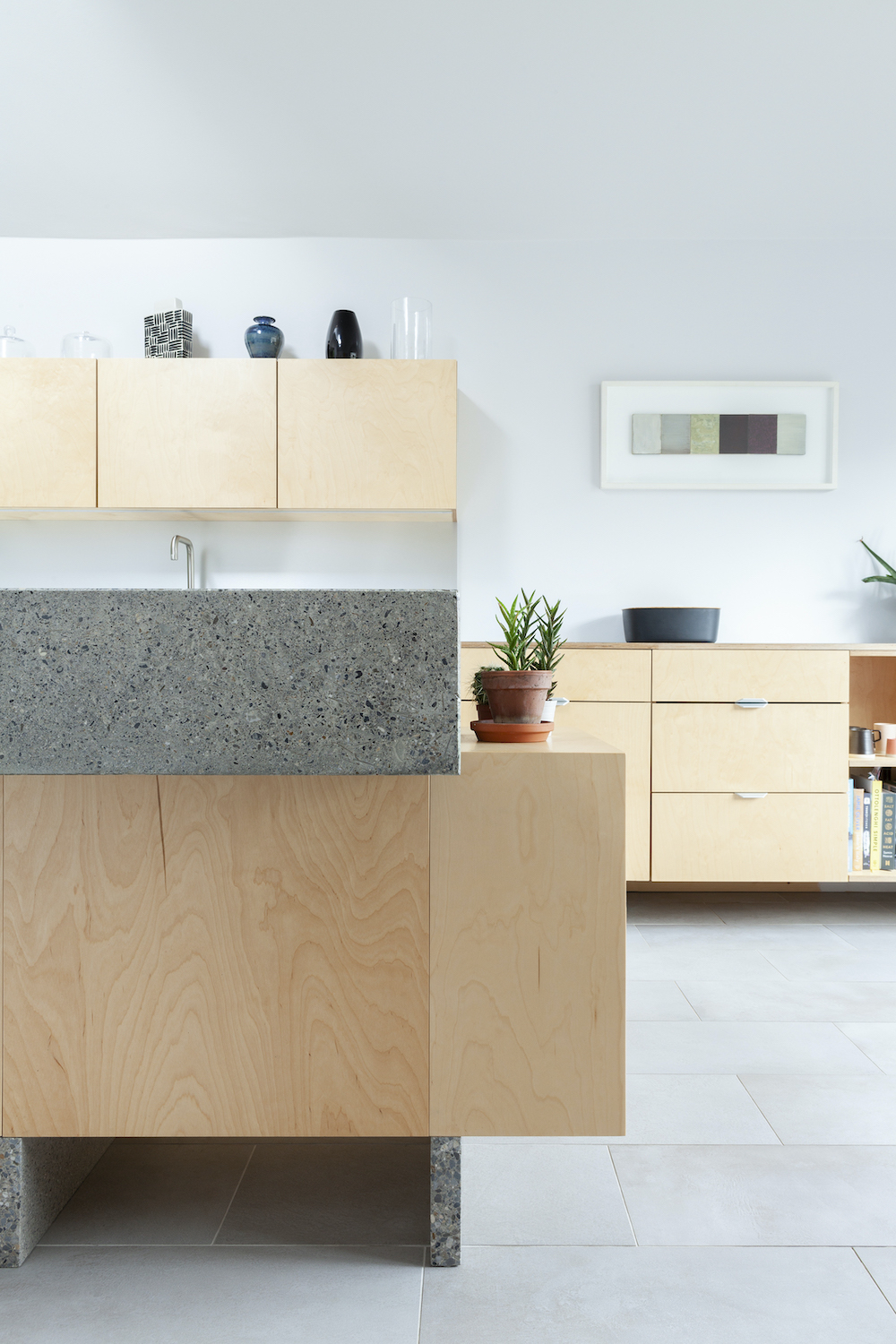 “Knocking down things and rebuilding things isn’t cheap, if you can work with what’s there, it’s golden. We’ve done a number of houses over the years, where the space hasn’t gotten bigger, in fact with some houses, it’s gotten smaller – like my own house – but it’s configured and works well.”

That certainly seems to be the case here. “Even on a dullish day, the space is so bright, and particularly during lockdown, it was a pleasant place to work and hang out,” says Nathalie. And the redesign wasn’t disruptive at all. “We managed even with our two Jack Russells. I loved coming home to see the daily progress. It was so exciting.”

Next up, the couple are working with ABGC on replacing the back doors. “We have to do something with the French doors from the kitchen into the garden. I would love to create a wall of glass with a large door that can open on a warm day.”