‘A perfect base for soup or stew’: Why a cup of bone broth is ideal for winter

Cold mornings, rainy afternoons; it’s autumn weather. The season when soups and stews are what we consume in droves. But in case you think a liquid can’t pack a nutritional punch (and taste delicious to boot) you obviously haven’t tried it for yourself.  To that end, a multi-award-winning Irish company has just launched a new addition to its innovative bone broth products. Founder Sarah explained a little more about it – and highlighted what exactly bone broth can be used for day-to-day

We pride ourselves on supporting Irish startups and when it comes to a product like bone broth, Sadie’s Kitchen will be a name that is familiar to many. The idea of bone broth isn’t a new one but this small business found unique a way it could quickly and easily be prepared at home (theirs is the first brand in Ireland and Europe to bring bone broth to the masses). Their Comforting Chicken Bone Broth is  a staple but they’ve also added a new flavour – Boosting Beef Bone Broth – alongside it.

“It’s been two years in the making,” explained founder Sarah Kiely. “We decided to launch a beef recipe alongside our chicken, but the formulation took time to get right; it was a real challenge to get it right for an Irish palate. We wanted a broth that not only had a generous collagen content as our chicken broth has but we also wanted a product that had a protein punch in it. We’re really proud that each pack contains 11 grams and that all our produce used to create it is 100 per cent Irish.”

This particular beef bone broth is produced using only the finest grass-fed beef from Irish farms. Fully traceable and fully tasty, it’s slow-cooked for 24 hours to release the maximum gelatine and the very best flavour profile. Not only that, each pack contains just 84 calories and an impressive 11 grams of protein (and as a nice addition, the packaging is made using fully recyclable FSC-approved sleeves). 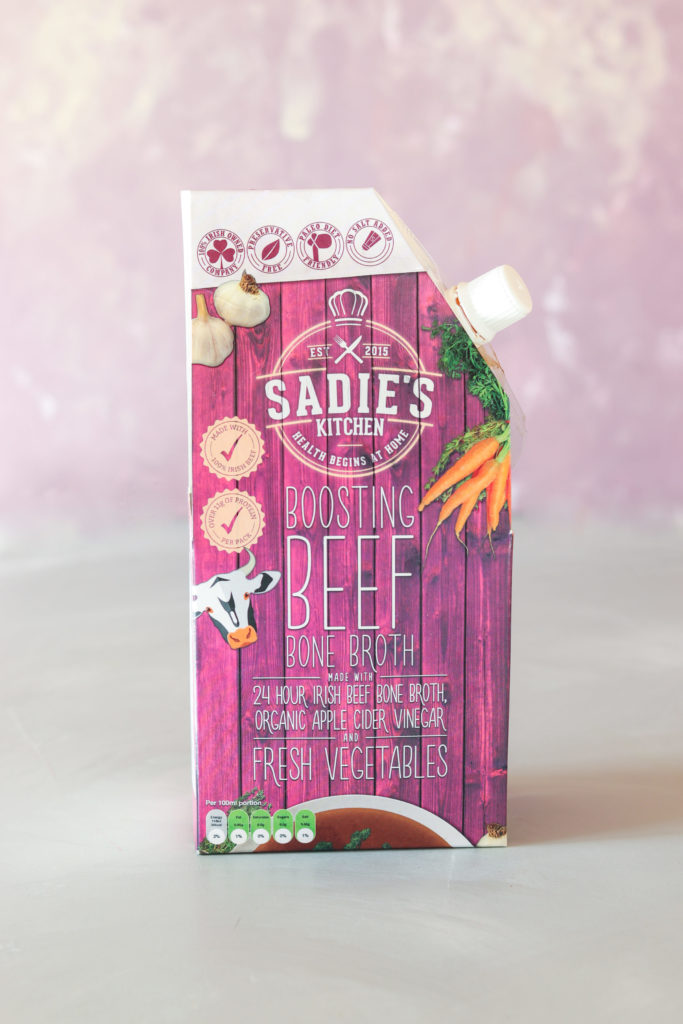 Bone broth FAQ: How do I use it?

Bone broth can be used in many ways, from being a substitute for stock (bone broth contains a lot more nutrients than your average stock and plenty of delicious gelatin), eaten as a soup or used as a tasty addition to so many different recipes.

How can I eat it?