Get in line: 5 films that will have everyone talking this autumn

Hello, autumn, hello award-season build-up. This time of year does mean the big screen goings-on get extra juicy and with the festival circuit having some standout contenders already, time spent in a dark theatre, sheltered from the elements doesn’t sound half bad. Here are five we can’t wait for.

While writing this, I almost wrote Joaquin Phoenix’s name as the late Heath Ledger, such are the comparisons to Phoenix’s already acclaimed performance. Fresh off winning the top award at the Venice Film Festival  – the Golden Lion – Joker is poised to be the most talked-about film of 2019. Phoenix follows in the footsteps of fan-favourite Jokers before him — not easy when you think of the incarnations played by Ledger (The Dark Knight) and Jack Nicholson (Batman) that are considered iconic.

He plays Arthur Fleck, a washed-up comedian whose life circumstances and deteriorating mental health turn him into Batman’s archnemesis in the fictional Gotham City. This is its own film with echoes of the comics throughout but the methodology is right; it was only through his own suffering that Joker grew into the figure he is today – and this film details a more emphatic look at his origins. Phoenix hasn’t generated this much buzz since Walk the Line so considerable acclaim surely awaits him.

In cinemas from October 4th 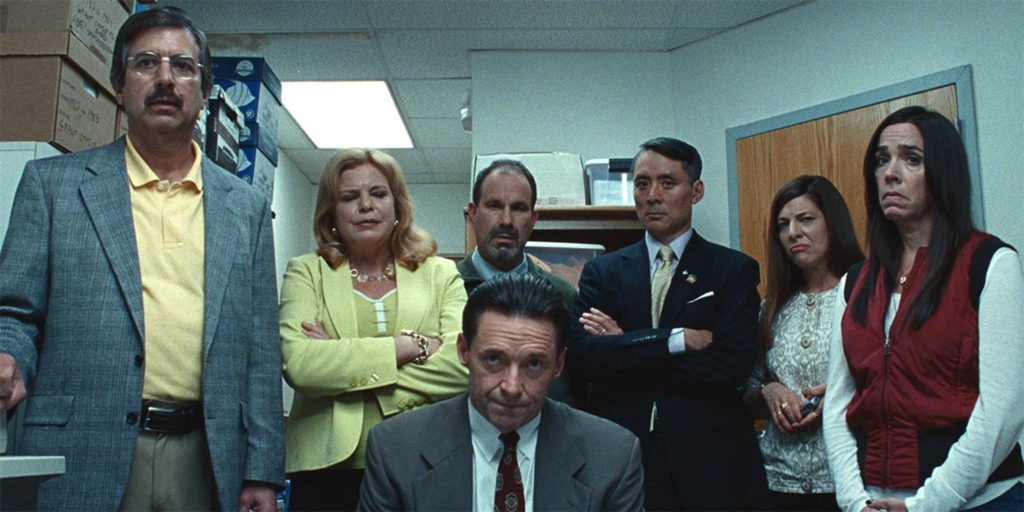 In 2002 Frank Tassone (Hugh Jackman), a much-loved school superintendent is determined to push Long Island’s Roslyn High to the top of the area rankings with the help of the construction of an elaborate “sky walk” to boost the school’s image. An eager student reporter is soon assembling a “puff piece” for the school paper about the plans but after interviewing Frank and his assistant superintendent, she suspects something is amiss. Based on a scandal that rocked the upmarket New York suburb of Roslyn over a decade ago, this is a tale unbeknownst to many and works extremely well on screen.

Bad Education is set for release around early 2020

The original Romanian title of Alexander Nanau’s documentary, Colectiv refers to a Bucharest nightclub which was the site of a fire in 2015, the terrible results of which are the basis for this gripping documentary. It begins with the fire that broke out at a rock concert at Colectiv on 30 October 2015 – which we then see in a piece of video footage, captured on a mobile phone.

Related: 7 Netflix series and films we can’t wait for this autumn

A lack of fire exits led to 27 concertgoers being instantly killed and another 180 injured but the tragedy doesn’t end there; 37 later died in hospital due to inadequate care facilities (despite official assurances that Romanian healthcare was up to European standards). The film then follows Catalin Tolontan and his fellow journalists as they ask why people died of bacterial infections, contracted in the hospitals. Gripping, heartwrenching and a completely necessary watch.

Collective will be released this autumn

After a compelling English-language debut in Jackie, director Pablo Larrain returns to his native Chile for Ema, a drama starring newcomer Mariana Di Girolamo who plays a mother and dancer in the midst of family trauma. Ema is married to her dance instructor Gaston, and their relationship is largely broken, due to the fact that their adopted six-year-old son, Polo, has been sent back to social services and placed with another family. This isn’t perfect but its visuals, striking, extreme performance from DiGirolamo and the fact that it’s a portrayal of women and motherhood we rarely see on screen make it one to watch.

Ema will be released this autumn

Noah Baumbach’s tale of a playwright (Adam Driver) and an actor (Scarlett Johansson) trying to keep things civil as they negotiate a divorce and a bicoastal custody agreement was met with rave reviews at the Toronto Film Festival – due to the enigmatic performances of the two leads. Things turn nasty and the film loses some momentum but both actors more than hold their own. At times it is gut-punching – alongside the standout performance from Laura Dern – but you’ll always stay with it. One that will get everyone talking.

Marriage Story will be streamed on Netflix this autumn