The Dublin Rape Crisis Centre released its annual report for 2014 today, with the news the National 24-Hour Helpline had experienced a 30% increase from 2013 in first-time callers particularly standing out. Angela McCarthy, Director of Clinical Services at DRCC said the Helpline was seeing – a dramatic increase in calls relating to rape.? Calls relating to adult rape had seen an increase of 14% in 2014 from 2013.

In 2014, the Centre handled just over 12,000 counselling contacts to the Helpline with 269 emails and 237 text messages also addressed. Over 5000 of the 11,553 phone calls came from first-time contacts. 76% of the callers were female, with 24% male callers. The amount of men calling has increased steadily since 2008, when 14% of callers were men. There has also been a 10% increase in the number of calls relating to adult sexual violence. For calls relating to childhood abuse, the increase has been 3% compared to 2013. 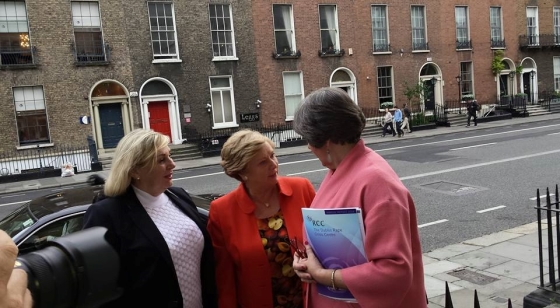 The report was launched this morning by Minister for Justice and Equality Frances Fitzgerald. The Centre tweeted that the Minister stated she would prioritise victims of sexual violence with the legislation of the Sexual Violence Bill. The Minister will be transposing the EU Directive on Victims? Rights into Irish Law later this year, thus giving men and women who have been victims of sexual assault and abuse greater power when it comes to legal proceedings. Ann Marie Gill, chairperson of the Dublin Rape Crisis Centre, has attributed the current status for victims to the reason attrition rates are so high in the Irish criminal justice system when it comes to sexual assault cases. ?The perpetrators will no longer be afforded the latitude of committing these most heinous crimes with impunity and we will look forward to having a safer society for all,? she says of the new laws we can look forward to seeing in place by the year’s end.

The Dublin Rape Crisis Centre has managed to carry out its amazing work despite cuts in recent years. Since 2009, the Centre has had over €300,000 in funding cut. Ellen O?Malley Dunlop is the CEO of the Rape Crisis Centre and has said that ?As a consequence of the cuts the DRCC has restructured its operations so that it can continue to offer the services that are so vital to victims of sexual violence in the most densely populated part of the country. However, it is not possible to sustain these vital services without a commitment from Government to begin reinvesting in these frontline services now!?