The SJP Kim Cattrall feud: is either side right?

As talk of a rumoured feud between Kim Cattrall and Sarah Jessica Parker continues, we can't help but wonder... is either side actually right?

Late last week came the sad news that the brother of Kim Cattrall had been found dead after going missing from his home in Alberta, Canada. Unexpected and untimely, Cattrall and her family were obviously devastated. After announcing the news, Kim posted a message on her Instagram feed, thanking her friends, family and her Sex And The City colleagues for the support she had received since the news broke.

Unsurprisingly messages came flowing in from the public. But to many’s surprise, included within that stream of condolences came one from former SATC co-star (and Cattrall’s notorious frenemy) Sarah Jessica Parker.

We all know the duo made up half of the four-part girl gang of fictional BFFs, but off-screen it was a different story entirely. Reports of friction and hostility between Parker and Cattrall have circulated since the early SATC days, all of it (apparently) stemming from resentment over pay and power. So things have never been “cosy” between the two.

Putting yourself into Kim’s shoes, you can understand how having this non-friend reach out in what would seem like a very public, very loving way, would send grieving Cattrall into a state of livid rage.

SJP wrote: “Dearest Kim, my love and condolences to you and yours and Godspeed to your beloved brother. Xx.”

To which Cattrall responded with… 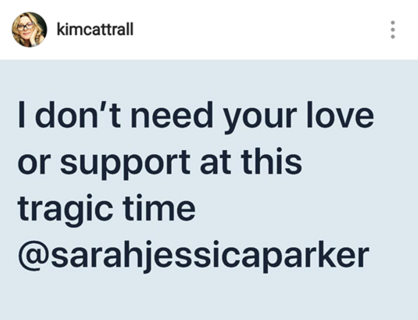 My Mom asked me today “When will that @sarahjessicaparker, that hypocrite, leave you alone?” Your continuous reaching out is a painful reminder of how cruel you really were then and now. Let me make this VERY clear. (If I haven’t already) You are not my family. You are not my friend. So I’m writing to tell you one last time to stop exploiting our tragedy in order to restore your ‘nice girl’ persona.

This seems like a shocking reaction from someone who’ we can only imagine has had extensive training on how to act within the public arena. It seems like the kind of thing that would come from a jilted teenager who has just learned of a friend smooching her crush. Certainly not what you’d expect from a seasoned actress in her 60s.

Having said that, private and public lines have been increasingly blurred since SATC first aired, so maybe both sides have lost sight of what the appropriate behaviour should be. These days it’s not like any of us can be 100% sure 100% of the time, really.

Age and background aside, consider this, how would you react in her position? Your brother has just been found dead and this person who you feel has compromised your professional progression for years, who you feel turned all your co-workers against you, isolated you, portrayed you as a power-hungry diva, reaches out. And it’s not in a discreet private way for your eyes only, but as a public comment for the world to see.

Whether Kim is right or wrong, and whether or not SJP was trying to exploit this situation to restore her “nice girl persona” (which she has been known to be quite preoccupied with), if SJP really wanted to show Cattrall she cared, she could have shown her support privately. Flowers, a text, even a WhatsApp message or private Instagram message would have been better than that.

When someone is grieving, the onus is on those around them to read the signals and react accordingly. Sarah’s decision to send a public comment gives off the impression that she has seen an opportunity to portray herself in a positive light for all to see, as opposed to showing genuine condolences.

While Kim Cattrall’s response might feel like an attempt to virtually shoot pepper spray into Parker’s eyes, SJP’s comment does not come without the undertones of a subtle stiletto heel to Kim’s back. This is Mean Girls-meets-The Devil Wears Prada-meets-Confessions of A Teenage Drama Queen.

We can’t disregard the fact, however, that there are always two sides to every story. So say what you will about Kim’s actions being over the top, and maybe SJP really did just mean well, but you can’t contest that there’s a way to show condolences to a grieving colleague, and ways to react to a hurtful comment. Hint: both of which do not include messages on the public sphere.

The IMAGE PwC Businesswoman of the Year Awards 2022 winners are…