The Flip Side: Ireland’s creative entrepreneurs on what their smartphone means to them

Forget everything you think you know about smartphones. Samsung has revolutionised the selfie game yet again with the Galaxy Z Flip, a new foldable device that fits into your pocket as seamlessly as your compact. The first foldable glass technology that allows a hands-free camera and video function in both portrait and landscape mode, this is a smartphone for those who want to be seen. We asked five creative Irish entrepreneurs what this new content-maker will mean for their business. 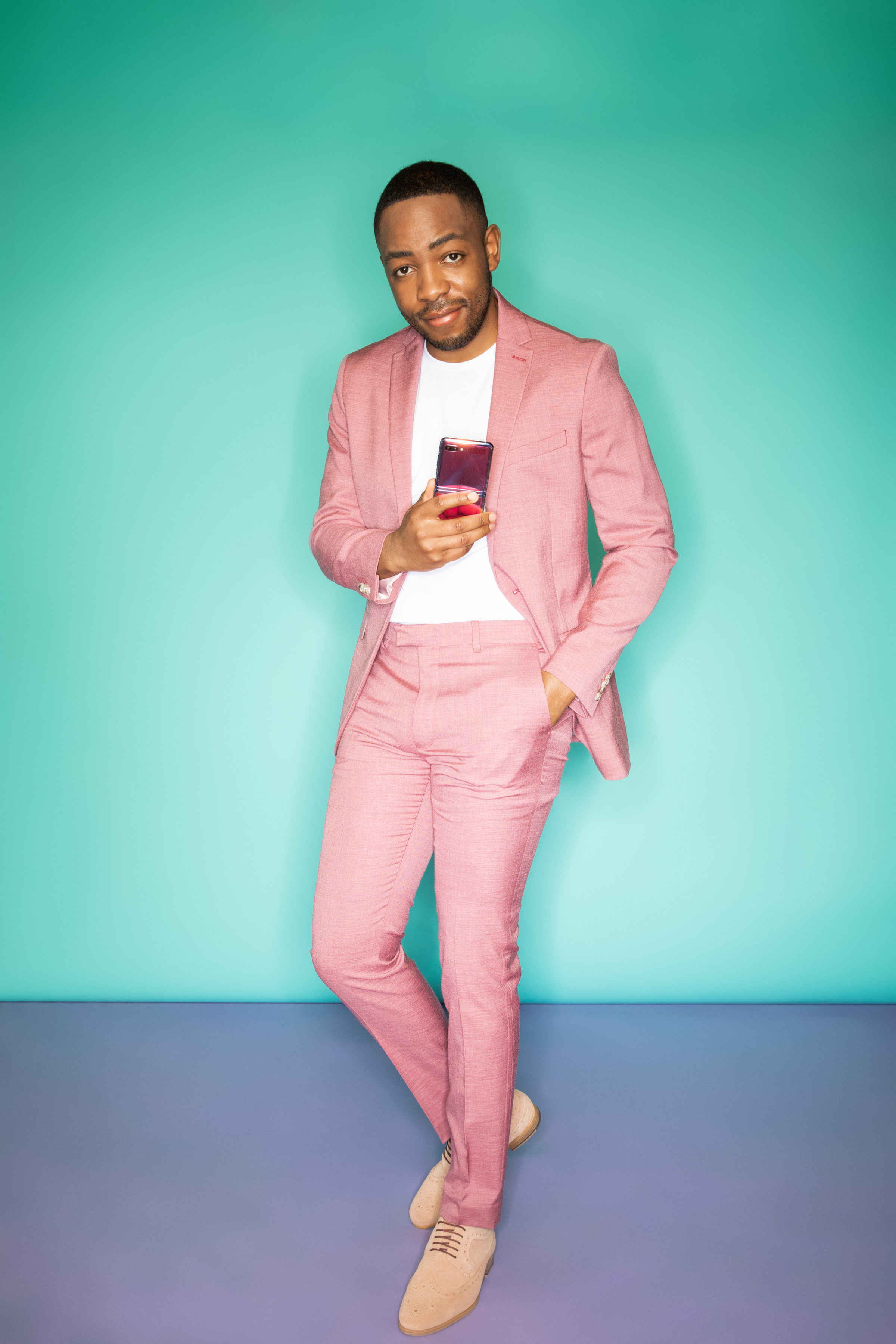 Fashion blogger and future influencer Lawson Mpame (@lawsofstyle_) admits he is “married” to his smartphone.
“I’m always on it for work; I’m constantly checking emails, going to events, taking photos. Even on the weekends, if I go hiking, I’ll have my phone with me, so the convenience of this new Samsung Galaxy Z Flip to fit in an inside pocket is slick.” Lawson relies on a social media following and high engagement on the content he posts for his day job. He notices that when he takes a break even for a few days, his social media activity staggers. “I have tried to implement a healthy balance, but it’s a struggle knowing when to take a break and not to take a break. I use my phone for all of my content. The camera has to be really good, the user interface has to be really easy to use. I prefer using Android with a big screen, as I send a lot of emails from my phone. And the phone has to look good. I like bright colours.” With a growing following on Instagram, Lawson says the key to social media success is to “create meaningful content that you actually love, and your audience will resonate with it”. But most importantly, he’s just here to have fun. “If you aren’t having fun, what’s the point?” 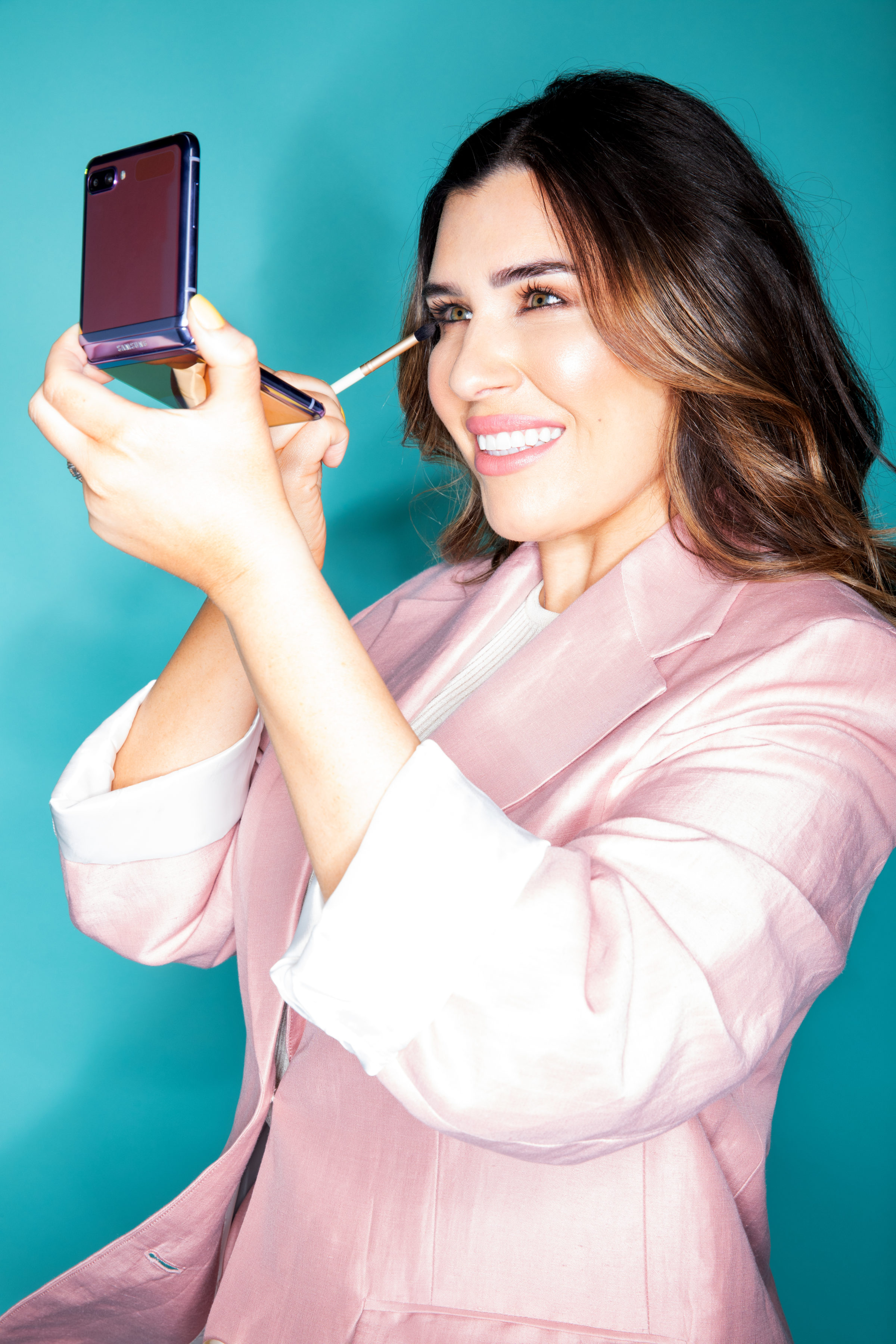 Make-up artist Lisa Shannon left her full-time job with MAC to go out on her own three years ago. More than 20,000 followers on Instagram later (@_lisa_shannon_makeup), she has never looked back. Lisa says her social media following was organic, but that she “wouldn’t have a business without Instagram”. Her photos – all taken on a smartphone – were key to her getting noticed in an online platform saturated with MUAs. “My photos show a different style of make-up. It’s this natural, fresh beauty. It’s not thick liner or full brows. I want people to see my feed and think, ‘I want to look like that.’” The hands-free split screen on the Samsung Galaxy Z Flip will be ideal for Lisa’s social media content creation. The majority of Lisa’s clients are brides. “With that comes pressure. You can’t just be the make-up artist, you need to be the friend, and the stylist, the photographer, and even a shoulder to cry on in those manic moments on the morning of a wedding. It’s hectic, but to me, those things matter.”

Read more: Why you’re going to see every influencer you follow with this phone 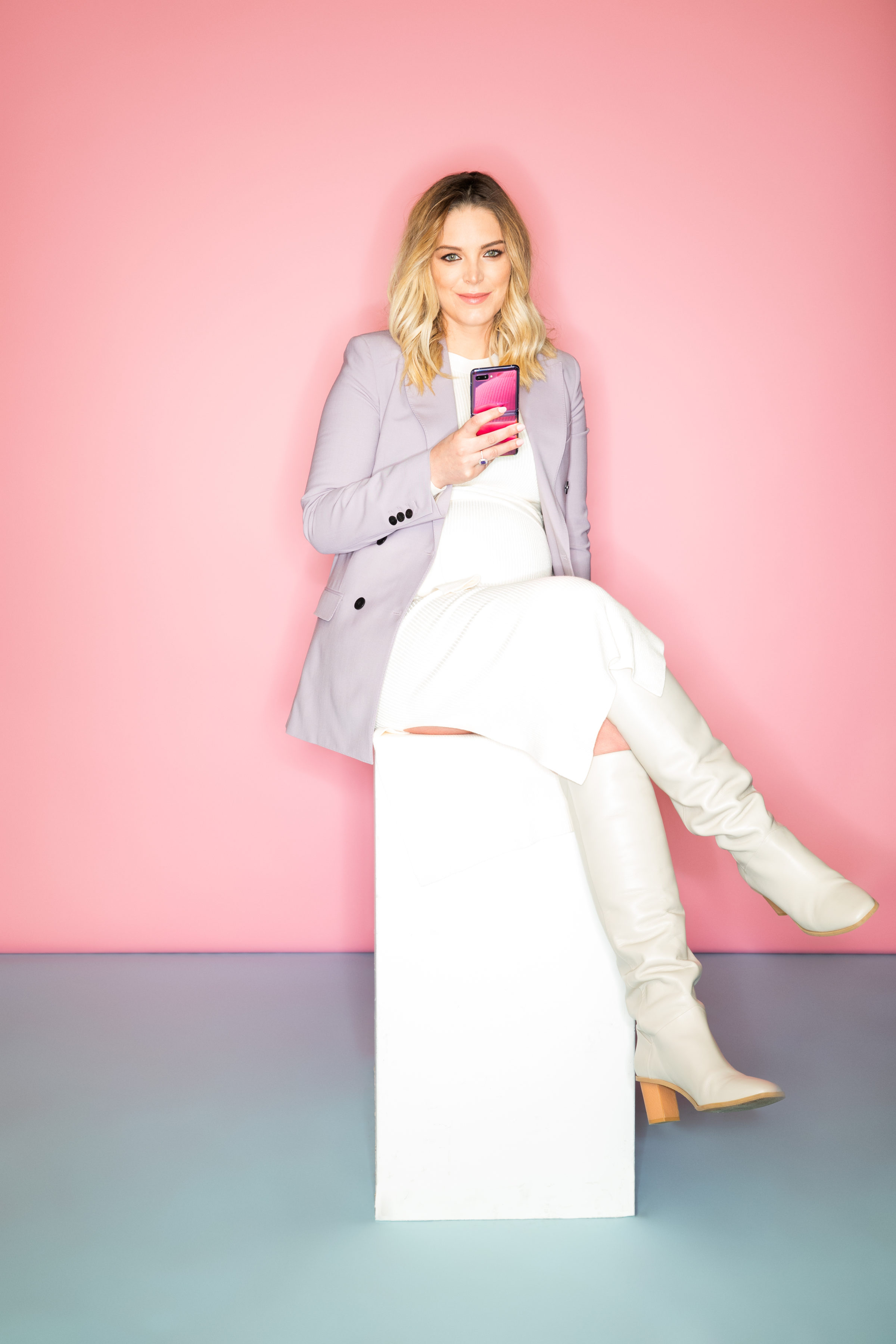 Interior designer Suzie Mc Adam doesn’t do things by halves. In the last 12 months, she has renovated her home, opened a new design studio, and is currently preparing for her first baby, due in April. “It’s chaotic organisation,” says Suzie, who relies on her smartphone for “all of the communications side of the business”. She supervised the renovation project on her Sandycove home while her Irish Army Commandant husband was working in Lebanon. She then jumped straight into overhauling her new Monkstown business premises that she shares with her team of seven designers. And she is “as prepared as I can be” for the arrival of her baby boy, having already started the nursery and decided to keep the “good room” in her home. “I love beautiful fabrics and beautiful things, I didn’t want to compromise on that, so I think I’ll still have that room. But I’ll try and keep small hands away from the wallpaper!” Suzie is planning to take just one month of maternity leave. “It is daunting because it is my own business. I’m a bit of a control freak, so taking a step back will be difficult.” The Samsung Galaxy Z Flip with a full 6.7” screen that fits in your pocket is key to a working mum like Suzie’s success. “If I’m travelling for work, everything is on my phone. I don’t use my laptop unless I really need to.” @suziemcadam 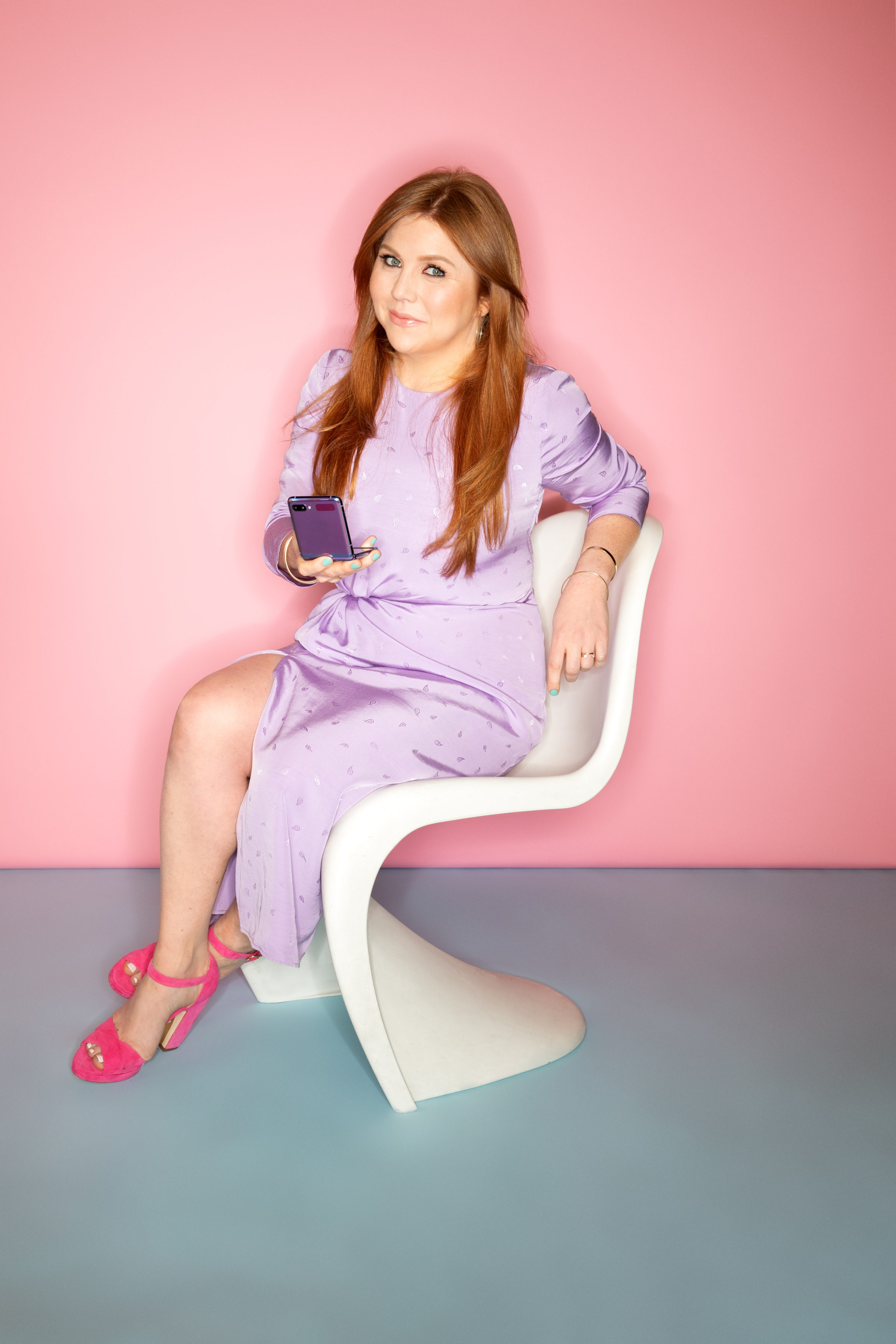 Natasha Sherling’s personal life and business schedule shifted when she had her first baby 18 months ago. “My time is much more precious now. I would have worked day and night if I could,” says the fine jewellery designer. “I love my job and I love working, but my daughter has forced me to take a look at my schedule. I can’t take evening appointments anymore; my working day is done when I pick her up from crèche.” She has restricted all phone and social media (@natashasherlingfinejewellery) use to work only. “My life is much tighter, and there’s just so much more to do. That’s why it’s so important for me to have a good camera function on my smartphone. It’s really difficult to take good photos of jewellery; it’s really important that the detail and colour are accurately captured. And then you need great video quality because lots of jewellery only comes to life when you see it worn.” The Samsung Galaxy Z Flip’s game-changing camera contains a video recording function with a 16:9 ratio that can be used hands-free – ideal for capturing intricate jewellery. 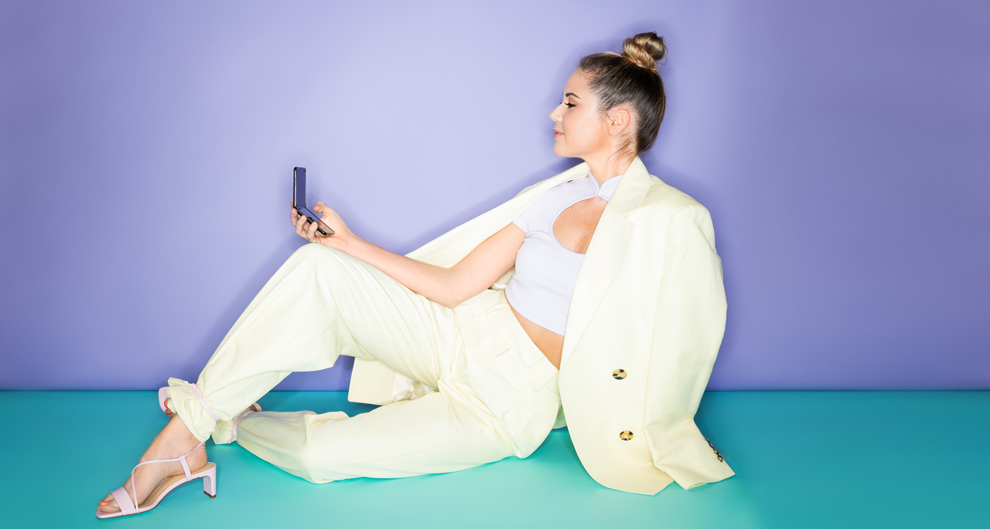 After moving back to Ireland, having spent six years in Australia, Sinéad Mooney, known as Moons Yoga, began documenting her yogi lifestyle on social media. “I record videos and little pieces to camera for social media, all through my smartphone – it’s invaluable. To create an impact with a photo on social media (@moonsyoga), especially yoga poses, you need a great camera.” For yogis like Sinéad, the hands-free selfie and vlogging function on the Samsung Galaxy Z Flip is a game-changer. It unfolds and can remain open at multiple angles, unlocking on-the-go content without a tripod. Smart add-ons like Single Take and Google Duo allow more of the world around you to be captured. “My business is so big now, I’m like an octopus mixed up in all the different arms of it,” says Sinéad. As well as her yoga studio in Blackrock, which is open seven days a week, Sinéad has ten teachers working for her, hosts international yoga holidays with TD Active, and has developed a range of sustainable yoga wheels with HuKu. “I have a daily commitment to my spiritual practice, meditation for example, which I commit to twice a day. This keeps me aligned and focussed.”

The Samsung Galaxy Z Flip will be available to purchase from Three Ireland and the Samsung e-store here, from March 27.