Millions are scrambling for alternative messaging services after Facebook-owned WhatsApp’s latest privacy update which has also lead to widespread confusion. 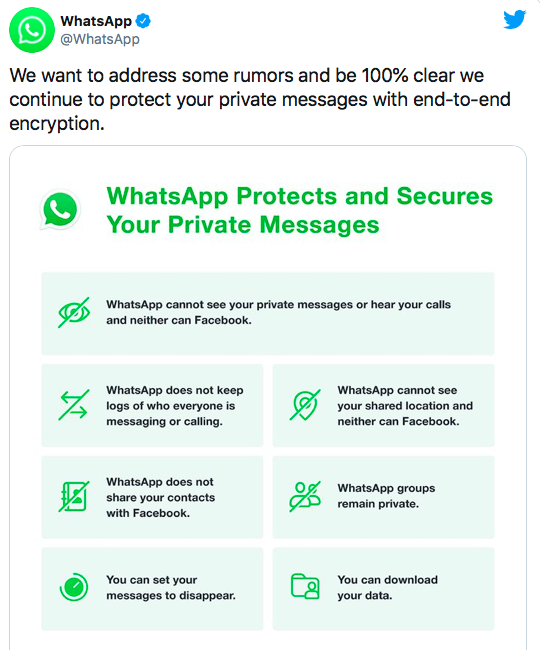 In January, those using WhatsApp received a message to say a new mandatory update was being rolled out. Those refusing to consent would see their accounts deleted by February 8th.

A reference to Facebook caused further confusion. The social media giant has had ongoing bad press for its data privacy practices. The reaction meant WhatsApp announced it would delay the changes until May.

In a blog post, the company said that “we’re now moving back the date on which people will be asked to review and accept the terms.” It added that its practice of sharing some user data with Facebook was not new, and was not going to be expanded.

The European Data Protection Supervisor spoke out about the new terms of use saying that people don’t really understand what the extra consent is for. “WhatsApp’s announcement to its users was “extremely short” and “trivial.”

“Since people are aware of the concentration of the market, and the fact that there are fewer and fewer companies which are actually having more and more control over the information online, the situation with the sharing of the data between services is creating some doubt for the users,” he said

European and UK users are not expected to see the same data-sharing changes, although they will need to accept new terms.

The main concerns were that broader sharing between the two platforms would compromise data protection. In reality, these updates relate specifically to features that allow users to message and interact with businesses on WhatsApp.

It is also important to point out that the contents of messages cannot be viewed by either company because they are encrypted – a part of the T&C that isn’t changing. Anyone with concerns over their privacy and data management can look into rivals apps Telegram and Signal.

Meanwhile, Ireland has ongoing GDPR investigations into other aspects of the tech giant’s business.

UPDATE: WhatsApp has announced it will release a dropdown banner explaining its upcoming update to users. The banner will lead to a page where it will break down exactly what is and what isn’t changing with the forthcoming update, which has been postponed to May 2021.

Why are tears a common female response to anger during a conflict?