Courtney Cox was the first person to say "period" in a TV ad.

Before the infamous Tampax ad, there was a plethora of menstruation advertising that would leave you with your head in your hands. Take a trip with us down memory lane to see just how far we’ve come.

“Whoah, Bodyform for youuuuu.” You may not remember the specific ad, but no doubt you know it, as it looked exactly like so many period ads that came before and after it: A smiling, confident woman in a slip of a light-coloured dress, looking carefree and happy outdoors.

Because that’s the reality of what women are like when menstruating, right? Not just going about their business like normal human beings (and certainly not lying on the couch, hugging a hot water bottle and feeling like crap). No, women on their periods in TV ads were almost always jumping, running, laughing, occasionally skydiving – and yes, usually wearing white.

As much as we might eye roll at how desperately out of touch ads for pads, tampons and other menstrual products are, advertising has power and influence. It’s a tool for sharing information and has the potential to cause shame, confusion and stigma around all things period-related (not to mention making thousands of teen girls wonder if their period blood is supposed to be blue).

Thankfully, period ads are waking up, becoming more self-aware, self-deprecating and even empowering. Tampax latest ad explaining how to properly insert tampons might have got some viewers’ knickers in a twist, but 80 complaints does represent the vast majority. Take a trip with us down memory lane to see just how far we’ve come.

1920s: The one where periods are a problem 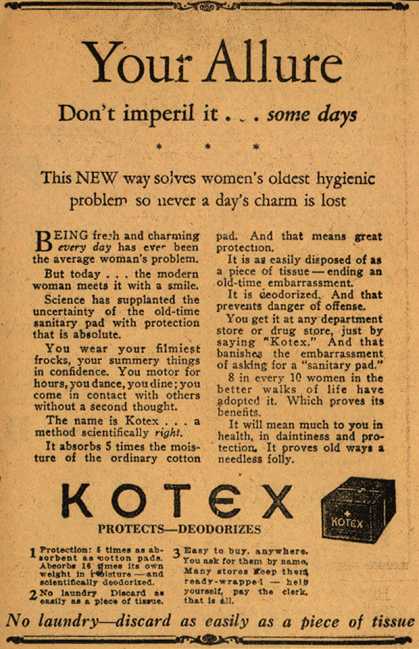 Back when women put money into a container and took their pads from a box so they didn’t have to speak to a sales assistant, the ads of the time reinforced the idea that periods were something to keep quiet and be ashamed of. Many, like this one from the 1920s, were all about framing periods as a problem to be solved, something that put your “feminine allure” in danger.

Designed to be used during your “calendar anxieties”, many ads of the time were laughingly cryptic. But the above video that leading pad brand Kotex bankrolled in 1946 – created by Walt Disney, of all people – is actually refreshingly normal and informative.

1950s: The one that leaves you guessing 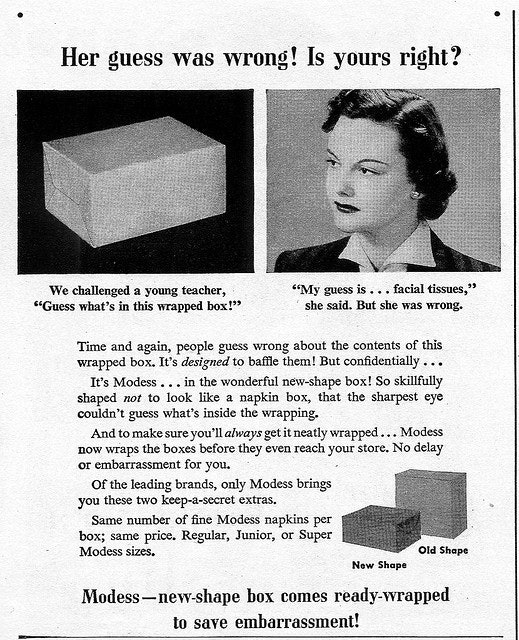 The recurring themes that periods are something to keep hidden from the world raises its head again, this time with an ad from Modess that showcases how you’d never guess this box contained a period product (because God forbid anyone would find out your “secret”). 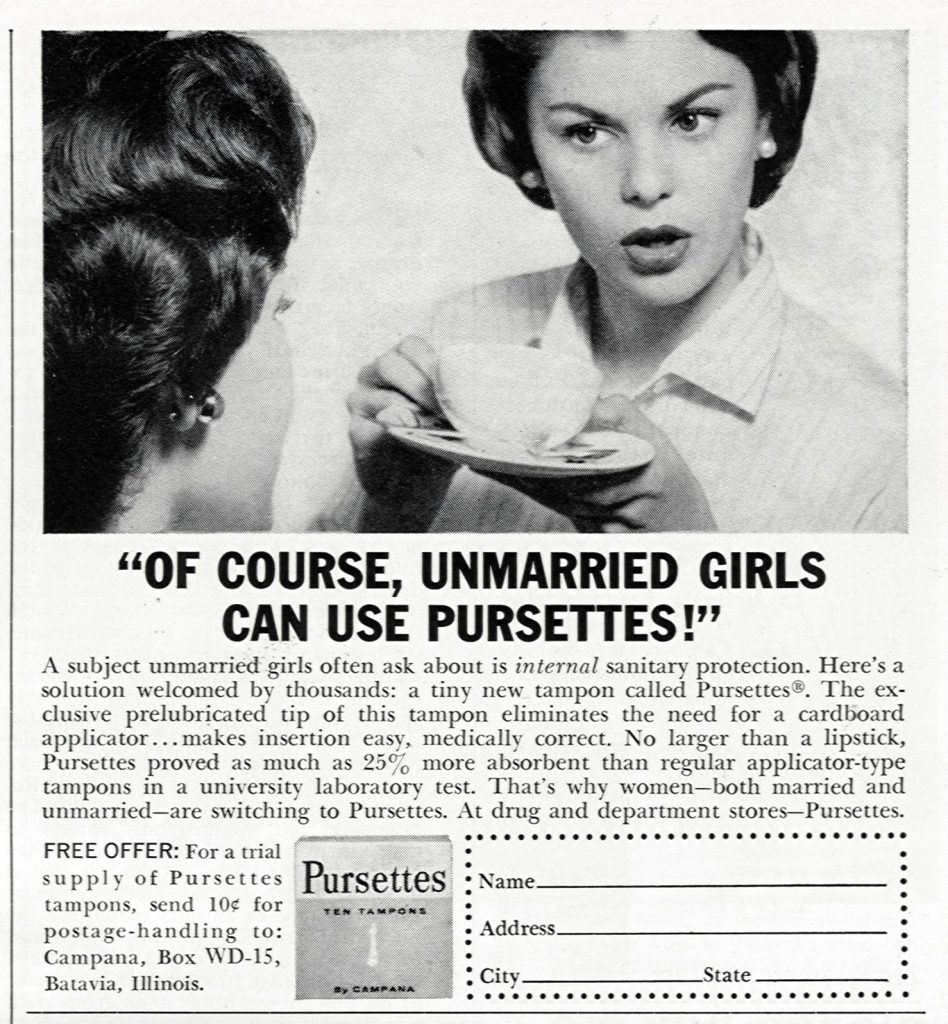 “No larger than a lipstick”: This ad was one of a few tampon brand Pursette created designed to dispel myths that tampons took your virginity (a misconception that hung around for a while – as late as the 90s, a Tampax ad included the assurance: “You can use them at any age and still be a virgin”).

Believe it or not, the first person to even say the word “period” in a TV ad was Courtney Cox, in this 1985 slot for Tampax. Sadly, in Australia (with a young Naomi Watts in the lead role), your period was simply billed as a life hassle, and “one you don’t talk about” at that.

1990s: The one where period blood is blue

Reinforcing the idea that period blood is too gross to show on TV, the weird clinical blue liquid used in menstrual pad ads dominated TV screens in the 90s. It was also used in some ads for nappies, which would lead to much confusion among young girls as to what colour their periods were actually supposed to be.

2000s: The one with the teeny tiny tampon

You’d think by the noughties period ads would have moved away from focusing on keeping things hidden but, alas, no. As this 2005 Tampax Compak ad shows, making sure period products were as discreet and undetectable as possible was still a huge part of the ad agenda.

After years of tired tropes, brands began getting savvy, even releasing self-deprecating commercials that made fun of period ads. One of the better ones is this 2010 one from Kotex, above, which actually features clips from its very own ads from over the years.

Bodyform’s 2016 “no blood should hold us back” campaign showed graphic images of women bleeding from sport injuries.

And 2018’s Blood Normal campaign, also from Bodyform, finally replaced the ubiquitous blue liquid with something a bit more blood like and the tag line “Periods are normal. Showing them should be too.”

‘Get them up there girls!’ isn’t exactly the most subtle slogan for a tampon advertisement, but you’ve got to admit it’s effective. But it was this line from the new advert from Tampax, where the host enthusiastically explains to viewers how to properly insert tampons for optimum comfort, that led to nearly 80 complaints to the ASAI, which included claims that the ad was offensive, demeaning to women, unsuitable for children, and that it contained sexual innuendo.

After years of shame, secrecy and downright weirdness I really hope that period ads continue making some progress towards de-stigmatising something half the world experiences.

About bloody time, I say.

Related: 8 great Dublin restaurants with heated outdoor seating to enjoy for the next three weeks

Related: 5 movies I was really looking forward to this year (and when we’ll eventually get to see them)

Now is not the time to look away

WATCH: Emotional scenes at Dublin Airport as families say goodbye before heading back to Ukraine to join the fight