It's impossible not to love the (frankly iconic) pop duo at the moment. Their latest refreshing stance on calling out the gloss in the music industry is refreshing and a sign of the times – the powerhouse that was institutions like the X Factor arguably no longer have the same sway in 2021, and the brothers say a reformation is long overdue – with support from former contestants.

In an industry that can take itself far too seriously, the Irish pop duo is calling out an institution in music, the X Factor, for allegedly making each contestant, “slave to the show.”

The pop duo featured on the show back in 2009, where they appeared alongside Olly Murs, Stacey Solomon and Joe McElderry (who won that year).

We all have heard the rumours of the impact of powerful reality shows; Little Mix, One Direction and Leona Lewis are only some of the acts who have publicly said they felt stuck or rooted at Simon Cowell’s label, which dictated when  – and what type of – music they could release. Jedward also rightfully took aim in this sense at how even successful artists are continually treated and silenced, saying it’s never a level playing field when it comes to the industry.

Non-Disclosure Agreements NDA’s are very prevalent in the music industry! Resulting in no one talking about the abuse/stuff that happens!

Never mind that some X Factor winners and contestants we hardly heard from again with press alluding to creative differences between the man at the helm and deals suddenly dropped (Louisa Johnson, Amelia Lily and James Arthur are a few who come to mind here). Gone are the days where a win was a guarantee of anything, generally unless huge sales followed off the back of the winner.

Now John and Edward are using their Twitter platform to share their opinions on the show and they dropped more than a few bombs.

“The Biggest regret in life was not telling the judges on Xfactor to f*** off” they began, before continuing to say, “Every contestant on the Xfactor was a slave to the show and got paid Zero while they made millions!”

The pair also took aim at the judges of the show, and said the mentoring was essentially nothing but an act the contestants had to keep up.

“The fact that every contestant has to act like their judge mentors them! When in reality all they care about is their paycheck!” they wrote.

Just here casually waiting for the Lawyers to come threatening us! Good Luck from the whole fandom ?? Justice is gonna be served!

They remain unafraid of any potential repercussions and also have the backing and support from former contestants.

X Factor star Rebecca Ferguson has demanded a parliamentary enquiry into the music industry to protect artists. The singer, who took part in the series in 2010, said in a detailed thread on social media that she has arranged to meet Oliver Dowden, the Secretary of State for Digital, Culture, Media and Sport in the UK, to discuss the welfare of musicians.

‘It’s showbiz’ does not give an excuse or a free pass to accept a standard of behaviour people would not tolerate in any other walk of life.The narrative that this should be accepted because “it is what it is with this industry” is the major issue & does a diservice to humanity!

“People have warned me for years about doing this or have encouraged me not to speak out, and unfortunately, I realise that my career maybe once again affected by speaking out. However, enough is enough and musicians/artists/creatives need change, a lot of my damage has been done but this is about protecting people in the future. At one point in my career, I collapsed 3 times in a day I was unconscious! My head hit the floor! No ambulance was called! This is one of many stories. This is the reality of artist mistreatment this is why I fight,” she said.

Fellow singer Cher Llyod also alluded to her own mistreatment, as she posted a video on TikTok showing her singing the lyrics: “How could I be so naive? They sold me the dream just to exploit me.”

Asides from the above, since the pandemic, the boys have been a ray of light on social media.

Remember when they sent fans lovely DMs? (happily, I was one!): 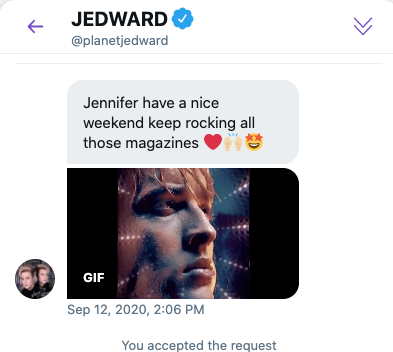 Or when they encouraged us to mind our sensitive Irish skin?

Please Protect your skin from the sun! Wear Suncream! This is the result of severe sunburn pic.twitter.com/jPhj1PqhJ5

They use their platforms to help raise awareness:

Our Mom died from Cancer and We are shaving off our Quiffs to raise money for Cancer! @IrishCancerSoc pic.twitter.com/u1fZ9oRKGj

And of course, the music:

Everybody hurts ?? It shouldn’t be normal that all artists have to face the emotional and legal battles when all they wanted to do is sing! pic.twitter.com/hwF9qTYCeA