The #MyTitleIsDr is trending after thousands of women spoke out about the chauvinist article written in the Wall Street Journal as an Op-Ed. Amanda Cassidy reports

“Madame First Lady — Mrs. Biden — Jill — kiddo: a bit of advice on what may seem like a small but I think is a not unimportant matter,” Joseph Epstein wrote at the start of his column for the Wall Street Journal.

“Any chance you might drop the ‘Dr.’ before your name?” he continued. “Dr. Jill Biden’ sounds and feels fraudulent, not to say a touch comic.

“Your degree is, I believe, an Ed.D., a doctor of education, earned at the University of Delaware through a dissertation with the unpromising title Student Retention at the Community College Level: Meeting Students’ Needs,’” he wrote in the piece entitled ‘Is there a doctor in the house? Not if you need an MD‘

The column prompted reactions from Biden’s team, and others like former first ladies Michelle Obama and Hillary Clinton.

On Instagram, Michelle Obama wrote; “For eight years, I saw Dr Jill Biden do what a lot of professional women do — successfully manage more than one responsibility at a time, from her teaching duties to her official obligations in the White House to her roles as a mother, wife, and friend,” 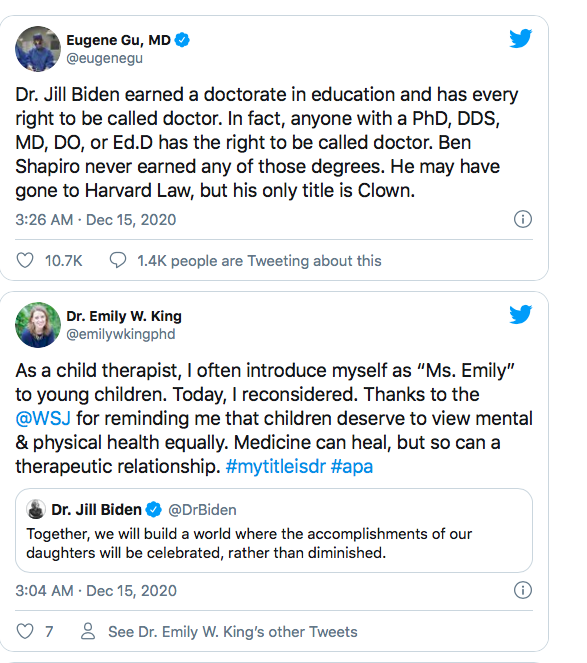 All too often, our accomplishments are met with skepticism, even derision. We’re doubted by those who choose the weakness of ridicule over the strength of respect. And yet somehow, their words can stick—after decades of work, we’re forced to prove ourselves all over again.

Is this really the example we want to set for the next generation?”

We know that sexism is hiding in plain sight – but this is a rare, ugly glimpse of it in all its true glory. Minimising accomplishments, condescension and for what?

It’s prompted two questions we should all consider. Firstly, how can women possibly try to elevate themselves to the top of their field when even those in the spotlight are torn down. What hope is there for us mere mortals?

Second, why does he even care? Maybe it’s personal, maybe Dr Biden gave him a C when he took one of her classes? Maybe he is just an angry man. Or maybe it is because he can.

Epstein’s choice of words betrays any point he may have been trying to get across. Calling Dr. Biden “kiddo” is chauvinist and dismissive.

Paul Gigot, the man responsible for the newspaper’s opinion section stood by its writer saying that “Mrs. Biden is now America’s most prominent doctorate holder and is taking a leading role in education policy. She can’t be off-limits for commentary.”

But Dr. is the title that Biden earned and prefers. The paper’s comment suggested that only physicians merit the title, even though (as many, many people have pointed out) it comes from the Latin docere, “to teach,” and that is what Biden is: a teacher.

Epstein’s disdain is obvious – whether or not he would do the same to a man we can’t know. Either way, choosing to use someone’s title is, of course, an optional method to show respect.

But reading between the lines, this looks an awful lot like another case of men dismissing women’s credentials. And that is a little old hat, even for him.

Read more: Why Marks and Spencer is accused of sexism over window display

Read more: Internalised sexism – what is it and what to do about it

Strong woman syndrome: Are you carrying the weight of invisible labour?