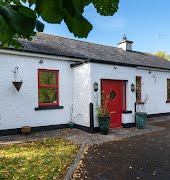 Having come to the realisation that certain aspects of her role as a journalist no longer fit, Aingeala Flannery decided it was time to hang up her headset and become a full-time writer. With her debut novel just out, she’s pretty confident she’s made the right choice.

The first time I heard the expression “imposter syndrome” I was in a therapist’s room looking for a cure. I’d been having what my doctor described as “panic attacks”; sudden episodes of acute anxiety that made my heart race and my hands shake and sweat. There’s no good time to be immobilised by panic, but my attacks were happening at the most inopportune time: when I sat down to read the news live on national radio. “It simply will not do,” I told my GP. She nodded sagely and referred me to a cognitive behaviour therapist, who worked with people in “the creative industries”.

The therapist’s room was between the Gate and the Abbey theatres. He was a nice man who was in the business of helping people overcome performance anxiety. I’m a journalist, not a performer, I told him. But you are performing, he said. This was true. I was delivering a script to an audience, something I’d been doing for years, something I loved – or used to love. There was no rational reason to panic – I wrote my own scripts, I was an experienced broadcaster… a journalism lecturer, for heaven’s sake. I trained new recruits to the radio station. I just couldn’t do it myself anymore.

I took up Bikram yoga. I ate properly. I drank less. None of it worked. Fear uncoiled like a snake inside me, it slithered up my spine and wrapped itself around my throat every time I walked into a news reading booth. In my dreams, computer screens went blank and paper scripts burst into flames when the studio light came on. Once, I dreamt I had to read the news in French. Afterwards, my boss told me to sit my Leaving Cert again.

When I told the therapist, he said one of the characteristics of imposter syndrome is the fear of being exposed as a fraud. How do you get on with your boss? Great, I said. She saw me as “presenter material” and wanted me on-air more. The therapist seemed to think this was a vote of confidence. They’re under pressure to have more female voices on-air, I said. There was an organisation called Women On Air giving out about “manels” – panels of men opining and being experts as if women had nothing to say about the matter. They were right – most radio presenters were men, most contributors were men.

On the other hand, when you called a woman and asked her to go on-air, she’d say she couldn’t come into studio because she’d to pick up her kids, or she’d have to check that she had “cover”. When women did join panels, men had a tendency to talk over them – they’d to raise their voices to be heard. Women who elbowed their way in were described as “shrill”. The female voice was too “high-pitched” or “lacked authority”. There was some leeway with entertainment shows if the woman sounded young and fun, or with music shows if the woman sounded “husky”. But when it came to current affairs, the industry wisdom from the top of the management totem down was: “men don’t like listening to women”.

In my dreams, computer screens went blank and paper scripts burst into flames when the studio light came on.

Lucky me. I’d managed to get a seat at the table: broadcaster, restaurant critic, sports columnist, lecturer. Some of the questions I was asked by men: “Are you a trained chef?”, “Do you play any actual sports?”, “Have you done your PhD?”. Often, I was invited to contribute to radio pieces about parenting, childcare, and diet (I am not a dietitian). A man I was seeing at the time told me there was no point in attending an awards ceremony I was shortlisted for because such-and-such, a male journalist, was also shortlisted. I stayed at home, and won the award.

The part of journalism I enjoyed most was the writing. I’d always wanted to be a writer. Ha! A writer! That was a good one. Who did I think I was? Where was I going to get the time? Who was going to pay the mortgage, the bills, the childcare – oh my god, the childcare bill alone was eye- watering. And now I was paying for therapy on top of it.

I was tired, so tired. Something had to give, so I pulled back from journalism. I started reading again and did a creative writing course, during which I was told (by a man) that being a journalist for almost 20 years wasn’t “real writing”. Eejit.

Less work meant less stress over childcare – and more time to write. The panic attacks stopped. I didn’t need the nice therapist anymore. Eventually, I drifted into a job in the arts and was not one bit surprised to find the same battlelines being fought there by the Waking the Feminists movement. The Abbey Theatre was not programming work by women. And why were there no women on the Famous Irish Writers poster? Someone designed an Irish Women Writers tea towel as a wry alternative. I bought one but could never bring myself to dry the frying pan with Nuala O’Faolain’s face.

Casting a cold eye across the literary landscape, the writer Anne Enright summed it up: “If a man writes ‘The cat sat on the mat’, we admire the economy of his prose; if a woman does so, we find it banal.” She analysed the amount of space given over to women writers in the Irish media and found a clear bias. Not only were there fewer reviews and features about women writers, male reviewers were strongly disinclined to review books by women. I felt a shudder of recognition when Enright spoke of being asked to go on a panel “because they had no women” because “they needed a woman” because “they would love to hear a female voice”. It was the same codology I’d witnessed in broadcasting: Women are shrill. Women whinge. Would they ever just shut up, shut up, shut up.

I did shut up. I retreated to the boxroom with my laptop and I wrote stories. Some of them won prizes, most of them did not. I wrote a novel that was not good enough to be published, so I went back inside and wrote a better one. The British crime novelist PD James (note the gender neutral initials) once said, “All fiction is largely autobiographical”, before adding slyly, “and much autobiography is, of course, fiction.” My novel, The Amusements, is not autobiographical, nor is it a book about women being silenced. But inevitably, you write from experience; things you’ve observed and things you’ve been told. And women are repeatedly silenced in my book. One by one, their wings are clipped, and it’s not always men that do the clipping. Early on, the book’s heroine, Helen Grant, recites a list of unwritten rules for girls, saying, “You were cautioned many times, there was no good cribbing about the consequences.” What she means by consequences is the silent treatment, rumours, ostracization, and “From that day on you’d keep your head down.”

By the time I came out of the boxroom with my completed manuscript of The Amusements, something had changed. Men were fuming on Joe Duffy’s Liveline about the filth in Sally Rooney’s Normal People. Some male writers, alarmed by the flash mob of women that had descended onto the landscape, grumbled about a female bias in publishing. People were calling it “the Rooney effect”. This new crop of Irish writers: Megan Nolan, Naoise Dolan, Niamh Campbell and Louise Kennedy (a trained chef!) were not asking for permission to write, they were just doing it. It’s a tough business full of failure, rejection, low pay. You need to be gracious in defeat and modest in victory. I’ve been in training for this role all of my life. I don’t know what I’m doing when I sit down at my desk to work. Yet somehow, I’ve never felt like less of an imposter.

The Amusements by Aingeala Flannery is published by Penguin Sandycove and out now.

This article originally appeared in the Summer issue of IMAGE Magazine.